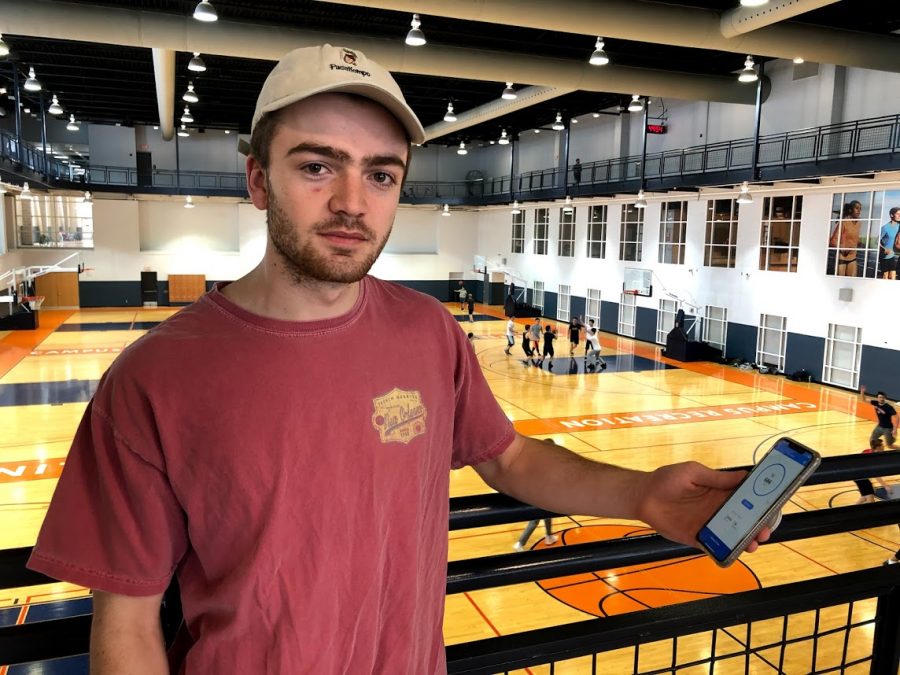 Jack Craig, freshman in engineering holds the Plyo app open on his phone at the ARC on Saturday.

A new health and fitness app rewarding students for exercising by tracking their workout sessions recently launched on campus.

Erik Riha, marketing director for the Illini Union, has partnered with Plyo to promote places, such as the Illini Union Bookstore, Quad Shop, Auntie Anne’s and Blaze Pizza.

“We liked the aspect that (Plyo) was based around health and fitness rewards and rewarding people for going to the rec centers,” Riha said.

In the past two weeks, the Illini Union Bookstore has seen two redemptions and 600 clicks on their profile in the Plyo app. Specific discounts at the bookstore include 20% off drinkware, 20% off Nike apparel and 25% off any item.

“We’re trying to tie it into what the app is for,” Riha said. “So the Nike apparel — maybe they want a new shirt or something to work out in.”

Jack Craig, freshman in Engineering, has been using Plyo since it first launched. Plyo sends a notification to your phone each time you walk into the ARC.

“It’s like I’m being recognized for being here,” Craig said. “So it is kind of supportive in that way.”

According to Peter Schultze, CEO of Plyo, the app is a health and fitness rewards platform with a mission to “inspire the next generation to live active lifestyles.”

Schultze came up with the idea back in 2017 when he was a student at the University of Minnesota.

“I was going through my own personal health and fitness journey, and I realized how challenging it was to live a healthy and active lifestyle at college,” Schultze said.

Since Plyo launched on campus, Schultze said there are around 1,000 users. However, the amount of fast food options on the health-centered app is puzzling for some students.

Normally eating at dining halls, Craig does not use the coupons to restaurants. For him, coupons to grocery stores such as Walgreens would be more beneficial.

“Of the places in town where you can get your coupons, the selection is definitely catered toward more fast-food places,” Craig said. “It does seem kind of contradictive.”

Illini Barstool, a local sports and pop culture blog, offered students free points on Plyo with a code. In a Twitter video, a Barstool worker says, “burn that gut so you can build it back up.”

“Do people get these benefits and then go to some of these restaurants and binge on foods after they’ve worked out? That isn’t healthy,” said Justine Karduck, professor in ACES.

Karduck recommends the 80/20 rule, in which individuals should eat healthy about 80% of the time and the other 20% can come from the “not as nutrient-dense foods.” Diet plays a significantly larger role in weight loss or control than fitness.

“No amount of working out is going to outrun that bad diet,” Karduck said.

Using other incentives, such as getting a massage, pedicure, manicure or new clothes, is a method to motivate yourself to work out, Karduck said.

Plyo works to have a ratio of “about 70% healthy to 30% more not-healthy restaurants. Obviously, that’s different depending on the campus we’re in and what’s available on campus,” Schultze said.

“Do you have to eat all of that in one sitting? No one says you have to. You can break it down and take it home and just put half away in a box,” Karduck said.

Schultze said his goal is to bring Plyo to every U.S. college campus. In addition, Plyo is searching for ways that would allow people to earn points outside of official campus gyms. This includes places such as dorms, apartments and other living spaces that accommodate fitness spaces.

“What we’re trying to do is break down the barriers to entry to fitness,” Schultze said. “If somebody’s working out regularly, we think it’s definitely OK to go treat yourself at the end of the week.”