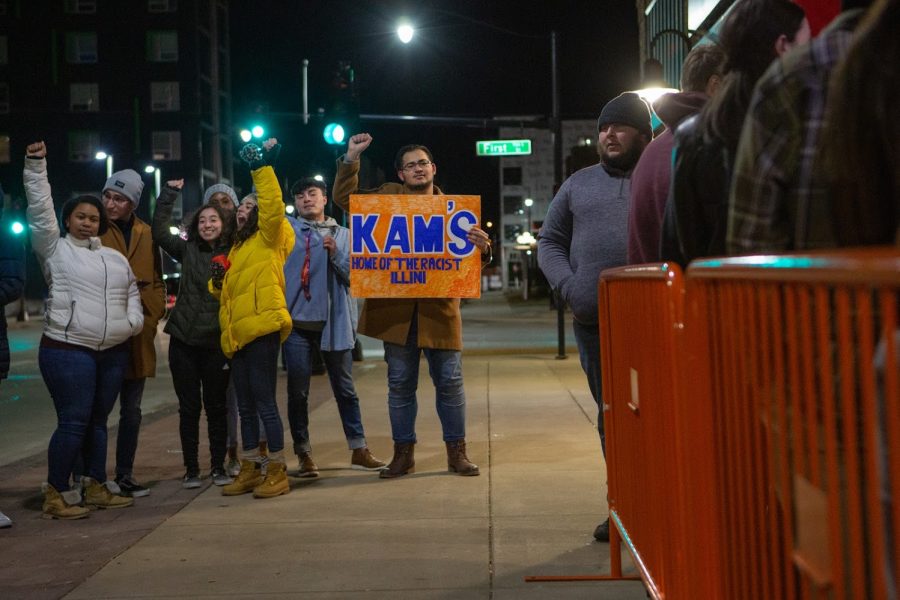 Students raise their fists in protest of Kam’s on Thursday night. Kam’s workers did not interact with the student protesters.

On Feb. 20, student activists met outside of KAM’s at 9 p.m. to protest the recently leaked screenshots of the KAM’s workers’ and past workers’ group chat. Alexander Correa, sophomore in Media, started a Facebook group soon after the screenshots came out and organized a peaceful protest to take place right outside the bar.

On the Facebook page, 127 people showed they were interested and 34 said they were going to attend the event. On the day of the event, temperatures dropped to 12 degrees, which kept some of the students from going. Gabriella Lopez, freshman in LAS, attended the protest. She said nobody wanted to be there because of the cold.

“I feel like I should be here to represent my people and be the voice that not everyone can be right now or chooses to be right now,” Lopez said.

The students who attended the protest brought a speaker and were playing Hispanic music. They stood with a poster that said “KAM’s, home of the racist Illini.”

KAM’s released a statement regarding the screenshots on Wednesday, informing the public one of the employees making the comments was terminated from the bar. Correa commented on the bar’s response to the events.

“It’s a start,” he said. “I don’t think it’s finished yet. There were other people who commented or liked the comments, and nothing has happened to any of them.”

KAM’s workers did not interact with the protesters. Other attendees refused to give comments to The Daily Illini.