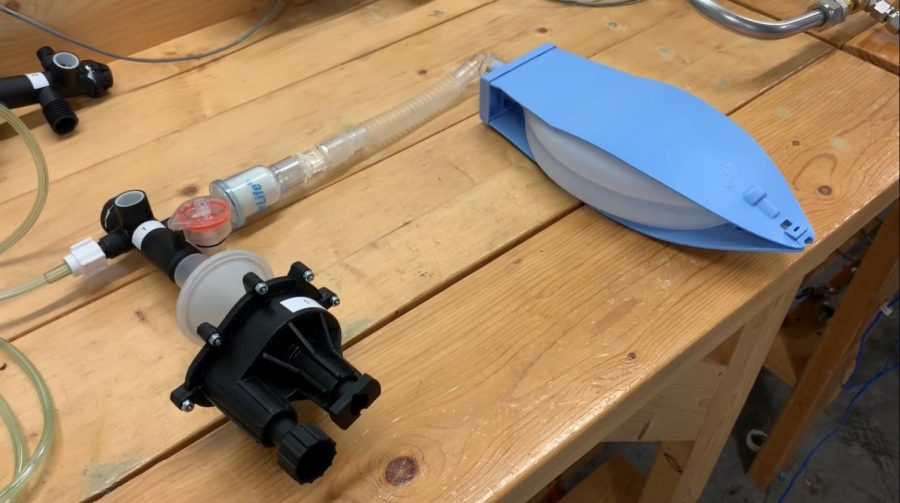 The first working prototype of the RapidVent is featured in a video on the Illinois RapidVent team’s website.

After an intense week of work, a team from Grainger and Carle Health has developed a prototype for an emergency ventilator to aid in the national crisis of ventilator shortages.

Due to the exponential growth of COVID-19 cases, U.S. hospitals are facing a detrimental shortage in ventilators, machines that can make the difference between life and death for some patients.

“There are projections from numerous sources that predict — even with social distancing and flattening the curve — ventilator demand could outpace supplies in the coming weeks in the United States,” said Rashid Bashir, dean of Engineering in an email.

William King, the ventilator project leader, said the team is “living the Apollo 13 movie,” in a press release on the project’s website.

The team working on the prototype is made up of faculty and researchers from the University, including the Grainger College, Siebel Center for Design and the Applied Research Institute. Working alongside the University are members from Carle Health, Tekmill and Creative Thermal Solutions Inc.

“More than 40 people have been at work day and night on the project since it launched on March 16,” Bashir said.

The team named the prototype Illinois RapidVent. The ventilator plugs into hospital rooms’ oxygen sources or oxygen tanks. According to the press release, the RapidVent’s runtime is over 75 hours, more than 125,000 breathing cycles. Laboratory testing has qualified RapidVent to be of the same capability to that of commercial products.

The prototype is being continuously refined with the help of doctors and medical professionals, and the team is working with partners to put in place a production plan. According to Bashir, the expected number of ventilators to be produced is still being determined.

“We identify global needs, we draw together the people from every discipline to address them and we don’t take impossible for an answer,” Bashir said.