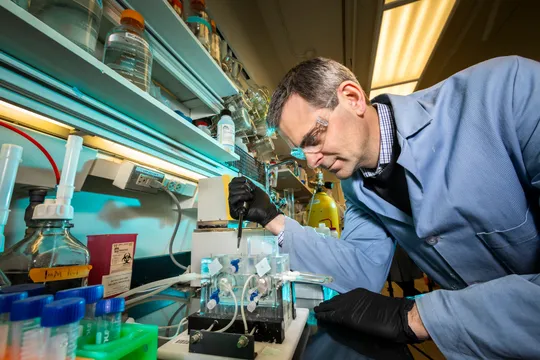 Martin Burke works in the Roger Adams Laboratory in Urbana, IL. Burke is the co-author of the new treatment being developed to treat all types of cystic fibrosis.

University of Illinois and University of Iowa have developed a new treatment that can potentially help all types of cystic fibrosis, regardless of genetic mutation.

The potential treatment uses a drug originally used to treat fungal infection to help individuals with the lifelong disease.

Cystic fibrosis is a disease that affects the lungs and digestive system, which can cause life-threatening damage if not treated carefully. As there is no cure for the disease, there have been many treatments created to reduce symptoms and health complications over time.

“What my lab has been working on for about 15 years now is the development of a different strategy where we take small molecules of drug-like molecules and try to find ones that can replace the missing CFTR proteins acting like a prosthesis on the molecular scale,” said Martin Burke, a chemistry professor and the associate dean for research at Carle Illinois College of Medicine.

Cystic fibrosis is a genetic disease that can cause lung infections because the CFTR anion channel is dysfunctional. This means individuals do not have the proteins needed to fight off infections.

“In a person with CF, they’re missing the CFTR anion channel function and as a result, unfortunately, they get lots of different lung infections,” Burke said.

There are numerous types of cystic fibrosis diseases that can affect people differently, which is why there are different treatments available depending on the individual’s condition. Not all treatments work for those with severe cases of CF.

“The only other treatment right now that can address the real defect is called CFTR modulators. They were developed by a company called Vertex Pharmaceuticals, which is in Boston,” Burke said. “These are drugs that you take that have molecules binding to the CFTR proteins, the problem is that some people with CF have mutations that cannot respond to those modulators.”

This newfound research would help cystic fibrosis development, as it could potentially treat any type of CF regardless of how severe it is. The drug used in the new treatment is called amphotericin, which was originally used to treat fungal infections.

“What’s nice about the molecular prosthetics approach is that it’s completely independent of the CFTR protein and therefore, in theory, it’s independent of the genotype,” Burke said. “It doesn’t matter what mutation you have. The hope is the same approach could work for everyone and it can work perhaps uniquely for the people with nonsense mutations who can’t respond to the model.”

In order to develop this treatment further and translate this research into hospitals, a company called Cystetic Medicines was created by Burke to advance the project further.

“The goal is to raise the funding and get all the right people involved to try to translate this into the clinic and thereby help people with CF,” Burke said. “We’re in active discussions with the Cystic Fibrosis Foundation and many other possible partners to figure out how to do that.”

The lab received a grant from Emily’s Entourage that helped key aspects of the research develop and aid those with CF.  The foundation was founded by Emily Kramer-Golinkoff, who has cystic fibrosis and a pair of nonsense mutations, and she funded the program to help make a difference.

As the treatment continues to develop over time, the team hopes to expand their work into clinics, though there has been a struggle to continue these efforts during the COVID-19 situation.

“We are currently working with expert physicians and doing everything possible to test the efficacy of this approach as safely as possible in people with CF,” said Rajeev Chorghade in an email, a doctoral student working with Burke.

Due to the COVID-19 issue changing the original plans of the treatment, the team does not know when the research will be available to the public, but they are actively trying to proceed with the project and connect with others.

“Ultimately, we hope that this approach can benefit people with CF, especially the approximately 10% of whom cannot benefit from the amazing recent advances with CFTR modulators such as Trikafta,” said Chorghade in an email.