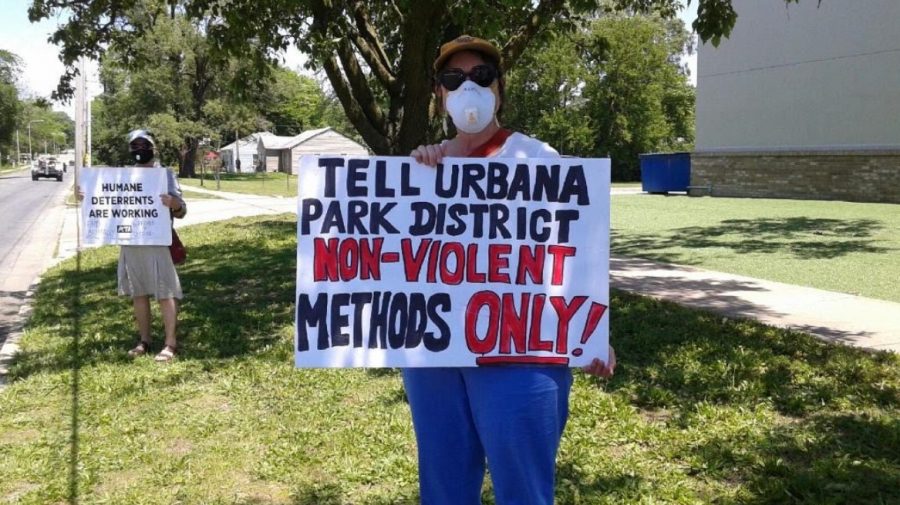 A protester holds a sign at the corner of Park Street and Broadway Avenue in Urbana, IL.

The Urbana Park District has voted to move forward with a Charity Harvest permit application which could kill 60 to 100 geese this summer at Crystal Lake Park.

Protesters have been demonstrating biweekly at the corner of Park Street and Broadway Avenue with signs such as “honk for the geese” and “cancel the goose massacre,” calling for an end to the Charity Harvest.

The UPD must first apply for a Charity Harvest permit from the Illinois Department of Natural Resources (IDNR). Once the goose meat is processed by the United States Department of Agriculture, it will be donated to a food bank.

Ben Williams, urban waterfowl project manager at the IDNR, reviews Charity Harvest permits. According to Williams, people apply for permits when there is an “overabundance” of geese in an area “to the point where the management tools that they’re using aren’t sufficient enough to control the population.”

In approving permits, the IDNR requires the park solicit community input and feedback, as well as try a multitude of non-lethal management tools and tactics before considering a Charity Harvest.

“We like to see records of how much time and money they’ve spent. Did they give an honest effort?” Williams said.

According to Williams, the UPD has implemented other management techniques for the last 8 to 10 years, including coyote and dog decoys to scare the geese, modifying the habitat and a nest and egg management program to make eggs in active goose nests non-viable.

The harvest program is meant to “reset the clock” so that non-lethal management techniques are more effective in reducing the goose population.

Investing over $2.5 million into restoring and improving Crystal Lake Park this year, the UPD believes it is important “to ensure the goose population is controlled and investments in new landscaping and park improvements are protected from degradation.”

Local activists believe the UPD has been neither consistently nor effectively executing non-lethal measures.

Protesters are calling on the UPD to halt the harvest for one year and implement the activists’ proposal, which includes additional humane management strategies.

One component is planting more native grass to deter geese and egg addling, a process in which fertilized eggs are taken from active nests and embryo development is terminated before being placed back in the nest.

“It’s absolutely, totally unnecessary to slaughter those geese when there are a plethora of non-violent options,” said Cynthia Adkins, a local protester.

The UPD website has cited traffic issues, public health concerns from goose feces and the degradation of turf quality as negative impacts made by geese.

“What we’ve seen when we have private conversations with them is that the Urbana Park District knows that geese are not responsible for the ecological problems at Crystal Lake Park,” said Ilir Sulejmani, protester and creator of a petition to stop the goose killings.

According to Sulejmani, the UPD can “reasonably assume” a lakeside restoration project, new stormwater management system and prohibition of human chemical runoffs in the lake would bring the poor water quality back to a healthy level.

Suljemani says the UPD is not adopting their proposal.

“If you press them they’ll admit that it’s (because of) things like people complaining that they canceled wedding photos,” Sulejmani said. Another concern given was that some visitors are worried their children might try to eat the goose feces.

Some protesters are also willing to volunteer to clean up the feces themselves.

“We’ve had people come up and say, ‘oh my gosh, we come to the park for the geese, for what they do for our health,’” said local protester Hunter “Patch” Adams.

If the permit is approved, the harvest will be handled by the USDA Wildlife Services program in early June or July, when geese molt their flight feathers and lose the ability to fly.

According to Scott Beckerman, state director of Illinois Wildlife Services, the birds are surrounded with a net and transferred to cages designed to transport domestic poultry.

The geese are then transported to an Illinois Department of Agriculture Type II Poultry Processor, where they are euthanized and processed in the same manner as domestic poultry.

Lisa Levinson, wild animals campaigner for In Defense of Animals, says this causes suffering for geese. Waterfowl “hold their breath for long periods of time and so being gassed if you’re a bird that’s used to going underwater is much much more painful and excruciating,” Levinson said.

According to Beckerman, in some cases a Charity Harvest may be conducted in two consecutive years so the site managers can achieve their local goals. Geese populations may slowly build through time and therefore Charity Harvests may be revisited after 7 to 10 years.