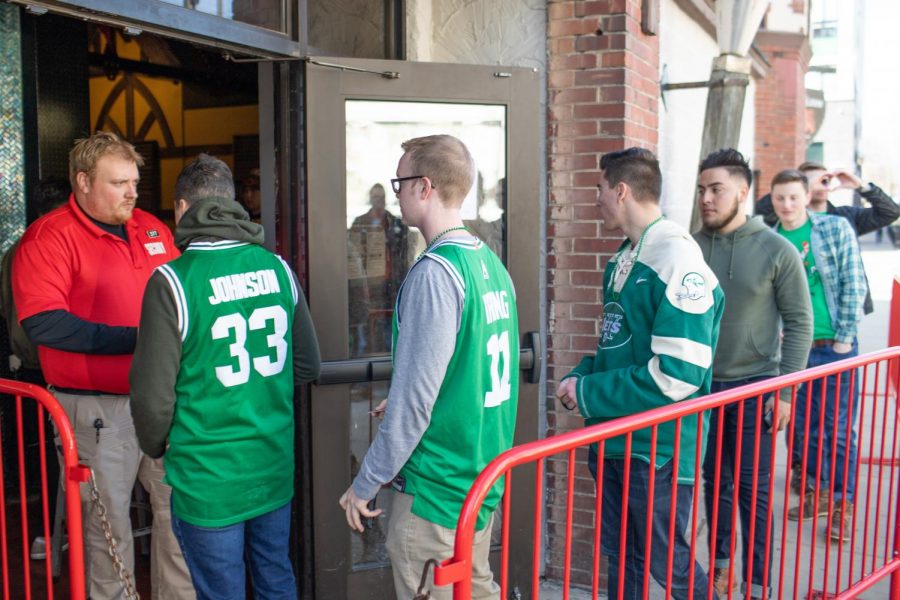 Students wait to enter Red Lion on March 1, 2019 during Unofficial.

A conversation about racial profiling in the Champaign-Urbana community arose when Taliah Ray, senior in LAS, decided to speak out about her experience at Red Lion on social media. Various other individuals had come out to sympathize with her as they had similar experiences at The Red Lion and KAM’s.

Ray decided to go to The Red Lion with her friends and was told that the cover fee was $5 if you had your I-card and $20 without it, but she noticed that a few guys in front of them didn’t have their I-cards and only had to pay $5 to get in. That was one of the first red flags Ray had noticed before the situation got a bit more complicated.

“Security Guard #8 told my friend that she can use the bathroom and she was about to go to the restroom and then Bouncer #312 grabbed her by her dress and pulled her by her stomach. My other friend walked up and she was like ‘Wait, what’s going on,’ then Bouncer #312 pushed my friend back,” Ray said. “There was also a group of white boys in the bar recording and laughing at the incident. It was just like a very humiliating, upsetting experience and I will never be back there. I never want to experience that again.”

After Ray shared her experience on social media, she quickly realized others have encountered similar experiences at these establishments.

“I’m just really disgusted with what happened, disgusted with all the stories that I’ve seen on Twitter and there needs to be a change immediately, quickly because this can’t keep happening to people,” Ray said.

She created a petition in order to take a stance on the situation and hold the establishment accountable for their actions.

The petition states that people should boycott The Red Lion until they meet the list of demands that the petitioners call for.

The demands are as follows: issue a public apology addressing the on-going discriminatory practices against Black and Brown students and detail specific actions The Red Lion will take to address concerns, fire Bouncer #312 and Security Guard #8 who practiced discriminatory entry policies and physically assaulted two women on the premises, instituted mandatory diversity and ethics training for all employees, and hire additional Black and Latinx employees and managerial staff.

“The petition particularly calls for students and the broader community to boycott Red Lion until the establishment issues a public apology that addresses their ongoing practices and their practices that discriminate against Black and Brown students, including my incident and all the other incidents that people mentioned when I brought my story up,” Ray said.

Tafadz Diener, recent FAA graduate, had a similar experience with her friends at KAM’s. Diener was also told she had to pay $20 to get into the bar as she forgot her I-card but tried finding her University identification online as an alternative. She was turned away from the bar and had to leave the establishment instead.

“I was texting a friend who was like five or 10 minutes behind me in line, and it was a group of white people and they didn’t even have to show their I-cards. So it was very clear that there were particular signals where they would start asking for I-cards, and I think it’s pretty obvious it was because of skin color,” said Diener.

Diener believes that this is an ongoing issue at these establishments that needs to be addressed by KAM’s and The Red Lion. She hopes that they implement change immediately so this does not happen to others in the future.

“It’s just kind of ridiculous that people of color go in. They get charged $20 to go to the bar, and then they do pay full price for these drinks and they have to wait longer periods of time to even get their drink orders taken. I’ve stood there for long, long periods of time and then a white boy just walks up and immediately is helped and it’s infuriating,” Diener said.

The Red Lion and KAM’s have not released an official statement but have responded to an initial inquiry about the subject and will be looking into these issues in order to address concerns.

“(The) Red Lion and KAM’s absolutely does not allow any sort of profiling whatsoever. So it’s disturbing to hear that people have said they have been profiled. We would like not only the opportunity to understand what people are saying, but also the opportunity to respond,” management said.