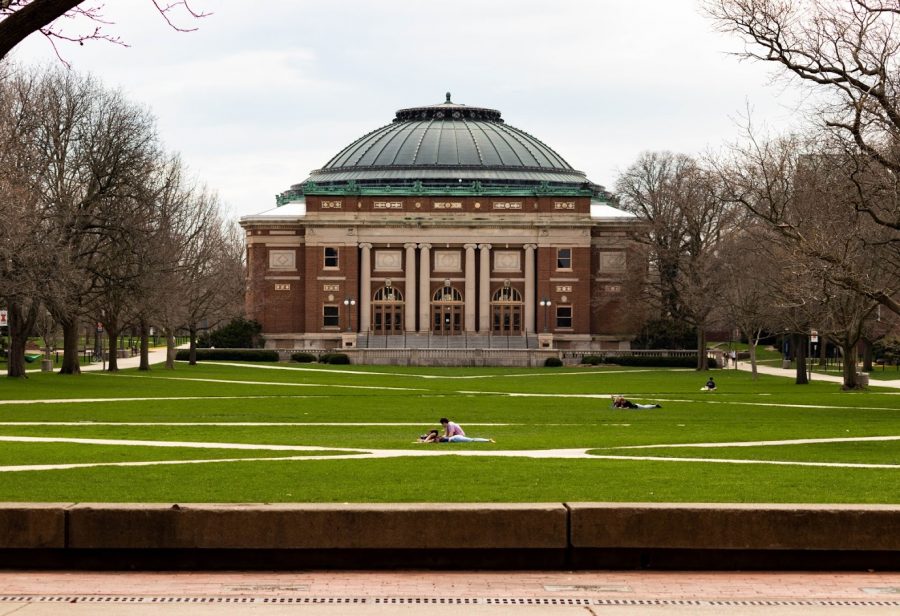 The main quad remains relatively barren at 1:48 p.m. on April 3 as many students have left campus due to the coronavirus.

University students all over the country and world wait anxiously for the major decision: Will students return to campus this fall?

Days ago, the sibling Big Ten school, the University of Wisconsin-Madison, announced that students will return to campus this coming semester. This week, it is the University of Illinois’ turn to make a decision.

As part of the evaluation for the decision, the University COVID-19 task force team requested feedback through a survey that was emailed to the entire University population. The email included that the University was trying to “ensure they are considering a range of perspectives.”

This survey came shortly after a report draft about Fall 2020 instruction. Though giving no concrete decisions, the draft weighed potential instruction models and evaluated options. Among these possibilities was the recommendation from the SHIELD team to “terminate face-to-face instruction on November 20, the beginning of fall break. The final eight days of instruction along with six days of final exams would be conducted remotely.”

The University of Notre Dame is one school that has decided on this model.

Robin Kaler, associate chancellor for Public Affairs, said that the survey was sent to seek input from the campus community.

“We received lots of responses from students who want to know things like what housing and dining will be like and what the blend of online and face-to-face instruction will be,” she added.

Kaler stated that the University and task force team anticipate that they will be ready to share a plan this week.

“Returning to limited face-to-face instruction will require the state moving to Phase 4 of its ‘Restore Illinois’ plan, as well as the University having sufficient testing and exposure notification systems in place and quarantine/isolation capacity for residence hall residents,” Kaler explained.

Arnoldo Ayala, senior in LAS and Speaker of the Senate for the Illinois Student Government, was asked to be a part of the planning task force. He explained that the task force has discussed classroom sizes, large lecture-style classes and the possibility of bringing students back to campus in waves depending on their year in school. They are also discussing what instructors and faculty must do if one of their students is diagnosed with COVID-19.

“For the most part, student opinions are being taken in, but it is hard to get a point across, seeing as the taskforce has a lot of members who are mainly faculty,” Ayala said. “From my experience, faculty opinion is being considered more but that can also be because of how many more faculty members there are than students (on the task force).”

He added that he has contributed to the discussion with what students have told him in regards to their experiences with online classes — most were not fans.

“I have also contributed to the topic of housing and living and how there needs to be extra precautions taken, especially in the dorms, where there are so many people living so closely together,” Ayala commented.

Though Ayala said he would feel safe returning, he said it is because he is not considered at-risk. For other students of higher risk, the idea of reopening may not be ideal. He added that if students do not want to return, they should be encouraged to take the steps they need in order to ensure the health of themselves and their families.

“Seeing as other Universities have announced that they are opening, I would not be surprised if UIUC plans on opening back up in the fall with in-person classes accommodated to fit the CDC guidelines,” Ayala stated.

Ayala said that the University should be reaching out to students and taking their opinions into consideration.

“The taskforce has fewer students than faculty, and I think they should reach out to students more to see how their plans may impact them,” he added.

The feedback survey seems to be a step in this direction.

Maggie Furr, a rising junior in ACES, commented that the sudden transition to online this past semester was not an easy one, and labs were no longer useful; her coursework overall became more rigorous. It was difficult for professors to just switch their teaching format, she added.

Furr explained that her major requires a lot of lab classes that are next to impossible to function remotely as online classes.

If Fall 2020 instruction is online, “there’s a good chance that they’ll just cancel (labs) entirely and push back when I and many others will be able to graduate,” Kurr remarked.

Kurr mentioned that both the survey and email update seemed somewhat vague, neither providing many details about how a “hybrid” model would look and instead giving a timeline of when decisions were to be made.

“It definitely helped a bit knowing that they are trying to figure out ways to be as safe as possible while having in-person classes, but again I think a little bit more description of what they mean by the ‘hybrid’ classes would be even more helpful,” Kurr said.

Overall, Kurr believes that the University has handled COVID-19 as best as it can.

“It’s really easy to judge as a student and say that they’re not doing enough, but if I was in the administration’s position, I probably wouldn’t do anything different,” Kurr commented. “The professors had two weeks to transition their classes online, which is something they’ve never had to do before.”

She added that the University also put out a $1000 grant application for students who were struggling with groceries, rent and other financial responsibilities.