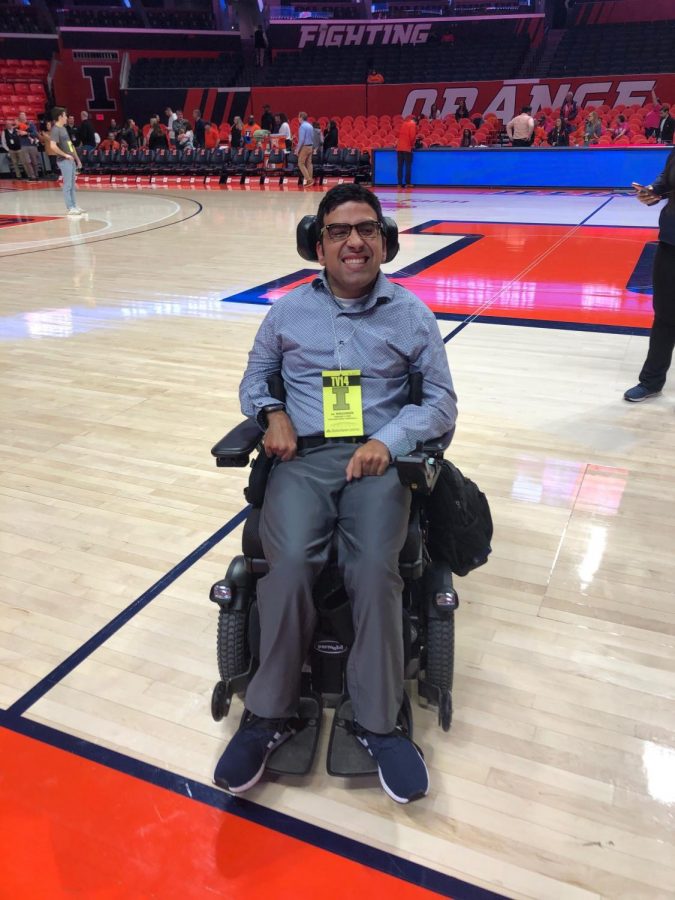 Junior Zain Bando poses for a photo on the court at State Farm Center. Bando called for the University to be held accountable for the closing of Beckwith Residential Support Services Program, which provides support and amenities for students with physical disabilities.

Students and their families are calling for the University to be held accountable over the closing of the Beckwith Residential Support Services Program, which provides support and amenities for students with physical disabilities.

Zain Bando, junior in Media, is one of the students leading the movement. Earlier in July, Bando filmed a video expressing his concerns about the lack of available Americans with Disabilities Act-regulated rooms in Nugent Hall, which immediately gained traction on social media and quickly caught the attention of the University.

Eventually, the students regained access to their rooms, but the Beckwith program remains closed. Bando and his peers along with some of their family members, met with the Beckwith administration over a Zoom call to discuss possible solutions in reopening the program.

“They were basically set in their decision, which is why we decided to make the petition,” Bando said. “They were arguing that for whatever reason they thought scattering us across campus would be safer than us living in the one wing on the first floor that we’ve always lived in.”

As the dispute gained media attention, the University communicated to the students and their families that the inability to reopen was due to a lack of personal assistants, who help the students with daily living tasks.

Robin Kaler, spokesperson, said that despite a great deal of effort by the University, the students and their families, they were unable to secure enough PAs to operate the Beckwith program this semester. She cited one of the causes as an extra shortage of human services workers due to the COVID-19 pandemic.

Kaler added that the University assigned students who were able to secure PA coverage accessible rooms in the residence halls, but the University cannot provide the level and quality of care necessary to operate the Beckwith program this semester.

Bando and his peers created a list of correspondence links found at the bottom of the petition which include various emails, legally obtained phone calls and other documents. The petition description says the program’s closing was actually due to issues of liability.

Saba Bando, Zain’s mother, reached out to the director of Division of Rehabilitation Services at the Illinois Department of Human Services, Rahnee Patrick, who wrote the following to Bando:

“The issue is UIUC decided not to continue the program because of liability issues to the University,” Patrick wrote in the email. “The school decided because the assistants have to provide close contact when assisting students with disabilities that the University didn’t want to be liable for continuing the program.”

Bando said that as much as he loves the University, he feels they could have handled the situation more professionally and been more openly transparent with him and his peers about the whole situation.

“The only thing that we got out of this was the rooms. And now the second petition is basically just to raise awareness on how the University basically lied to us the entire time about the real reason the program closed, and I just wanted people to understand that it wasn’t okay,” Bando said.

The second petition titled “Wake Up U of I! Stop Discriminating Against Disabled Students,” currently has over 4,000 signatures with a goal of 5,000 total.

Lauren Bryant, graduate student in Education, said she believes Beckwith is often overlooked by a lot of members of the University administration.

One of the new challenges Bryant and her peers are facing is regaining access to the “floater” room in their hallway. Floaters are rotational PAs which help with emergency tasks and other tasks a PA would assist with when they are on shift.

“It’s such a petty thing for them to take away from us, because it’s a room. It’s not a room that you need right now because there is like nobody here, so that’s kind of our next battle, getting access to that room back,” Bryant said.

Bryant and her peers took matters into their own hands by building their own version of the program. The group found their own PA staff. Bryant, who was in charge of finding and scheduling floaters, said she found staff for the entire semester.

“I don’t really understand how I, one very small person, could accomplish this when somebody’s job is literally to do this and apparently couldn’t get it done in the five months that we were gone,” Bryant said.

Bando said he wishes he and his peers could have had more direct involvement with the University regarding the decision to close Beckwith.

“I really hope that in the future, this leads to permanent changes,” Bando said. “Because at the end of the day, this isn’t really much about me and my peers and this group. It’s about future classes and trying to live on the legacy that Tim Nugent created a very long time ago and trying to make Illinois as inclusive of a campus as possible.”