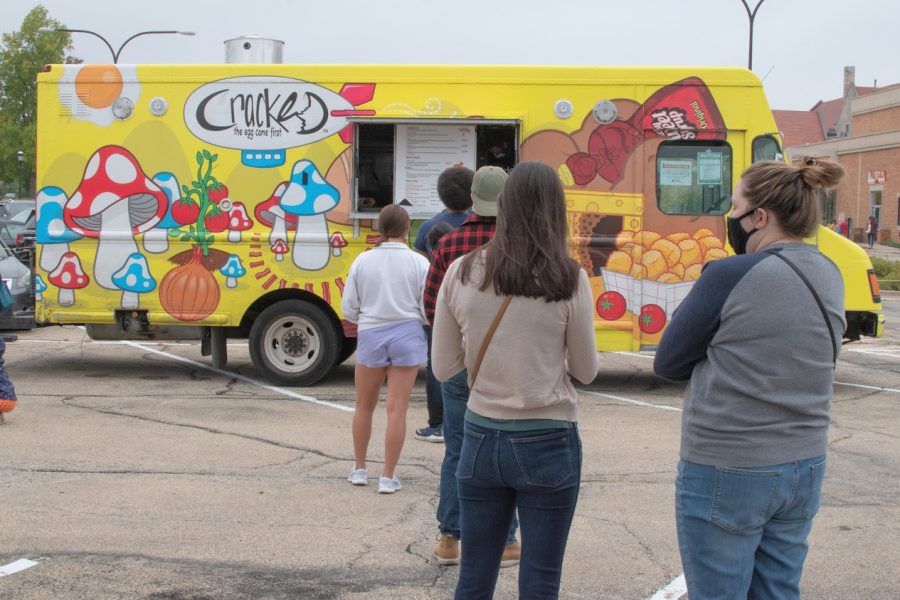 People wait in line to order at the Cracked the Egg Came First food truck at Lincoln Square Farmers Market in Urbana on Saturday.

The Cracked: The Egg Came First Truck will be moving to Gary, Indiana after the Lincoln Square Farmers Market in Urbana this Saturday.

The food truck has been operating in Champaign-Urbana since 2012, while the Cracked storefront on Green Street has been open since 2017.

In order to say thank you and goodbye, Cracked owner and University alumnus Daniel Krause wrote a letter to the C-U community thanking them for their support over the last 10 years.

“Our ultimate goal is to bring the same food truck culture to Gary as we have seen grow in C-U,” Krause wrote in the letter. “We can only hope to have the same amazing experience there as we’ve had in Champaign-Urbana.”

Although the truck will be feeding customers from around 125 miles away, the storefront located at 619 E Green St. will remain open.

At first, the plan was to move the truck in front of an old steel mill in Indiana, but with the COVID-19 pandemic, plans were changed and with the amount of people that would’ve gathered there, it just would not have been possible, Krause said.

The City of Gary has been working with Krause in order to get a plot of land that is usable in order to start selling food.

“COVID was making everything impossible so then the City of Gary really jumped in and moved us to this vacant land they had available,” Krause told The Daily Illini.

Krause added in his letter that the ongoing COVID-19 pandemic has struck the business pretty hard. Along with other food and beverage industries, Cracked had to figure out other ways to make sure their doors can stay open.

While it is a tough time for everyone, in his letter, Krause encouraged everyone to support local small businesses during this time. However, working on a new project and getting ready to move the truck has been exciting during a time where positive news has been minimal.

A new Cracked location was also opened in Chicago earlier this year but was impacted hard when the pandemic took over in March.

“It’s been a real shining light in a really grim, horrible year,” Krause said. “And so we get to work on this new project and get creative.”

In its new location, the food truck will be operated by someone from Gary, but Krause will travel there for a couple weeks to get it up and running. After that, he will come back to Illinois, but may “go back and forth every once in a while.”

“We look forward to having another amazing 10 years slinging breakfast sandwiches to the entire Champaign-Urbana community,” Krause wrote at the end of his letter. “Thank you again for everything you have given us over the years, we are truly in debt to this community forever.”

Krause said it’s been a fun experience to work with the City of Gary and an interesting project to be a part of in general. He also recognizes the significance C-U has had on his company.

“It’s been a pleasure to have the truck on campus, and it has been the catalyst for my company to get started,” he said. “So, so much thanks to the community.”