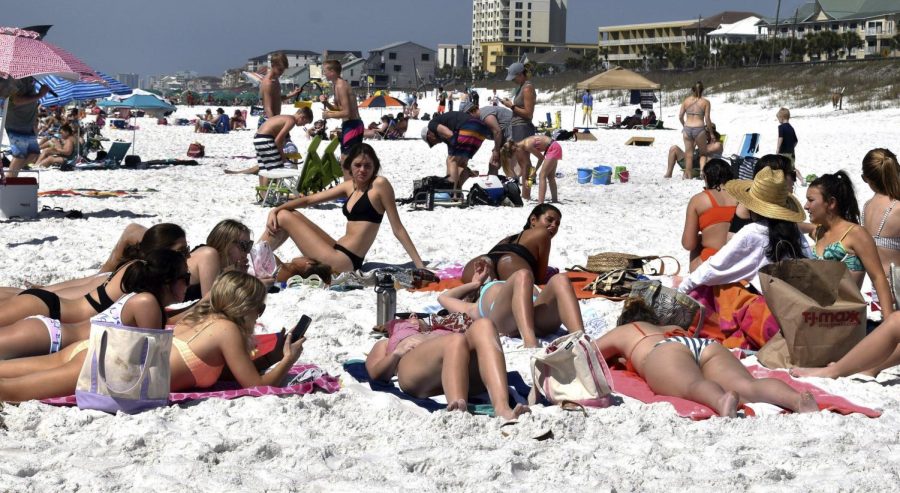 College students lie on Miramar Beach near Destin, FL on March 16 during spring break. The University of Illinois is considering canceling spring break this year.

The University is potentially planning to cancel the originally planned spring break and push back the semester by one week, due to the ongoing COVID-19 pandemic. The semester’s original end date and finals week would stay the same and commencement will still be scheduled for May 15.

Spring break was originally planned for March 13 to March 21. The new plan would be for the start of the spring semester to be on Jan. 25 instead of the original date Jan. 19.

The plan was proposed at the Senate Executive Committee meeting on Monday.

This plan would also add three noninstruction days where students would have no classes on Feb. 17, March 24 and April 13.

This plan is still pending academic Senate approval. Once the Senate votes on this proposed plan, public messages from University officials would go out to students, staff and faculty fairly quickly.

“This is a change to the academic calendar, and it is the Senate that calls the shot on this so we have to wait for that vote and that approval before we do anything,” Vice Chancellor for Academic Affairs Andreas Cangellaris said at the meeting on Monday.

The plan will be proposed for approval at the next Senate meeting on Oct. 19.

Senate Executive Committee chair Rob Kar said he does not think there will be any controversy in the idea where the University will eliminate a period of time where the students are away for a period of time and then come back in the middle of the semester.

“But I could imagine just more discussion about this issue in some way than is on the consent agenda,” Kar said.

For the fall semester, in-person instruction will end after Thanksgiving break, which is from Nov. 22 to Nov. 29. Canceling spring break and starting the semester later will hopefully reduce the amount of travel on and off campus and will give anyone arriving back to campus time for tests, isolation and quarantine, the News-Gazette reports.