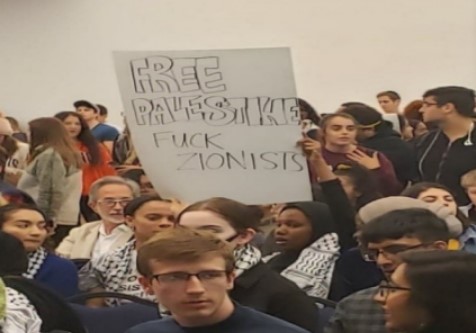 Students protest at an ISG meeting on Oct. 23, 2019. The ISG was debating a resolution regarding the conflation of Anti-Zionism with Anti-Semitism.

Jewish organizations have publicized a Title VI federal complaint with the Department of Education’s Office for Civil Rights against the University for inadequately addressing a hostile environment of anti-Semitism on campus.

The complaint, filed March 27, was publicly shared on Oct. 23 by the Louis D. Brandeis Center for Human Rights Under Law, a non-profit organization that engages in legal advocacy to combat anti-Semitism.

Merriam-Webster defines anti-Semitism as “hostility toward or discrimination against Jews as a religious, ethnic, or racial group.”

Title VI of the Civil Rights Act of 1964 prohibits discrimination on the basis of race, color and national origin by educational institutions that receive federal funds.

The complaint specifically alleges that Jewish and pro-Israel students on campus have been discriminated against on the basis of national origin, as their Jewish identity falls under the domain of “shared ancestral or ethnic characteristics,” according to Alyza Lewin, president of LDB.

Brad Schneider, U.S. Representative for Illinois’ 10th Congressional District, says there has been a rise in anti-Semitic incidents across the country and the University in particular.

“In my mind, there’s no question that Jewish students are facing a greater number of anti-Semitic events on campus, and the University can do a better job at addressing them,” Schneider said.

Multiple incidents of anti-Semitism on campus dating back to 2015 are listed in a summary of the complaint.

This includes the vice chancellor removing a Jewish student from the Campus Student Elections Commission during a discussion about divesting from Israeli companies and a debate over an Illinois Student Government resolution condemning the conflation of anti-Zionism with anti-Semitism, in which some students held up signs labeled “Free Palestine, F— Zionists,” and “F— Nazis, support Palestinians.”

The complaint also details multiple instances of rocks being thrown through windows of Jewish fraternities, swastikas drawn around campus and vandalization of the Chabad Center for Jewish Life menorah.

Ian Katsnelson, junior in LAS, says he has been labeled as a white supremacist, genocide supporter and a “neo-colonialist” during his time on campus because he is Jewish.

During his time as a senator for ISG, Katsnelson says he was “consistently excluded” from collaborative work on legislation such as racial justice because he is Jewish.

Lewin says a problem is that many people don’t understand the various forms anti-Semitism can take today.

In addition to “traditional” anti-Semitism, such as swastikas, Lewin believes that anti-Zionism, or “opposition to the establishment or support of the state of Israel,” according to Merriam-Webster, is also anti-Semitic.

“Zionism is a key, integral part for many Jews of what it means to be Jewish,” Lewin said.

According to Lewin, anti-Zionist rhetoric marginalizes Jewish students because it implies one must shed their ethnic pride and ancient connection to the Jewish homeland to be accepted.

One complaint alleges that in April of last year, members of Students for Justice in Palestine, an anti-Zionist organization advocating for Palestinian rights, spat and yelled: “Nazi” and “white supremacist” at a member of the Illini Public Affairs Committee, which is a pro-Israel student organization.

Abby Fogarty, a second-year masters student in Information Sciences and member of SJP, says this did not happen.

“We believe in standing up and fighting for the rights of all marginalized and oppressed groups … we don’t believe in bringing anybody else down in such a way,” Fogarty said.

Forgarty says Zionism is a political ideology with no religious context.

“The Israeli state was formed on the exodus, the forced removal of Palestinians from their homelands,” Fogarty said. “The fact that we are here just fighting for Palestinians to exist should not be labeled as anti-Semitic.”

“(Zionism) does not diminish or deny the Palestinians’ aspiration for a homeland of their own,” Schneider said.

According to Robin Kaler, associate chancellor for public affairs, the University has not been contacted by the OCR regarding any official complaint.

“We remain optimistic that we can work with members of the Jewish community to identify a path forward to address these issues together,” Kaler wrote in an email.

The complaint filed was “unusual in its length, its detail, its complexity, so it’s not surprising that it’s taking the Office of Civil Rights some time to go through it,” Lewin said.