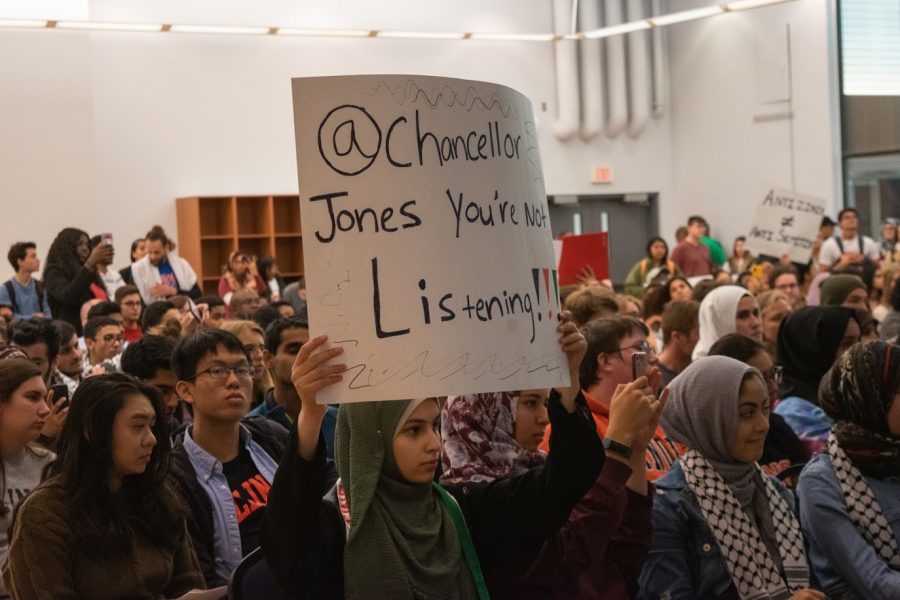 Members of the Students for Justice in Palestine organization protest during the Illinois Student Government Meeting at the ARC Multi-Purpose Room on October 23, 2019. A lawsuit between Speech First and the University was settled on Feb. 2.

The University of Illinois and free speech organization Speech First settled an ongoing lawsuit regarding a number of the University’s policies regarding bias and speech. This settlement came days before Speech First planned to submit the lawsuit to the Supreme Court of the United States.

The lawsuit, initially filed by Speech First in May 2019, alleged that policies held by the University’s Bias Assessment and Response Team and University Housing’s Bias Incident Protocol, sections of the University’s student code and the University’s procedures for imposing No-Contact Directives violated students’ First and Fourteenth Amendment rights.

Speech First’s lawsuit argued that BART and BIP protocols led to investigations of students who shared controversial opinions about contentious issues such as the Israel-Palestine conflict and the University’s former mascot, Chief Illiniwek, which has been criticized and subsequently removed from campus for being deemed racially insensitive.

The lawsuit was settled in an Illinois District Court on Feb. 2 with no money paid to or by either party. Associate Chancellor for Public Affairs Robin Kaler expressed that the policies in question contribute to fostering an open and safe campus community.

“The University is pleased that Speech First agreed to drop its lawsuit after both the district court and appellate court ruled in the University’s favor denying Speech First’s motion for (a) preliminary injunction,” Kaler said in an email statement to The Daily Illini. “The courts rejected Speech First’s unfounded claims after the University showed how our policies and practices foster a community where tens of thousands of students and over a thousand registered student organizations freely express and vigorously debate beliefs spanning the ideological spectrum.”

Speech First did not immediately respond to The Daily Illini’s request for comment.

The terms agreed upon in the settlement clarified that neither BART nor BIP has the authority to enforce discipline on a student. Additionally, students cannot be disciplined for declining to speak with BART or BIP.

The settlement also limits the circumstances under which a No-Contact Directive can be issued. Under the terms of the settlement, an NCD can only be issued when “a Disciplinary Officer determines that the speech is accompanied by allegations of an actual or foreseeable Student Code violation, such as sexual harassment or stalking.” An NCD prohibits contact between two or more parties, usually following a verbal or physical altercation.

Part of the lawsuit aimed at the former section 2-407 of the University’s student code, which prohibited students from distributing “leaflets, handbills and any other types of promotional materials of candidates for noncampus elections,” unless the student received prior approval from the University. The University eliminated this section from their student code in July 2019, after the initial lawsuit was filed. In accordance with the settlement, the University cannot reinstate the removed provision.