Students protest UI’s use of deadnames during commencement ceremony 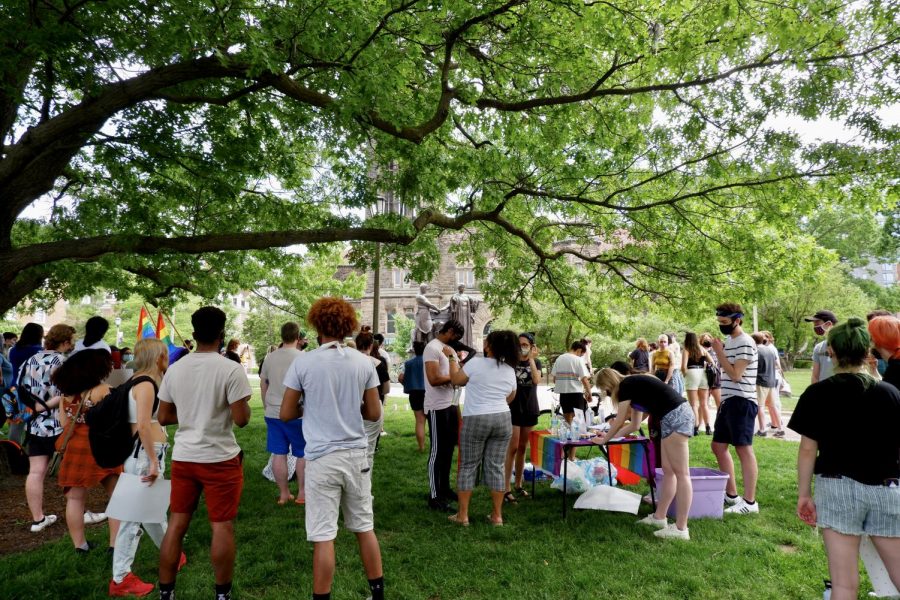 A large crowd of people congregate in front of Alma Mater passing out transgender flags and stickers on Saturday. University students protested the use of deadnames during the most recent commencement ceremony.

By Amrita Bhattacharyya, Interim Editor-in-Chief
May 24, 2021

Students protested in front of Alma Mater Saturday after multiple instances occurred of transgender students having their deadname called when walking the stage during graduation.

Merriam-Webster defines “deadname” as “the name that a transgender person was given at birth and no longer uses upon transitioning.”

Around 60 people gathered for the protest Saturday, with people passing out stickers of the transgender flag colors and multiple speakers making statements.

The event kicked off with Cyrus Arnieri, recent graduate from ACES who had his deadname called and hosted the protest, talking about his experience.

Arnieri had been sending emails back and forth with the University to ensure his preferred name would be called. However, Arnieri’s deadname was called and displayed on the TV screen for graduates waiting outside for their turn to walk.

“I just really wasn’t expecting that because I’ve been in contact with the University for a few months now,” Arnieri said.

Arnieri had his name legally changed on April 1, but it was not yet updated in Self Service. According to Arnieri, the University knows his name is legally changed and has the supporting documents.

Daniel Camacho, recent graduate of Engineering and LAS, also experienced having his deadname called when walking the stage May 14.

Having had his name legally changed during his time at the University, it had not yet been updated in Self Service, but Camacho had inputted his preferred name of “Daniel” into the system.

When registering for commencement, Camacho noticed his old legal name was inputted.

Camacho put in the phonetic pronunciation of ‘Daniel’ and contacted the Committee on Commencement to ensure that was the name which would be called. Camacho also offered to send the Committee proof of his legal name change.

“They were like ‘No need, we definitely got it,’” Camacho said.

However, when it came time for Camacho to walk the stage, his deadname was called instead.

“My old legal name is a traditionally feminine name. So in addition to it being very embarrassing and ruining the moment, I was kind of outed as trans,” Camacho said.

Camacho redid the stage crossing shortly after, with his preferred name being called.

“If I had known that that would have happened, I would have chosen to not walk,” Camacho said. “It both ruins the moment and it’s humiliating…It’s embarrassing and (deadnames are) a very personal thing.”

The University posted a statement about the situation on the Office of Inclusion and Intercultural Relations website.

“Due to changes in the timeline to produce a virtual commencement celebration and stage crossings, the new registration system required that graduate data be uploaded in late March,” wrote Robin Kaler, spokesperson for the University, in an email. “Some graduates did not have the opportunity to provide updated information that would have allowed them to cross the stage again using their chosen name.”

According to Arnieri, the statement was not sent to him or the LGBT Resource Center until it was posted on the site.

Camacho feels as though the statement could have been stronger, specifically with the University’s use of the phrase “name of choice.”

“It’s not a preference, it’s not a name of choice, it’s genuinely a person’s name,” Camacho said.

Arnieri says the statement “blatantly blames” transgender and nonbinary students for not sending in their names within a specific time.

“The office knew that I was in the process of changing my name,” Arnieri said. “I had been in contact with them for months as well.”