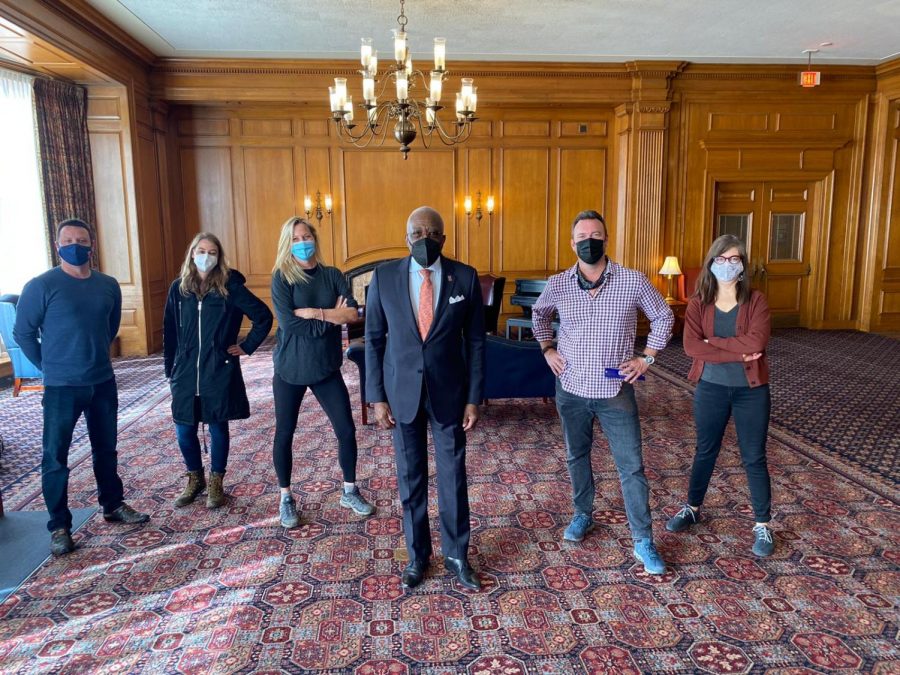 Chancellor Robert Jones poses with workers from The College Tour series. The series featured the University on April 27.

“The College Tour” series streaming on Amazon Prime featured the University, amongst other universities, on April 27. The series gives its viewers an insight on the actual campus life, from academics and sports to career opportunities.

The series is hosted by Alex Boylan, award-winning TV producer and host. Boylan also won a previous season of “The Amazing Race.”

The segment featured 11 students from different years and backgrounds, who shared their respective stories based on various topics ranging from campus involvement to research.

“It was a great experience to be featured on the college tour!” said Arnoldo Ayala, senior in LAS, in an email.
Ayala submitted a two-minute video telling his story once he got to know about the series from a group chat. Soon, he was cast on the show and had about a month to prepare his script and submit pictures for the same.

“My segment is about open access at the University,” Ayala wrote.
Once elected as a Senator for the Illinois Student Government in his sophomore year, students from the Illinois Coalition Assisting Undocumented Students Education and ISG, along with Ayala, decided to create a scholarship for students who do not qualify for federal financial aid.

“We called it the HOPE Scholarship, and it benefits a broad range of students from undocumented students, students without a permanent address and others who cannot qualify for FAFSA,” Ayala wrote, who was named as the director of the scholarship and called it a major highlight of his college experience.

“The College Tour” was inspired by Alex Boylan’s niece, Izabelle Polnaszek. After exploring colleges near Los Angeles, Polnaszek did not have the finances to fly around the country to look at other schools. The pandemic soon after and the lack of resources to travel the country resulted in doing research on colleges online.

“This is when the lightbulb went off,” Boylan said, who went on to create “The College Tour” along with his partners (Lisa Hennessy and Burton Roberts), a series that showcases authentic stories told by current students attending the university.

Boylan added that the team knew that they had to stay true to the University and the students in order to make this series real while serving the purpose of education and inspiring the next generation of prospective students.

“U of I is a really special episode,” Boylan said, regarding why the University was chosen to be a part of the series.  “This is my Co-Executive Producer’s (Lisa Hennessy) Alma Mater.  So going in I knew this was going to mean a lot to her and all the alumni of U of I.”

Boylan further added that he was very impressed with the attitude of the students featured who showed confidence in delivering their lines on camera in front of the producers.