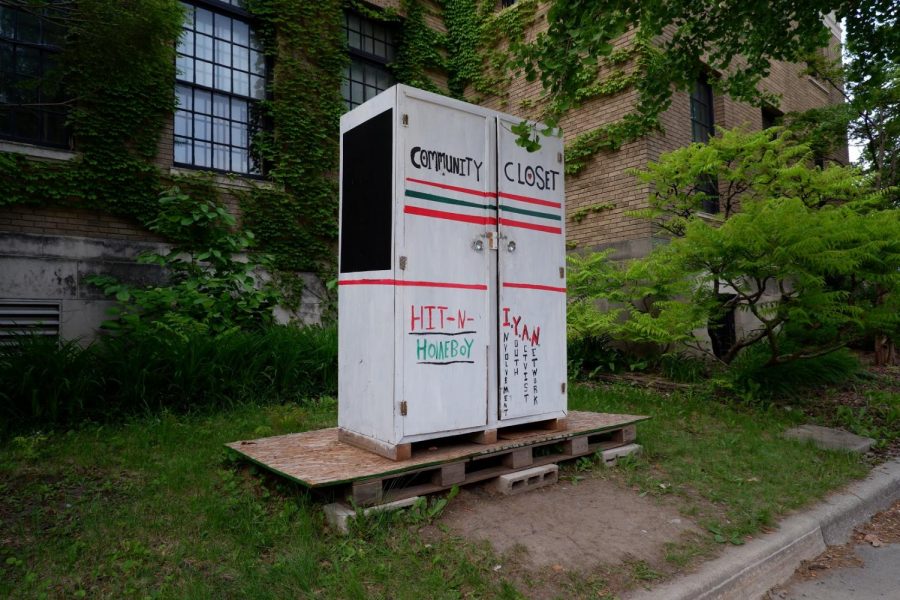 The Community Closet stands next to the Independent Media Center in Urbana on June 6. The closet is intended to help others who can’t afford clothing in the Champaign-Urbana area.

Ayan Harris, 18-year old activist, has been taking care of a “community closet” in the Champaign-Urbana area for those struggling to afford clothing.

“Take what you need, leave what you can,” Harris said.  “That’s really it, honestly.”

Last summer, another local activist named Marshall Allston-Yeagle started a community table at a barbershop in the community. Anybody able to leave food on the table would leave it and anybody who needed food would take it.

Harris said that a friend left a bag of clothes next to the table, hoping someone would take the clothes. She noticed the next day that all of the clothes were gone.

This instance sparked inspiration for Harris and prompted her to reach out to others in order to design and create a local community closet in, following the same actions as the table with clothes.

Harris and a few others began designing and constructing the closet last winter, despite the cold weather. The closet officially opened late December of last year and has been extremely successful since, according to Harris.

Harris visits and donates to the closet at least twice a week in order to multitask: clean out her own closet before college and also help others.

“I just want to provide others with what I have and help others who aren’t as fortunate in the community,” Harris said.

There have consistently been clothes in the closet ever since its opening, according to Harris. She also emphasized how much of a positive impact this project has had on others.

“You can always tell that it’s a big help in the community,” Harris said. “People needed it and really appreciated it.”

At the same time of the closet, Harris created the Involved Youth Activist Network in order to “have a safe place for Black activists here in town.” These activists educate themselves on activism and create projects, like the community closet.

“We need to leave what we can because some people just don’t have it,” Harris said. “The genuine love for helping people has made me so happy.”