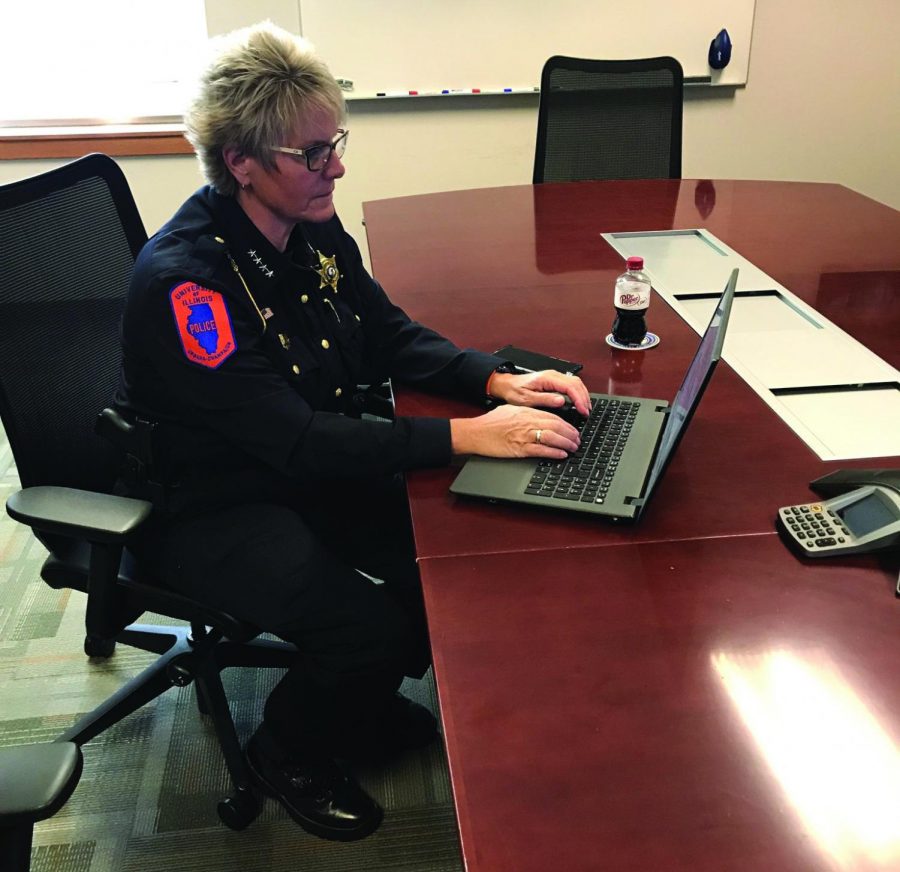 Photo Courtesy of The the University of Illinois Police Department

Police Chief Alice Cary of the University of Illinois Police Department responds to Reddit comments on her laptop. Cary answered questions from the University community to provide more transparency specifically about campus crime.

Police Chief Alice Cary of the University of Illinois Police Department took to Reddit Thursday to answer questions from the University community with a strong focus on the recent rise in crime.

Redditors asked Cary about what the department’s plans were regarding increased law enforcement presence on Green Street, citing concerns of rising violent crime in the area.

“I know you don’t cover the area, but how do you plan to stop the massive wave of violent crimes on green street from spilling over to campus?” a Redditor asked. “Every weekend there’s a new story about shootings or brutal beatings on green.”

Cary replied, saying that UIPD is currently involved in the installation of additional security cameras on Green Street, increased patrols in the area, and limiting after-hours access to certain parking lots that are prone to crime.

“We were seeing people congregating in some of those lots, and that’s when disputes were breaking out. We’ve seen a lot of success with these techniques since they’ve been in place,” Cary said.

Cary also mentioned that the local law enforcement has a role in patrolling. “Although we also patrol Green Street, it is officially the jurisdiction of the Champaign and Urbana police departments. They provide the primary patrol presence in that area, and the extra things we’re doing wouldn’t be possible without their collaboration.”

In addition, Cary stressed that these physical measures were only meant as short-term relief for the visible effects of crime, and not solutions to the larger causes of violent crime in general.

“When we successfully drive violent crime out of one area, it can pop up in another area,” Cary said. “There are some really big community and social issues we are grappling with right now across the nation, and it’s going to take more than just the police to figure these out.”

Cary noted that the recent issues, “may be partially tied to the increase in gun violence we’ve seen across the community” but are still relatively infrequent.

“I would caution against qualifying it as a ‘massive wave’ of violent crime on Green Street,” Cary said. “Any amount of crime needs to be taken seriously … but no community is ever going to be completely crime-free. This underscores the importance of people taking steps to look out for themselves.”

When asked about the recent hiring of social workers for the force, Chief Cary highlighted the addition of the Response, Evaluations, and Crisis Help (REACH) team.

“Since the beginning of 2021, we’ve hired a Crisis Outreach Coordinator and two Police Social Workers,” Cary said. “Our Social Workers ride in patrol cars with specially-trained police officers (who we call Behavioral Health Detectives, or BHDs) to respond to mental health-related emergencies.”

Throughout the AMA, Cary reiterated that keeping the CU area safe involves not just UIPD, but also the Champaign and Urbana police departments, and she expressed gratitude towards all three departments for cooperating to fight crime.

“We are the University Police Department, so our main focus is going to remain on doing everything we can to keep the campus area safe,” Cary said.