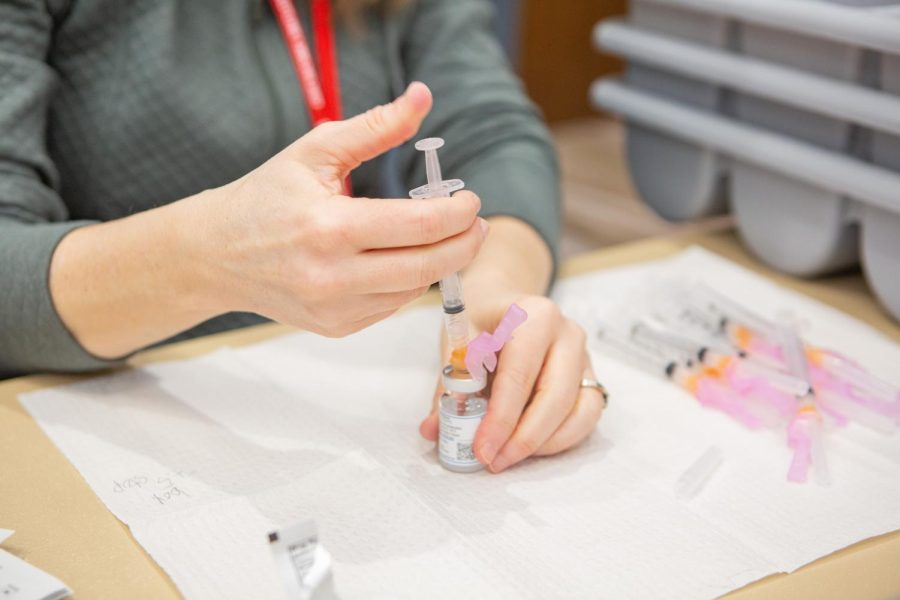 A woman fills a syringe with a Moderna Covid-19 vaccine on Feb. 11 at the I-Hotel. The University received 750 requests for Covid-19 exemptions because of religious reasons.

An estimated 750 requests for religious exemption from the COVID-19 vaccine mandate have been filed with the Office of the Dean of Students so far, according to Robin Kaler, vice chancellor for Public Affairs.

In order to obtain a COVID-19 religious vaccine exemption, students must “attest via a signed statement that a sincerely held religious belief, practice or observance conflicts with the immunization,” according to Kaler.

Mateuz Brak, junior in ACES, submitted his religious exemption form for the vaccine on Sept. 5. He was instructed to resubmit his form since he filled it out incorrectly and it is currently pending approval.

According to Kaler, University administration does “not require students to ‘prove’ their reason for a religious exemption.”

Brak is a part of an “off chute of Christianity that isn’t for certain testing and formation of vaccines and stem cells and all that.” However, he mentioned that people following many different religions have sought the exemption under “the guise” of the Christian offshoot named Church of Christ, Scientist.

“It isn’t uncommon, people just don’t want the jab and that’s it,” Brak said. “They’re just willing to say what it takes to be exempt.”

Students who have not gotten vaccinated must stay in compliance with COVID-19 testing guidelines and get tested every other day for undergraduate students and twice a week for graduate students.

If Brak misses a day of testing, he gets alerts in the form of text messages and emails saying he is not in compliance with COVID-19 testing guidelines and is susceptible to academic discipline.

Despite several warnings and threats, no official disciplinary action was taken against him in instances where he accidentally missed a day of COVID-19 testing.

“I think because I’ve submitted a form and I’m showing that I’m very interested in the form, then there’s more leeway in a sense,” Brak said.

Not every religious COVID-19 vaccine exemption request has been granted or rejected, but the Office of the Dean of Students says they are “being processed as quickly as possible.”