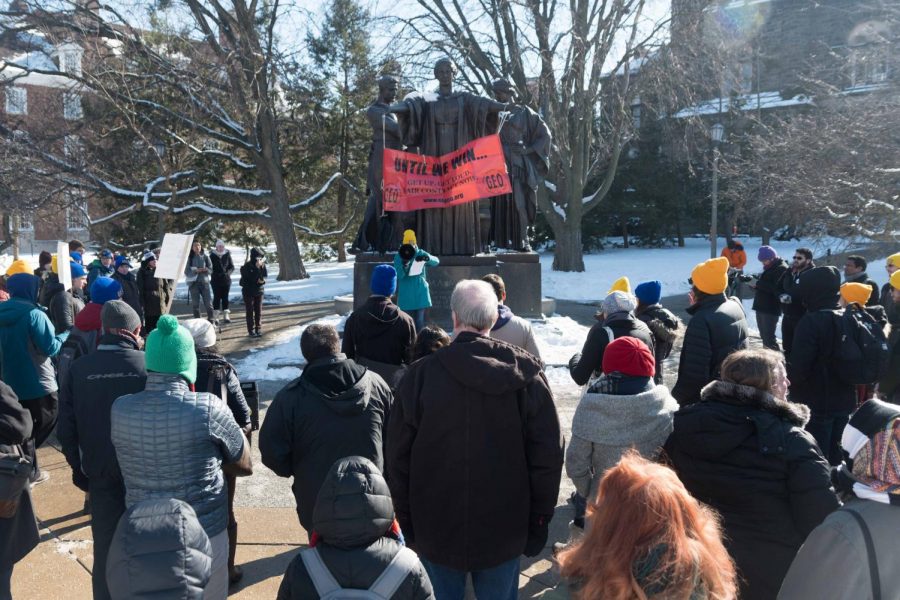 Graduate employees protest at the Alma Mater for a fair contract on Thursday, Jan. 18.

The Graduate Employees’ Organization rallied Thursday in front of Alma Mater to protest the University administration’s bargaining team’s failure to advance negotiations and the administration’s proposal of the Campus Wage Program.

Patrick Kimutis, member of the GEO bargaining team and graduate student in English, wrote in an email the Campus Wage Program would allow University administration to avoid bargaining wages with unions on campus and prevent employee salaries from increasing.

“Instead of deciding what our wages will be during bargaining, the Administration retains unilateral control to decide what they are each year,” Kimutis wrote. “Generally, union contracts spell out exactly what the wages for each year will be, but with Campus Wage, wages are left up in the air. We’d have to wait to hear what the Provost Office announces as the new wages increase or decrease for each year–generally, it’s 0 (percent).”

The GEO said a proposal of the University’s nature would violate Illinois labor law.

“The reason this is illegal is because the Illinois Education Labor Relations Act specifies that wages are a mandatory subject of bargaining,” Kimutis wrote. “Both sides HAVE to discuss wages at the table. By proposing Campus Wage, the (administration) is attempting to get out of that obligation.”

Since March 2017, the GEO and the administration have been involved in back-and-forth negotiations for a new contract, but there has been little progress on the topic of wages.

“Right now, the University and the GEO are holding a bargaining session, so right now they are in a room trying to figure out all the issues we want protected,” said Marilia Correa, graduate student in LAS and co-president of GEO. “We really want them to see this (protest) and that the community supports the GEO.”

Correa said negotiations between the GEO and the administration usually last eight hours and occur weekly.

“We’re here to tell (the University) today that if they don’t start seriously bargaining, we’re going to have to think about a strike,” said Andrew Bowman, graduate student in English.

Bowman said though negotiations had been going on for several months, the GEO has been without a contract for 150 days and the administration has been reluctant to meet their demands.

Many undergraduate students, faculty and community members attended the rally to show support for the GEO.

Nima Homami, senior in ACES, said he attended the rally because everyone deserves a living wage.

“The TAs’ teaching conditions are my learning conditions,” Homami said. “It’s important that undergraduate students stand in solidarity with our graduate peers.”

The current minimum wage of graduate employees is $16,360 which does not cover the University’s published cost of living at $22,314, according to a press release.

In addition to a livable wage, the GEO is also fighting for increased healthcare contributions and parental leave.