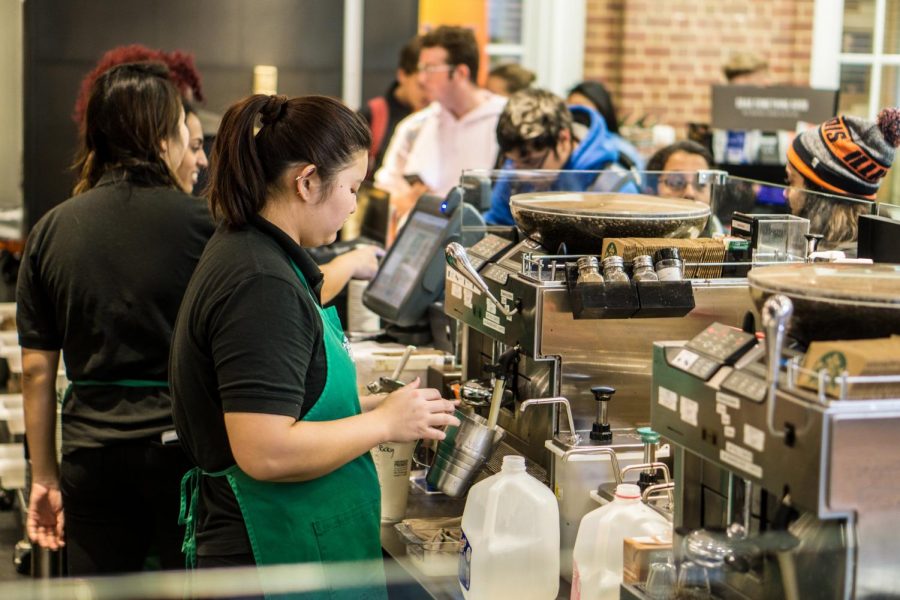 Drew Hong, sophomore in LAS, uses a milk pitcher to make a drink at the Illini Union Courtyard Cafe on Monday. The company’s removal of milk pitcher labels has the public worried about cross-contamination.

Starbucks began enforcing a policy change in early July that removes labels from milk pitchers behind the counter, raising concerns about cross-contamination in its drinks.

The unannounced policy change was brought into the public spotlight on July 10 when a Washington Starbucks barista, Coralee Snow, alerted customers with dietary restrictions and food allergies through a Facebook post.

“The removal of the sticker was consistent with, and further emphasizes, our stores’ use of shared equipment throughout our store,” said a Starbucks spokesperson in an email.

Starbucks’ past allergen-friendly stance has been removed from its website since the announcement of the policy change, said Drew Hong, sophomore in LAS and Illini Union Starbucks barista.

However, Hong does not believe the newly enforced policy drastically changes the safety of Starbucks beverages.

Even prior to the no-label policy, equipment could not be ensured to be allergen-friendly, Hong said. Though milk pitchers were labeled for specific liquids, Hong has seen baristas forget and grab the wrong pitcher throughout her time working at Starbucks.

“If you don’t specify that you have an allergy, we might forget or it will go to the back of our minds,” Hong said.

Equipment cleaning is an element that also raises concerns of cross-contamination and sanitation. After each use, the pitchers are steamed with the only present steam wand attached to the store’s espresso machine. Then, pitchers are wiped with a sanitizing towel that sits in a bath of a chlorine-based sanitation solution, which is changed every hour.

Starbucks applied the new policy to establish a transparent relationship with its customers, according to the email. Starbucks advises customers to communicate with their barista about concerns but said there is no guarantee of an allergen-free beverage due to shared equipment being used throughout the store.

“Now if someone has a specific allergy, we’ll take one of our pitchers to the back and sanitize it with hot water and sanitizing solution,” Hong said.

Krti Tallam, senior in ACES and president of University Vegetarians, has experienced a rise in concerns with her orders at Starbucks as a vegan.

Starbucks’ emphasis on equipment shared between different ingredients has been a known concept to baristas like Hong who work behind the counter, yet the international coffee franchise has not officially announced its policy change to customers.

Meggie Gaddy, junior in ACES, was unaware of the policy change until recently. As a vegan, Gaddy is worried the policy will increase the likelihood of receiving a beverage mixed with the wrong milk.

“By removing labeling they’re saying, ‘hey, this is what happens, we’re owning up to it instead of enforcing it,’” Gaddy said.

If cross-contamination concerns reach the point of continuously having to look over the counter to watch baristas mix her drink, Gaddy said having to worry about the safety of her beverage would not be worth it.

“In anything, if my concern gets that bad, I just honestly won’t shop,” Gaddy said. “I just won’t buy their products anymore.”

Eric Zarnesky, Urbana resident and social outreach chair of University Vegetarians, sees Starbucks’ effort of becoming transparent as a positive element but does not look favorably upon the policy as a whole.

“The fact that they’re being open, I think it is really a wonderful sign,” Zarnesky said. “Who doesn’t want to know what the person on the other side of the counter is doing and why?”

Zarnesky is confused, however, as to why Starbucks has become open about its misuse of labeled containers rather than acting to resolve a critical problem to consumers with specific dietary restrictions.

“I can’t imagine, I mean, there are people who avoid dairy products for religious or spiritual reasons or reasons that are deeper than just dietary and this really alienates image,” Zarnesky said. “It doesn’t seem like a wise decision.”