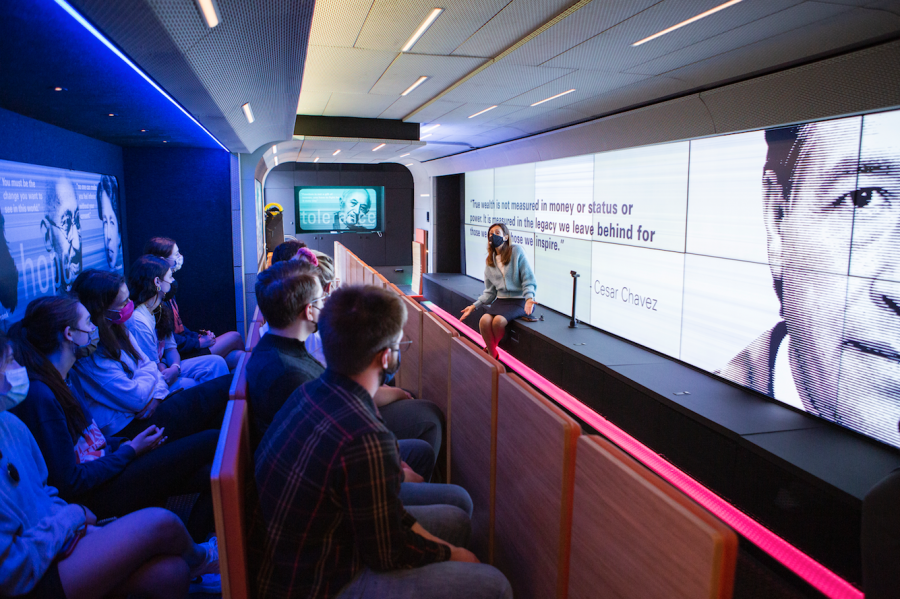 Students from the Sigma Delta Tau social sorority and members of student government listen to speakers on the Mobile Museum of Tolerance at the Illini Hillel on Monday afternoon. The bus hosts interactive workshops to raise voices against intolerance, anti-Semitism, bullying, racism and hate.

Hillel at the University partnered with Organic Oneness to bring the Mobile Museum of Tolerance on campus, a large bus that people can enter for interactive workshops centering on tolerance, awareness and understanding.
The mobile museum held six workshops for students and was parked outside the Illini Hillel on Monday.
According to a press release, the goal of the Mobile Museum of Tolerance is to encourage and empower people to raise their voices against intolerance, anti-Semitism, bullying, racism and hate — irrespective of their background.
“The main goal is to help students understand that building bridges is the most important thing we can be doing,” said Alison Pure-Slovin, director of the Midwest region for the Simon Wiesenthal Center.
Pure-Slovin said the mobile museum is in its third month and that the University is the first college they have visited.
The University was picked as the first college because of an increase in anti-Semitic incidents on campus, Pure-Slovin said.
The exterior of the bus features the faces of historical figures such as Martin Luther King Jr. and Anne Frank.
Inside the bus, there were screens and seating for students to learn about tolerance and history, according to their website.
Films are shown across their multiple screens that discuss the history of events such as the Holocaust and the Civil Rights Movement. Pure-Slovin said they use history to have conversations about today’s social issues.
“The Museum serves as a unique opportunity for students from all backgrounds to come together and learn about each other’s needs and challenges,” said Erez Cohen, executive director of Hillel, in a press release.
“We are excited for the opportunity to foster real dialogue between student groups,” Cohen said.
It is the latest educational initiative by the Simon Wiesenthal Center, a Jewish global human rights organization based in Chicago. It is the first of its kind in the United States, according to a press release.
“Having the museum on campus is a great way of promoting understanding, truth of history, justice, and unity on campus,” said Yogev Ben-Yitschak, representative of Organic Oneness, in a press release. “This is exactly what Organic Oneness stands for.”
Due to social distancing, the bus held groups of 12 students at a time and was active from 10 a.m. to 5 p.m. on Monday. Roughly 60 students participated in workshops throughout the day, Cohen said.
Cohen said that there were existing issues on campus which need to be addressed. The goal of the program was to have open and honest dialogue amongst people with different backgrounds, he said.
“The feedback that we got from students was extremely strong as many said that they had never had a full conversation on these topics,” Cohen said.
Pure-Slovin said she thinks students welcomed the experience and enjoyed having a facilitated conversation.
“After the students participated, I hope they went back and continued the conversation,” Pure-Slovin said. “We’re just a vehicle to help the campus have a conversation. It’s what you do moving forward.”

Editor’s note: A previous version of the article stated that the Mobile Museum of Tolerance is in its third year. However, it is in its third month. The Daily Illini regrets this error.