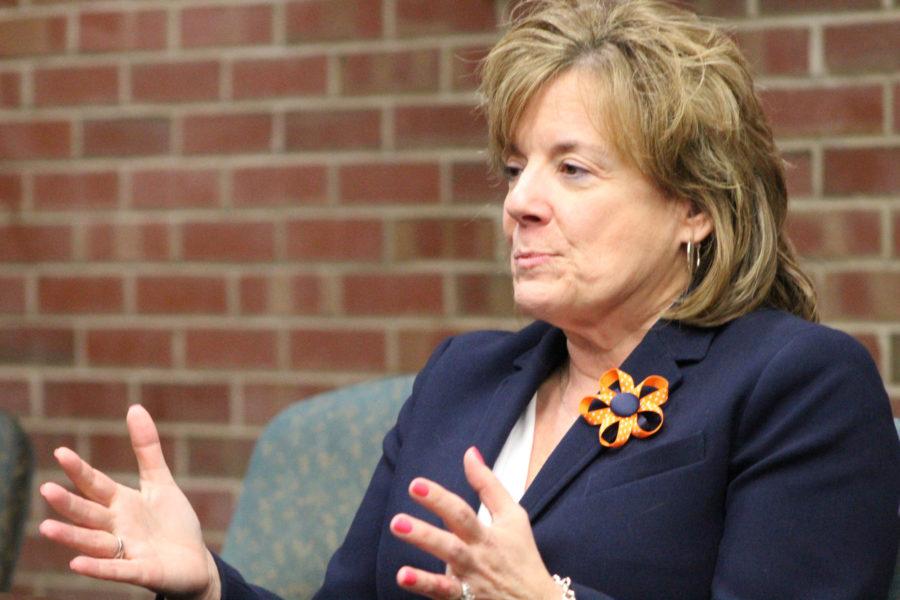 Interim Chancellor Barbara Wilson speaks with The Daily Illini’s Editorial Board on Jan. 14 at the University of Illinois-Chicago campus. Wilson discussed the University’s search for a new athletic director, among many other University-related matters.

By The Daily Illini Editorial Board
January 25, 2016

In December 2015, Interim Chancellor Barbara Wilson said she hoped to conclude the hiring of a new athletic director by the Jan. 21 Board of Trustees meeting in Chicago. With that date having passed and no news from the University regarding the issue, some fans have begun voicing their distaste for the length of the process.

Former Athletic Director Mike Thomas was let go on Nov. 9, and the search began immediately for a replacement. With the future of football head coach Bill Cubit in the balance as the season came to a close, it was believed the University would decide on a new AD quickly to play a part in the decision-making process. However, two months passed with no news on that front and the interim leadership at the University elected to award Cubit a two-year contract extension.

With Cubit’s extension a distant speck in the rearview mirror, it no longer matters when Wilson and her search committee are able to find their man or woman for the job — all that matters now is that they get this hire right. In an exclusive meeting with The Daily Illini Editorial Board, Wilson said she was spending quite a bit of time consulting with various groups about their expectations for the new athletic director.

“I’ve talked to coaches, student-athletes, to alums to people in DIA, the staff in DIA,” Wilson said. “We’ve created a pretty robust list of criteria, the wish list of who’s going to be the next leader.”

The choice to lengthen the search process into the new year has been met with frustration from impatient fans hoping for a quick end to the void of permanent University leadership. Fans shouldn’t be worried about the timing of this search any longer — the next major decision in the athletic department will likely occur at the end of the 2016 basketball season, when a potential contract extension for head coach John Groce will be debated.

By that time, there will almost certainly be a new AD in place to satiate the fans’ desire for a fresh start. The only remaining question is whom that person will be, and whether there is a worthy candidate to fill Wilson’s extensive criteria.

“One of the coaches said, ‘You’re looking for somebody who walks on water,’” Wilson said. “And I said, ‘No, I’m just looking for a great leader.’ And I know that person’s out there, and that’s who we’re going to find.”