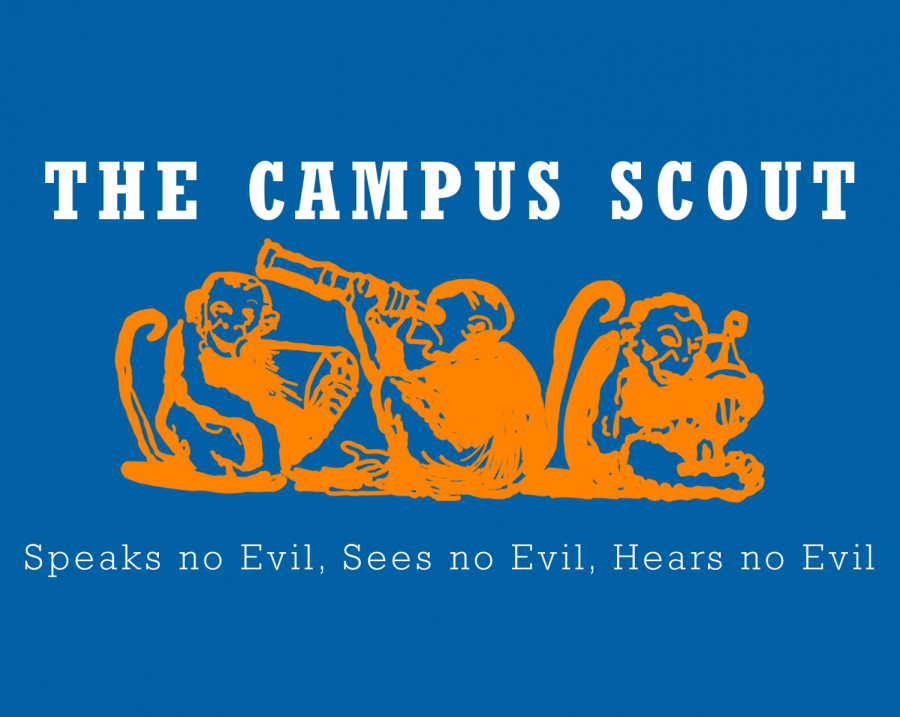 Beneath the interconnected tunnels of campus and through the shattered Armory windows, Scout rises.
Ascending above the weathered — or possibly coffee-stained — sidewalks of C-U, but not eclipsing the frugally manufactured apartments as that would be a lease violation, Scout returns from his somber slumber since 2004. Immediately upon returning, Scout is satisfied to see things haven’t changed too much.
Despite his antiquated age — 110 this fall, by golly — Scout is presently relieved to see a fellow Lost Generationer occupy 1600 Pennsylvania Avenue.
Similarly, Scout’s pleasantly surprised, if anything, to see that matters at the national level were also disoriented beneath the campus tunnels these last 17 years. From the continued occupation in the Middle East to a stooge stumbling across the White House, Scout’s comforted that the players may change, but the game remains the same.
However, Scout’s utterly astounded by the societal camaraderie that reacts to the police violence’s onslaught: especially how everyone united for Eric Garner. Especially how everyone united for Michael Brown. Especially how everyone united for Tamir Rice. Especially how everyone united for Breonna Taylor. Especially how everyone united for George Floyd…
And now Daunte Wright? Another innocent life was taken by the police? Good thing the C-U police aren’t like the rest. Right … ?
Well since ‘04, surely more people recognize this targeted violence and banded together? Even Scout understands the simple yet effective universality of Black lives mattering.
Wait — this just in folks … Scout’s sources reveal that, like all things pre/post-2004, incompetent whites strike again.
Whether formulating a redundant intervention to build “peace in the Middle East” — by way of tortuous tanks and “shock and awe” — or policing American streets, life beneath the crude is dreadful.
Still, since Scout’s homecoming, hope prevails. Scout’s astounded by the campus’ vibrancy and breadth of life even amidst a pandemic. Meandering around the Six Pack, Scout couldn’t help but admire the luscious tree buds awaiting winter’s retreat. Additionally, Scout felt immense dignity when picking up tossed ketchup packets etched into the concrete.
Although no one was there to congratulate Scout, he’s fully aware that Mrs. Scout’s smiling down from her pricey — yet worth it for the view and “granite” countertops — apartment.
Life is busy, and it requires a reliable, independent investigator to scour for the truth. Whichever rabbit hole or tunnel beneath campus it leads — that may or may not make Scout vanish for a decade or two — Campus Scout is on the hunt.
With the help of trusted sources, Scout looks forward to once again bringing the University’s triumphs and tribulations to the people: cool, calm and collected. The search continues.

Friend of Scout? Submit tips of any kind to:
[email protected]