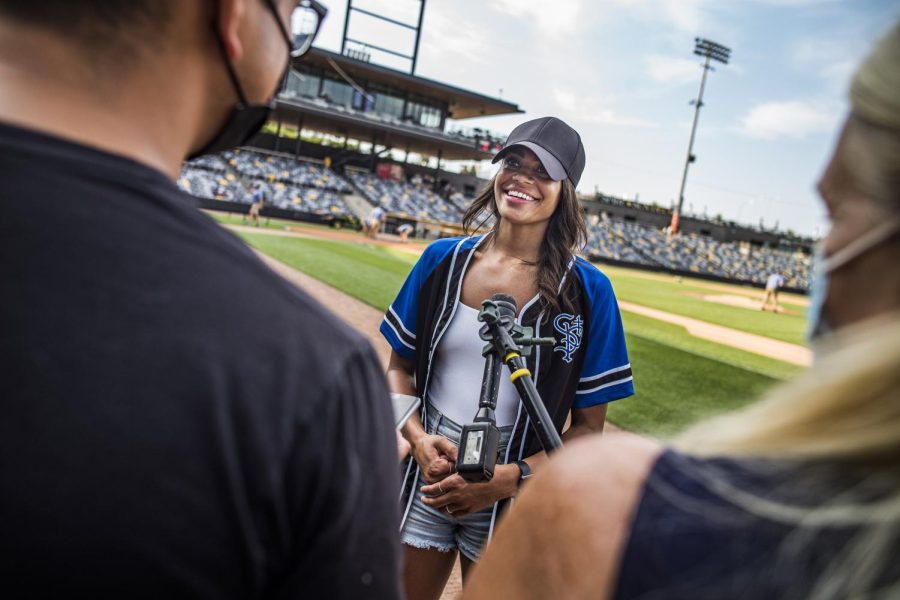 “The Bachelorette’s” Michelle Young was the star attraction at CHS Field for the St. Paul Saints Triple-A baseball game on July 1, 2021, in St. Paul, Minnesota. Columnist Rayna believes that the “Bachelorette” shouldn’t be making ghosting the norm.

As I joined my roommates to watch “The Bachelorette” for the first time, I was surprised to see how different our feelings were about the contestant Joe Coleman, a 28-year-old real estate developer from Minnesota.

During his first meeting with the bachelorette Michelle Young, it was revealed that the two had previously exchanged a few direct messages before he promptly ghosted or cut communication without explanation. While I sympathized with Coleman, my roommates saw his behavior as an immediate red flag.

Even before the pandemic, the social pressures related to texting were mounting. One paper from a 2018 Google conference found that in texting etiquette, the typically acceptable time frame for a response ranged from a mere 20 minutes to 24 hours. The obligation to text back almost immediately leads to the feeling that we always need to be “on” and that a response is now or never.

More recently, the pandemic has brought about drastic changes in digital communication. A study from the consulting firm Kantar observed the increase in usage across several messaging platforms was most concentrated in the 18-to-34-year-old age group. This increase included a 41% jump in usage of the messaging app WhatsApp due to the COVID-19 pandemic.

The expectation that the communication happens in near-simultaneity, in real-time, only adds to the difficulty of staying in touch online. Failing to respond right away can give us a “sense of having fallen behind and broken a major rule of online communications,” said Elias Aboujaoude, a psychiatrist at Stanford University who specializes in the intersection of technology and psychology.

Given the sheer number of text messages we receive, it’s easy to feel burnt out and overwhelmed. The only options seem to reply immediately or not at all.

When the bachelorette confronted Coleman about ghosting her, his rationale for abruptly halting their message exchange really resonated with me. Ghosting can be hurtful and is often viewed as avoiding communication and taking the easy way out. However, Coleman’s response was still valid.

During the time that they were messaging, he was facing several difficult situations.

“I had a property in George Floyd Square, like three blocks away, and I had a lot of shootings, a lot of murders, a lot of things going on where at the time, it just caused a lot of anxiety,” Coleman said. I didn’t feel like I was in a place to open up to somebody, and I didn’t know how to express those feelings with you.”

The expectation for texting is often that it is instantaneous and consistent. However, this fails to account for the anxiety and emotional toll that texting can cause, especially amid a global pandemic.

In my own experience, ghosting is not always the insensitive and malicious act that people make it out to be. Although messages with time-sensitive content are easy for me to respond to, sometimes I am not in the headspace to reply to a message the instant I receive it. In the following hours and days, I try to formulate the perfect response. By the time I have it, the socially acceptable time to respond has passed, and I end up failing to send the message at all.

Author Jon Acuff’s tweet captures my sentiments perfectly: “Is there an emoji for, ‘I saw your text but didn’t know how to perfectly respond to it so I waited until I knew exactly what to say but it’s been three weeks so now I just feel microbursts of shame every time I see your name in the elephant graveyard of messages on my phone?’”

For the people in my life, to communicate better, I try to preemptively alert them that I have trouble with texting sometimes. My lack of response 99% of the time is not me intentionally ignoring anybody but rather being overwhelmed by the seemingly simple task of responding.

Ghosting should not be made the norm, and we do have the responsibility to openly and honestly communicate with others. However, it is also important to be more sympathetic and understanding of those that find themselves too overwhelmed to follow standard texting conventions.

Rayna is a sophomore in LAS.