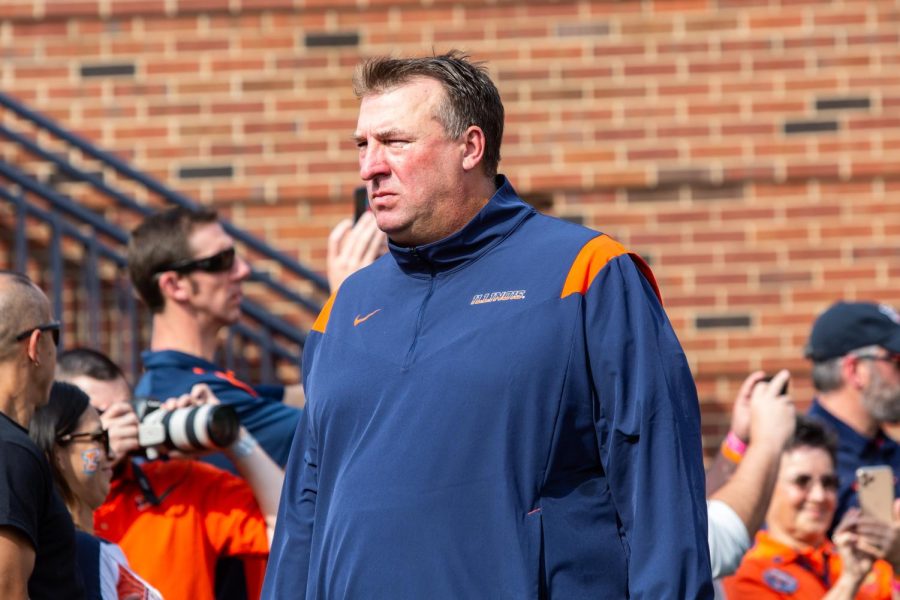 Head football coach Bret Bielema walks onto the football field before the homecoming game against Wisconsin Oct. 9 Columnist Talia Duffy argues that Bielema’s salary is too high for the underperforming team.

Illinois is a Big Ten school. We are regularly featured on ESPN, we compete against powerhouses like Ohio State and Michigan and our struggle to find a new mascot is highly publicized. Like all the other schools in this conference, we are just so football.

Unfortunately, we don’t have the team to match.

The University seems to be more than a little self-conscious about our team’s inferior reputation. However, paying football coach Bret Bielema $4.2 million a year — the highest salary of all University employees — isn’t going to save Illinois football. If anything, it makes us look like a joke.

His compensation is unhinged from reality. He ranks as the 31st highest-paid college football coach in the nation, but our team is nowhere close to being the 31st best — CBS Sports places us at 73rd. The University tries to make up for our poor performance with barely passable facades; they play a dramatic video at the beginning of every game — never mind that all the clips are old — upload obliviously triumphant posts to Instagram and, most prominently, throw ridiculous amounts of money at the flailing program.

Moreover, we’ve spent millions on shiny new football centers, amenities the players will never use and a new coach.

The University tries to assert itself as an equal, a major football force, but instead, we look like a young boy stretching his body upward on the playground in hopes to look tall enough to play with the big kids.

Some hopeful fans claim that because Bielema is fresh, he requires more time to acclimate to our program and establish a certain flow. But when — or more likely, if — that happens, are we going to improve enough to justify his monstrous paycheck?

It’s not even his fault our team is bad. It is no one’s fault. I accept it as an inevitable fact, as one of those givens you have before completing a geometry proof. So for now, we need to accept football as a lost cause and funnel our money to more profitable ventures.

Our basketball team, for example, is much more popular and poses more realistic opportunities for financial gain. The head basketball coach, Brad Underwood, is paid around $1 million less than Bielema. Beyond that, I have yet to bring up how inflated both men’s salaries look next to those of the professors, which rarely crack $100,000.

The impact professors make on the student body is undoubtedly greater than anything Bielema will ever do. College education should be valued far above athletics.

Why do we bow to the toxic American obsession with football? Why is it an indicator of a school’s worth? Why must we push our other values in an attempt to patch up our reputation?

Illinois, it’s OK if we’re bad at football. It really is.

Talia is a freshman in Media.