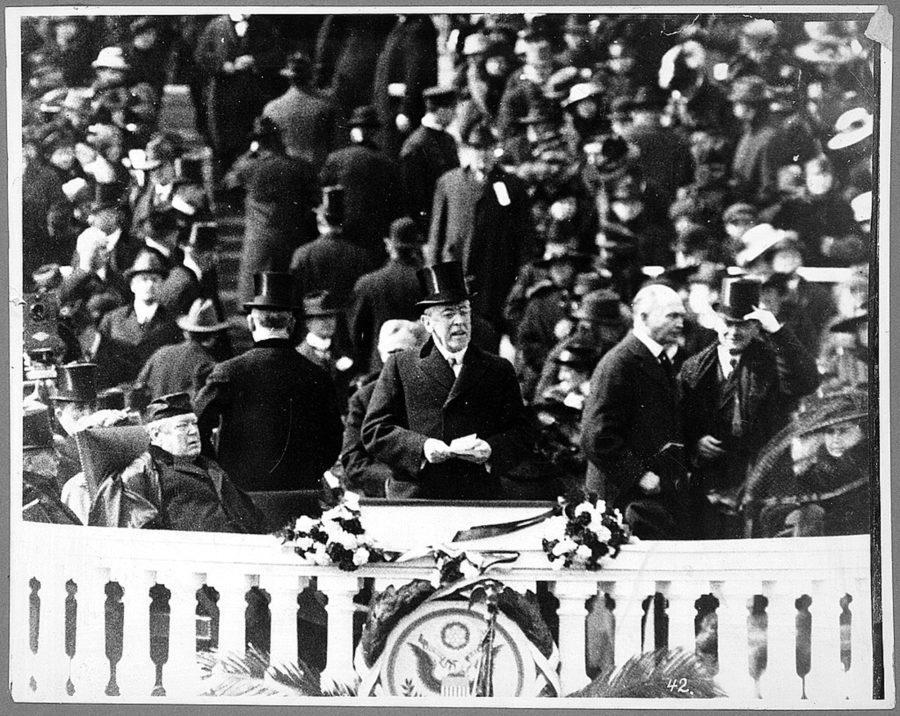 President Woodrow Wilson, with top hat and speech in hand, delivers his second inaugural address at the U.S. Capitorl in Washington, D.C., March 5, 1917. (Library of Congress/MCT)

The legacy of President Woodrow Wilson is under siege at Princeton University. Protesters from the Black Justice League, a student group at Princeton, staged a 32-hour sit-in to demonstrate their frustration with the legacy of Wilson because of his alleged racist past.

The protesters demanded that the university rename buildings named after Wilson and remove a mural of Wilson from the dining hall, among other demands.

The university is now considering a possible name change despite his alumnus status and his prior service as university president.

The protesters raise valid questions about Wilson’s legacy, but scrubbing Wilson from places of honor would be misguided. Wilson’s name should stay.

It is important to realize that the Black Justice League is partially justified in their grievances because Woodrow Wilson was racist.

Wilson, born and raised in the south before the occurrence of the Civil War and influenced by the subsequent Reconstruction Era, manifested many of the prejudices of his time and place.

This is seen in his sympathy for the Confederacy, his complacency in the re-segregation of federal agencies and his private screening of Birth of a Nation at the White House, a movie glorifying the Ku Klux Klan.

However, if we are going to judge Wilson, focusing solely on his prejudices does not give a full picture of our 28th President.

In most regards, Wilson was a progressive champion.

These progressive reforms shaped the course of American history and served as a building block for FDR’s New Deal and other transformative legislation.

Wilson, by his foreign policy, also shaped the course of world history. By asking for a timely declaration of war against Germany, Wilson insured an Allied victory in World War I.

Moreover, in negotiating the peace settlement with Germany, Wilson was instrumental in the creation of the League of Nations, a precursor to the United Nations, in order to arbitrate disputes and avoid wars.

For his role in foreign affairs, Wilson was awarded the Nobel Peace Prize.

Although we cannot turn a blind eye towards Wilson’s racism, as has been done in the past, we also should not lose sight of his positive accomplishments and transformative effect on history. Students should demand a more holistic view of Woodrow Wilson on their campus rather than expulsion.

To do otherwise would be a disservice to their educational experience.

Quite simply, how can one learn from history if we erase teachable moments?

Perhaps a prominent plaque describing both the positive and the regrettable moments of Wilson’s life could achieve that goal.

To that point, it is often easier to find a convenient scapegoat rather than accept that a person was a manifestation of a larger problem.

Keeping Wilson’s name, accompanied by the plaque, would prevent Princeton from distancing itself from less desirable moments in their history.

Further, if Woodrow Wilson is not safe from banishment, who is? Although it is relatively easy to rename halls and buildings named after controversial figures, what about entire universities?

Would we also need to change the name of our nation’s capital? What about the state of Washington?

A line has to be drawn, and I would draw it in favor of Wilson.

It is unwise to judge historical figures by our present standards of acceptability.

That does not mean our ancestors were correct, but it is simply a realization that many, if not most of us, are victims of the zeitgeist of our time and place.

As a recent example, Hillary Clinton initially opposed gay marriage. Opposition to gay marriage is now seen by many as homophobic. Should she be retroactively viewed as homophobic based on this current standard or should the time and place of her views be relevant?

Although Wilson’s legacy needs to be examined holistically, it would be misguided for Princeton to purge Wilson.

We need to learn from history, not whitewash it. We must also draw a line on what names to keep and avoid the hubris of presentism.

These same principles apply equally to our university, and the nation as a whole, as we move forward in these times of great change. Thus, the name should stay.

Ryan is a University law student.