Why Bernie is bae 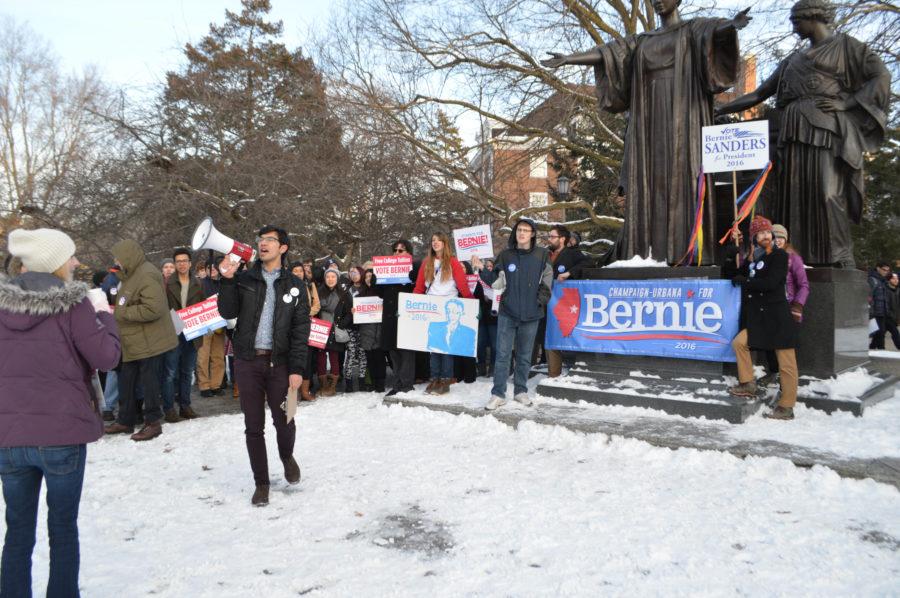 Brandon Hudspeth, a senior in political science, leads a group of Sanders supporters in a variety of chants in front of the Alma Mater as part of the March for Bernie on Jan. 23 2016.

It is apparent that our fellow students are “Feeling the Bern” and are backing Bernie Sanders for President. For proof, one need look no further than the multiple Bernie bumper stickers scattered across campus or your Facebook news feed, which is bursting with Bernie statuses.

This local phenomenon is largely proven out by national polls showing that young people are backing Bernie more than any other candidate. However, this high level of support for Bernie amongst Millennials should be a warning sign for the conservative movement. If the GOP doesn’t find a way to connect their policies and ideologies with young voters like Bernie has, the future of the party could be in jeopardy.

Some believe Bernie is so popular among the youth because young people, who are predisposed to vote Democratic, are really just rejecting Hillary Clinton. Thus, according to this view, Bernie’s strength is really Hillary’s weakness.

Proponents of this view would cite Hillary’s current email scandal where she used her personal, unsecured email account for official communications as Secretary of State. Such proponents also acknowledge questions over her handling of the attacks on the U.S. Consulate in Benghazi, sources of funding and possible conflicts of interests for the Clinton Foundation, and Hillary’s role in covering up her husband’s affairs.

Further, such proponents cite Hillary’s recent inconsistencies on key issues like the Keystone XL Pipeline or Trans-Pacific Partnership. Lastly, they note that Hillary Clinton, as compared to Barack Obama or Bill Clinton, lacks the political skill to connect with young voters in a genuine way.

While concerns about Hillary’s persona have some validity, I believe the more accurate explanation for Bernie’s influence amongst Millennials lies in his socialist ideology: Young people are becoming more attracted to socialism.

As a result, they find the positions of Sanders, who is a self-proclaimed socialist, to be most attractive and they consequently support him. Subscribing to this explanation, Sanders connects better with Millennials because of his ideologies rather than because of Hillary’s personal flaws.

The reasons for these shifting views on socialism are numerous. For one, many Millennials came of age during the recession and, as a result of high levels of student debt and difficulty finding stable employment, began to view capitalism negatively.

Second, while many in the prior generation associated socialism with the Soviet Union, most young people today associate socialism with Scandinavian countries like Sweden or Norway. These young people view entitlements such as universal healthcare and tuition-free college, which are available in Scandinavian countries, as something to be emulated.

This trend towards socialism should be concerning to republican presidential candidates and GOP leaders because, although people generally become more conservative as they age, this trend represents a serious viability issue to the republican party as we know it.

Thus, conservatives need to increase their effort to reach out to young people and explain the benefits of capitalism and the pitfalls of socialism. This can be done in part by stressing the negative aspects of unpopular government programs, demonstrating the benefits of the free market and finding solutions to problems affecting students.

Although Bernie may soon fall prey to Clinton, he represents a movement and an ideology that is a broader threat to conservative free market principles. The GOP must take CCnotice.