Editorial: University shooting reminds students to think before they tweet 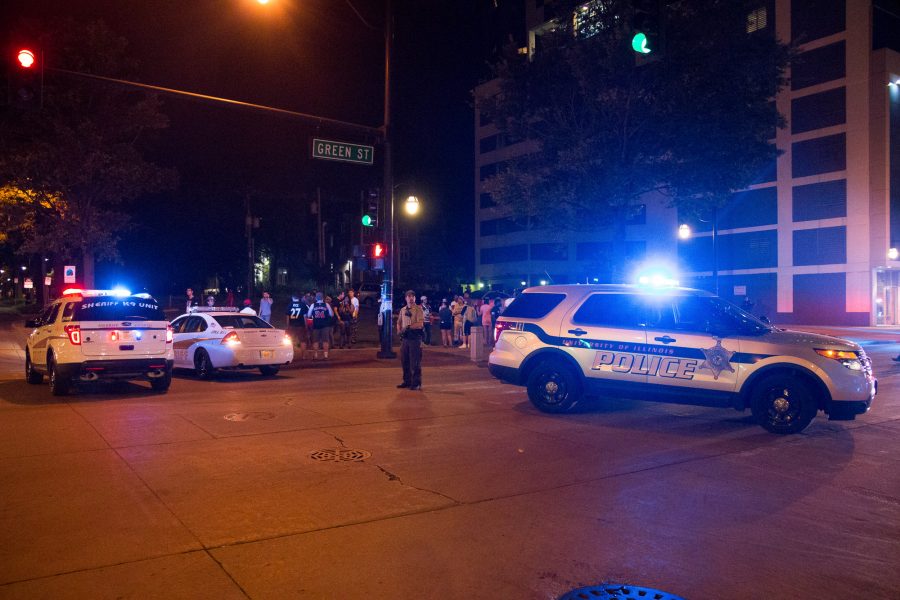 Police cars are parked at the intersection of Green and Fourth Street after a shooting that took place early Sunday morning.

By The Daily Illini Editorial Board
September 27, 2016

“There have been shots fired between Third St and Fourth St on Green St in Champaign. Avoid area. More information to come.”

Those frightening words represented the first notice many students received on Sunday morning’s shooting in Champaign. The message came at 12:51 a.m., about 15 minutes after the shooting occurred.

Some students had already walked by the popular intersection at Third and Green, which houses The Red Lion and Wingin’ Out, before they checked their phones for the news. Others never saw the alerts because they’d never connected their cell phones to the Illini-Alert system and failed to open their email inboxes.

The result of this uneven distribution of information, to no fault of the University of Illinois Police Department, was a crowd of students surrounding the very crime scene they’d been ordered to avoid.

Soon, rumors began to spread like wildfire. Some claimed it was an act of terrorism, or that racial tension was the cause. Others said anywhere between six and nine people were shot, with a minimum of two deaths.

When there is little information provided, people panic and assume the worst has occurred. Mix in panic with many frantic eyewitness accounts — which increasingly exaggerate events as the news reaches each new recipient like a game of Telephone — and you have a recipe for widespread misinformation.

The first thing most students did was check their social media, and all those juicy rumors were just waiting to be circulated. Retweets and likes abound when tragedy strikes. As sad as it may be, they seem like motivation for many of those sharing tall tales.

These rumors put the police in a difficult predicament. If students don’t see the Illini-Alerts, for any reason, then rumors begin to dominate the conversation both online and off.

What makes matters worse is the police’s necessity to confirm their updates well before sending them. By the time the second Illini-Alert, which declared that the shooter had fled the scene, was sent at 1:22 a.m., Facebook, Twitter and Reddit users had already “dissected” every aspect of the situation.

Social media can undoubtedly be useful for staying informed during a crisis. But it’s more than worthwhile to wait for a confirmed story or statistic before treating it as gospel.

A stray tweet that says nine people were shot creates excessive public unrest when the situation calls for patience and understanding. It scares the student who lives two blocks away from the incident. It terrifies the parents waiting helplessly across the world.

Retweets and likes are not worth the price of false information and panic.