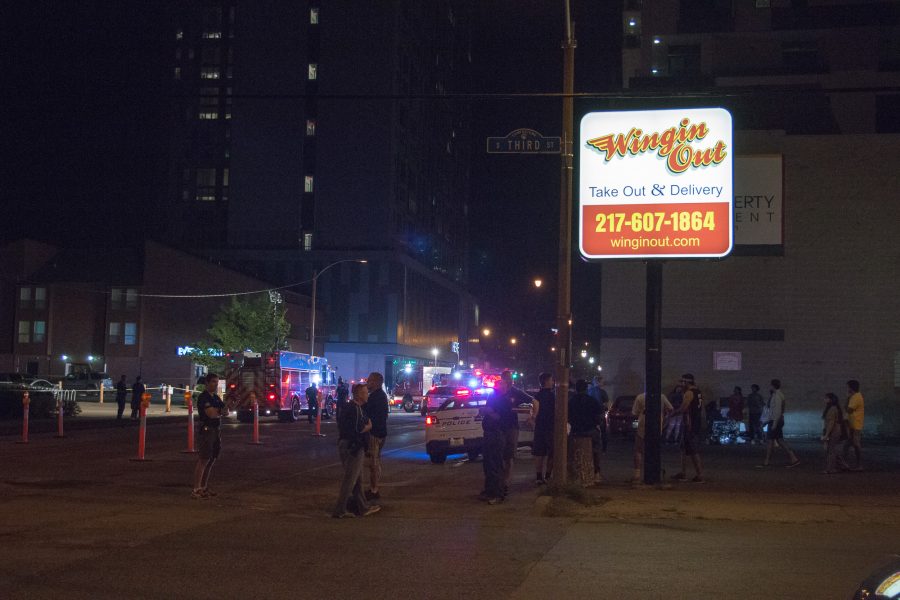 Police cars and an ambulance gather at the intersection of Green and Fourth Street after a shooting that took place early Sunday morning.

By The Daily Illini Editorial Board
September 29, 2016

The random nature of so many shootings, including the senseless violence that resulted in the death of 22-year-old George Korchev on Sunday, should serve as a reminder of the fragile expectation upon which our society relies: Guns are readily available for nearly anyone, and our lives depend in part on when and where gun owners decide to pull the trigger.

“The only reason this happened is people are too stupid and weak to handle their conflicts without firearms,” said Robbie Shepard, a friend of Korchev and recently graduated University student who was shot in his right arm during the incident.

The prevailing takeaway from students who have closely followed updates on the shooting has been one of hopeless resignation: It could have been any of us.

Shooting suspect Robbie Patton was just over two weeks removed from being given parole for a shooting incident in December 2015, which resulted in an eight-year prison sentence.

Within just those two weeks, Patton somehow procured another firearm illegally, which he eventually used for the shooting.

It ultimately doesn’t matter whether the gun was originally acquired through legal or illegal means — it was easy to find and easy to use. That’s the price our society pays for stubbornly staying true to the outdated Second Amendment.

At this point, we’ve seen that neither statistics nor logic will persuade gun users to forfeit their weapons. When 20 children and six faculty members were murdered at Sandy Hook Elementary School in 2012 and no significant changes were made, the near future of the country was effectively sealed.

That incident spawned an oft-repeated phrase: If the senseless murder of children doesn’t lead to gun control, then nothing will. Three more people were injured in a school shooting in South Carolina on Wednesday. The shooter also shot and killed his father beforehand.

The cycle will not stop on its own.

But there is hope, and it lies within the minds and hearts of the millennials who will eventually take over America’s legislative system. These incidents of careless gun violence, however big or small they may be, will continue to spin an ever-growing web of gun control activists.

To the NRA and other weapon enthusiasts, the shooting in Champaign hardly represents a blip on the radar.

They have never cared and in every conceivable future, they will continue to not care. The death of one and the effects on dozens more means little to them.

Students must move on at some point as well. Living in fear of a shooting is no way to live, particularly after an isolated, rare incident like Sunday’s shooting.

But remember the sheer terror of the moment you heard about the five bullets that rang through the air in the center of our campus lives that morning.

Remember how it felt to frantically confirm your best friend’s safety or tell your parents that it wasn’t you, not this time.

Remember those feelings when Election Day comes in November and remember them years from now when you have even more power to make a real change in the world.

Remember all of the horrifying stories and images from that night, and then remember this: It all started with a single gun.