‘School choice’ is only a temporary solution 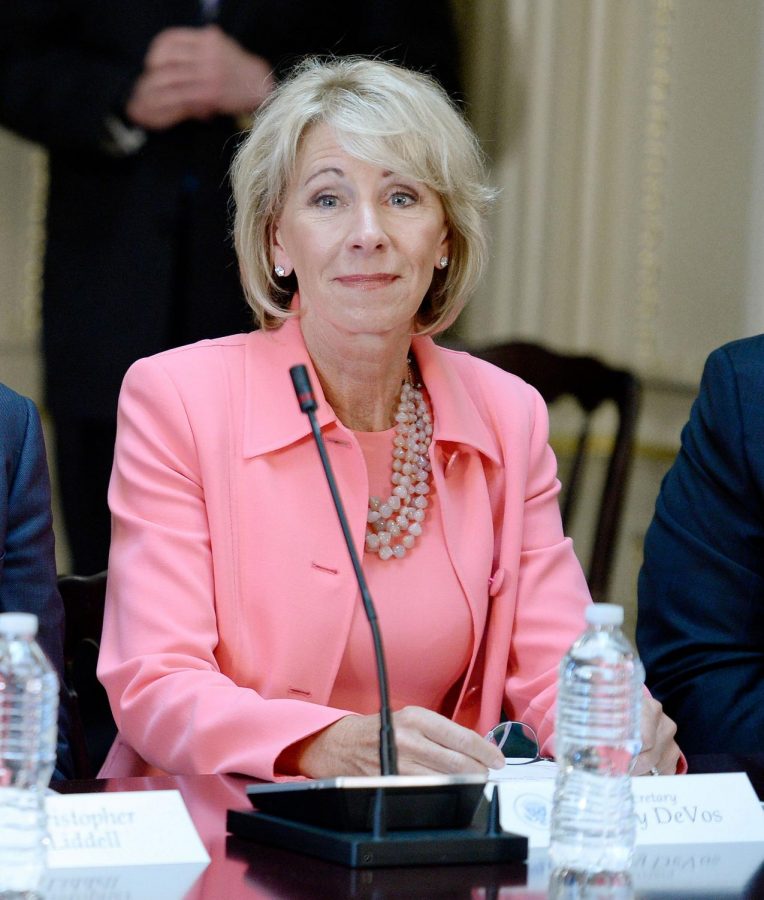 Education Sec. Betsy DeVos listens as U.S. President Donald Trump speaks during a strategic and policy discussion with CEOs in the State Department Library in the Eisenhower Executive Office Building on April 11, 2017, in Washington, D.C.

The Republican tax bill that was passed last week gave large tax breaks to the top 1 percent while giving smaller breaks for many of those in the working and lower class.

One portion of this controversial bill pushed the idea of “school choice.” Previously, money in a 529 education savings account was strictly allowed for college expenses only. A provision in the GOP tax bill changed this restriction to allow parents to use up to $10,000 per year to pay for K-12 education.

Betsy DeVos, the current Secretary of Education, pushed for this idea to expand private and charter K-12 schools to allow parents to have greater access to these other options other than the neighborhood schools. The “choice movement” is not a newly introduced concept, and has been gaining momentum over the past 15 years. DeVos had been a major advocate for school choice in her home state of Michigan.

School choice advocates argue that choice is an effort to allow for low-income families to turn to alternative options from public schools that may be failing in providing quality education to its students. In addition, advocates also state that public schools have reached a “dead end” and it is useless to try to reform or revive them.

However, the decision to privatize education isn’t as simple as reaching out a hand to allow for expanded opportunities for low income students. Voucher programs, which designate public funds toward a student’s private education, rarely cover the full tuition, especially with pricier expenses of private and charter schools. This would make it difficult for low income families to afford a private education, escalating the issue of access.

Not only this, but privatizing education means that these schools can choose whether or not to accept applicant students. Some private schools with religious affiliations may potentially be allowed to accept or reject applicants based on previous grades, behavior, existence of a disability, religion or sexual orientation.

There is also little and mixed evidence for the claim that quality of privatized education is “better” than public schools. In fact, according to a 2009 study by Stanford University in 16 states, the national pooled analysis revealed that “on the whole, a slightly negative picture of average charter school performance nationwide.”

Not only this, but focusing on private education to “solve” the issue of access of quality education ultimately misses the mark in getting to the core root of the problem: poverty. Poor districts have less funding for school systems, which are unable to employ experienced teachers, provide new textbooks or supplies or create safe learning environments.

Rather than battling the crux of the issue, in which education is treated as a luxury rather than as a need, turning toward private education is putting a band-aid on a serious wound to try and help it heal. We must realize that the current state of the education system further widens the privilege gap between the wealthy and the poor.

Turning toward private schooling will only worsen the existing problems of unequal education quality. We must realize that this inequality is merely one out of many effects resulting from the underlying issue of poverty, and that avoiding this reality will prevent a vast percentage of American children from having the resources to learn, grow and prosper.

Minju is a junior in Media.