Editorial | This is extremely dangerous to our democracy 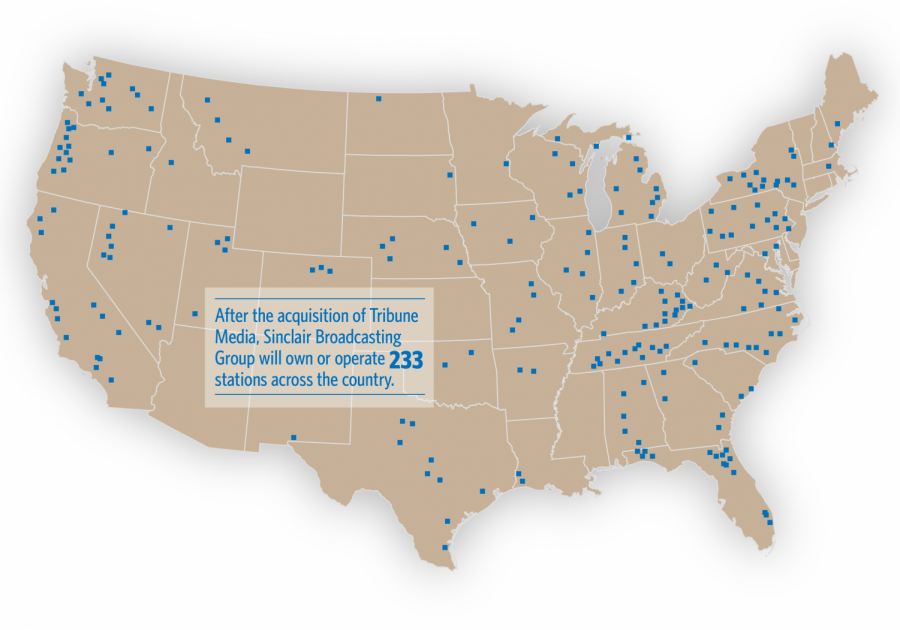 By The Daily Illini Editorial Board
April 5, 2018

“The sharing of biased and false news has become all too common on social media.”

“Unfortunately, some members of the media use their platforms to push their own personal bias and agenda to control exactly what people think.”

At face value, any rational citizen can agree the above statements are true. Politicians on either side would argue for an impartial media that solely reports the facts. And almost all journalists strive to live up to this goal.

These lines are taken from one script sent out by Sinclair Broadcast Group, the largest broadcaster in the country. But just reading them doesn’t do the original video, edited and posted by Deadspin’s Timothy Burke, any justice. The video reaches a point where a single line of the script is played in unison with dozens of other news anchors, and they are all saying the same words as if it’s a hive mind. This is when it becomes a lot more disturbing.

At that point in the video, it’s too difficult not to care, no matter who you are. This is borderline propaganda. When there’s a coordinated, scripted, nationwide “news” segment intended to influence the actions and opinions of the public with biased viewpoints  — that’s propaganda.

This begs a question: Can America still trust its local news anchors when they’re forced, like puppets, to read exactly what they’re disapproving of?

In Trump’s presidency, mainstream media giants like CNN, NBC, CBS and ABC are perceived by many citizens as invalid news sources that spread misinformation, or “fake news.” We’ve been told to look to their local stations — or FOX — instead, for the truth regarding all things newsworthy.

It’s important to recognize that mainstream media’s declining reputation is largely due to an increasingly polarized political climate. And there’s no doubt Trump himself plays a role in this; with almost 50 million followers on Twitter and more than 2,900 tweets since his inauguration — almost seven tweets per day — it’s difficult not to associate the popularization of fake news with Trump and his administration.

So it’s only the local stations — or, again, FOX — where fake news is supposedly almost never present. These are the stations with the anchors, meteorologists and personalities we all know and love. And it makes sense because the public tends to trust them. Local news stations are almost always more focused on local reporting, which brings in a dedicated local audience. For some, these anchors may even be the ones we grew up with.

But when Sinclair required nearly 200 news stations across the country to broadcast the same script last month, it began to shift our perceptions of the anchors. We’re told not to trust the big boys in cable and to listen to our local news.

Sinclair pushes out required segments, more formally known as “must-reads,” for its anchors to broadcast. These include anything from terrorist recaps to pro-Trump talk shows.

What’s more alarming is how Sinclair is currently negotiating to acquire Tribune Media, the conglomerate owning WGN, for $ 3.9 billion.

Let’s break this down. Tribune Media currently owns 39 stations, which covers about 30 percent of American households. Sinclair’s reach is substantially wider, with 193 stations broadcasting to about 40 percent of households. Knowing that the biggest television station operator in the U.S. has the potential to broadcast propaganda-like content to over 70 percent of all TV viewers is inherently unsettling.

This means much more local news anchors would be required to air these must-reads, further pushing Sinclair’s conservative agenda whenever needed.

However, it’s not like all local anchors agree with what Sinclair is making them do. In fact, some of them expressed disapproval in these must-reads. But many chose to stay with Sinclair simply because the consequences of quitting outweigh anything else.

For a lot of anchors at Sinclair, they’re caught between a rock and a hard place. Many know exactly what they said last month. Many know they read a script that is neither truthful nor transparent. Many of these journalists have dedicated their entire careers to gaining trust and credibility for their names, only to have it questioned in one day.

Yes, there are left-leaning news companies, talk shows and publications that produce left-leaning content. But it’s never gotten to a point like this.

This isn’t some left-wing or right-wing sissy fight because the problem is beyond that. It’s extremely dangerous to our democracy.