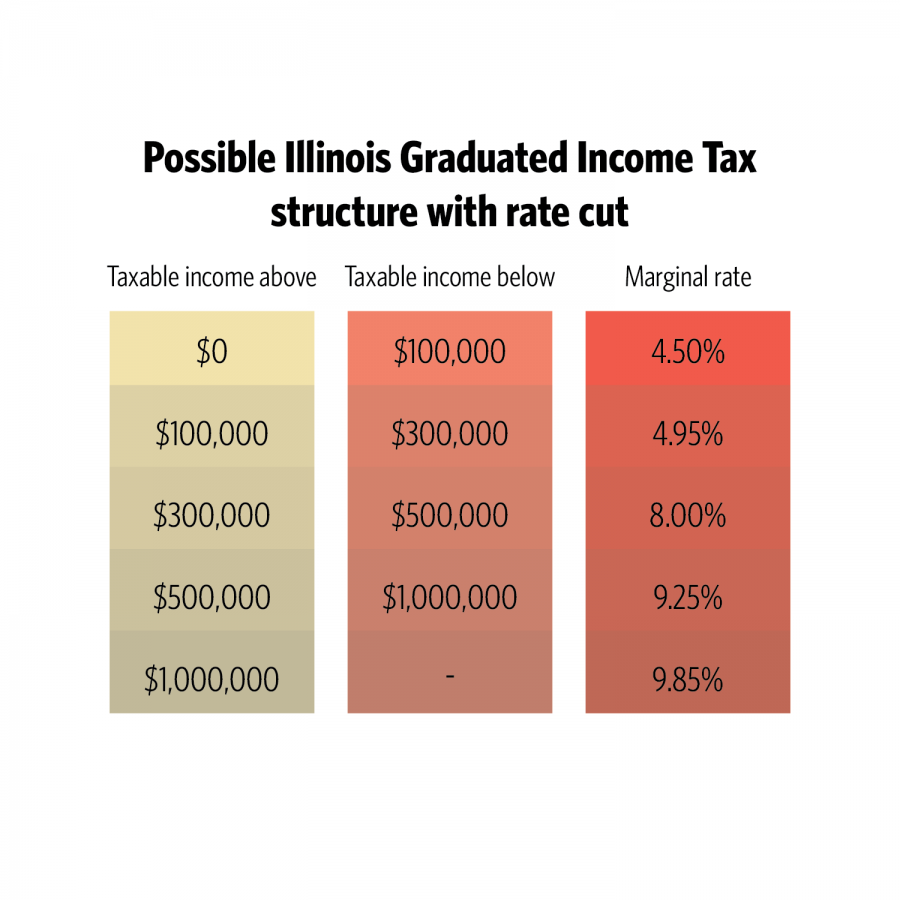 It’s no secret Illinois has one of the highest tax burdens in the nation. In 2016, the Tax Foundation ranked Illinois the fifth in the nation for overall tax burden and in March, ninth for property tax burden. Since the 2016 report, the income tax rate has only increased from 3.75 percent to 4.95 percent. However, the problem is not so much that Illinois taxes people more. The issue is the distribution of who pays what percentage of taxable income. This is highly imbalanced toward middle and lower class people, creating a large burden for a vast majority of residents.

A fairer and more modern tax system would be a graduated income tax, which most other states have already adopted.

Illinois’ 4.95 percent flat income tax rate is incredibly regressive. It blatantly takes a higher percentage of income away from working class families and minimizes that percentage for those who earn substantially more. According to a report by the Institute on Taxation and Economic Policy, the bottom 20 percent of earners pay 14.4 percent of income in taxes, the middle 60 percent pay 12.3 percent and the top 1 percent pay 7.4 percent of income.

This then results in the state relying more heavily on alternative taxes, such as property or sales taxes, to fund the state. The same ITEP report ranks Illinois as possessing the eighth most regressive tax system in the nation. A graduated income tax could easily fix this problem by leveling out those percentages.

Yet many middle and working class Illinoisans fear a graduated income tax. Since cumulative taxes are already high, despite the actual income tax rate being among the lowest in the nation, the notion that progressive tax brackets will fall heavily on the middle class is highly perpetuated by its opponents. This is easily dismissable if a graduated tax system is implemented correctly.

With these brackets, according to the report, 49 out of 50 Illinoisans would receive a reduction in their income tax burden and those who will see an increase will not be facing rates any higher than other Midwest states. Taking a look and comparing the brackets to the current rate, anyone earning under $100,000 would be receiving a 9.1 percent decrease in income tax burden, while those making under $300,000 would be paying the same amount as they pay now.

However, those with unchanged rates could still receive an overall tax break in another way.

As aforementioned, Illinois property taxes are among the highest in the nation. When people refer to Illinois’ tax burden, the bulk of it is due to property taxes. A graduated income tax has the ability to help reduce that burden as well. If the CTBA’s brackets were to be implemented and bring in two billion extra dollars, lawmakers could finally be able to create a much talked-about system for property tax relief.

Wisconsin already has a system in place for which individuals receive credits from the state that are automatically applied toward their property tax bill. This system is not simple, as the amount of credit given incorporates property value based on improvements and the school district the property is located in, which leads to rather elongated formulas for how the state calculates the total credit earned for the property owner. But a similar structure in Illinois would lower overall property tax bills in Illinois for those who need it most.

Another misguided argument against a graduated income tax is wealthy people will flee the state, thus leading to job creators leaving and hurting economic opportunity in the state. This belief is also easily disprovable and used as a scare tactic by special interests toward those who would highly benefit from a graduated income tax.

In “The Myth of Millionaire Tax Flight: How Place Still Matters for the Rich,” Stanford University sociologist Cristobal Young researched 13 years of tax data for every U.S. millionaire. He found that only about 2.5 percent of millionaires moved to new states each year, and there was no overall correlation between tax related policy and those decisions.

This is because those who are incredibly wealthy often build their fortunes based on the geography of what industries are around them. Wealthy technocrats don’t move out of California. Financial moguls don’t move out of New York or New Jersey, all states which have substantially higher tax brackets for top earners than Illinois. In addition, the sense of community for any family that resides in that given community serves as a priority for staying in the location they’ve spent most of their adult life.

Governor-elect JB Pritzker campaigned on bringing a progressive income tax system to Illinois. This will take a while, as the Illinois constitution would have to be amended in order to do so. Pritzker says it would take about two years for the process to be complete, but it would be beneficial to all of Illinois if he and the General Assembly make good on that promise.