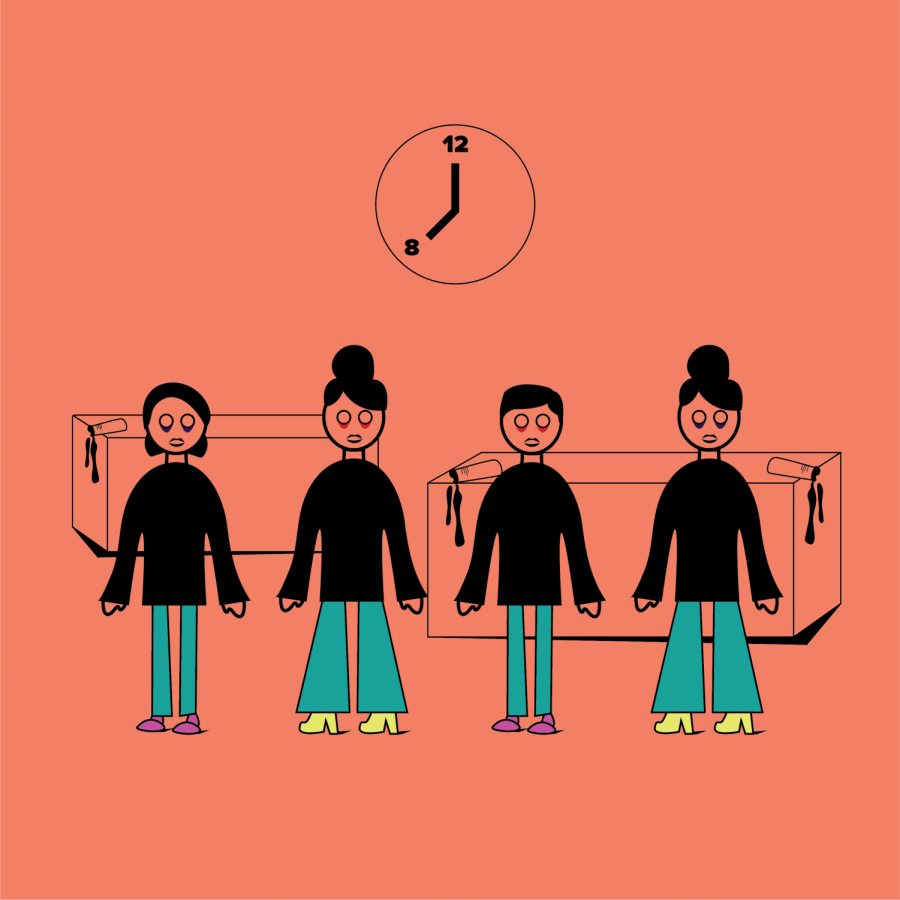 It’s a nearly uncontested truth on campus: 8 a.m. classes suck. Students in every major avoid them like the measles. But sometimes in college, somebody contracts measles through no fault of his or her own; sometimes, measles is the only section not already full.

No one wants to wake up early to go sit in lecture and listen to some guy explain how to solve triple integrals. And don’t even get me started on labs and discussions. All I’m saying is whoever thought it would be a great idea for a bunch of hungover, sleep-deprived 20-something college kids to play with acid at 8 a.m. without even so much as a sip of coffee should be fired.

Now you might think, well, if these students know they have an early lab the next morning, they should just not go out and go to bed early to mentally prepare themselves for success. And you wouldn’t be wrong.

However, college students don’t think that way. We still think we can do everything: party hard with our friends, get totally wasted, vomit on the sidewalk, pass out for a few hours, maybe throw up again and then show up to our lab the next morning and single-handedly solve chemistry. Boom. Mic drop.

There is a simple solution to all of this, and it might help with a few other issues too: The University could offer more classes later in the day.

For many students, this would also alleviate a lot of stress when it comes time to register for classes. There is a lot of hype and anxiety around when people get to register. Those who can register earlier because of higher class standing or scholar programs gobble up the best course sections. Then, those without super-student abilities are left with the dregs, and next thing they know, they’re measuring the friction between the wheels of Matchbox cars and a piece of bent sheet metal at 8:36 a.m. on a Tuesday.

On top of this, later classes would allow students time to wake themselves up, eat some breakfast and prepare for the day. This way, we aren’t stumbling into those morning lectures bleary-eyed with half a granola bar hanging out of our mouths.

Professors consistently complain about their students’ lack of engagement during their lectures. Well, later classes could help with this as well. Instead of students ending up zoned out and staring at the wall in an exhaustion-induced haze, students might actually ask a question or two about Structuralist literary theory — if they were alert enough to comprehend English.

Another point is some students have full-time or part-time jobs that take up a lot of their energy. Later classes would give these students time to work earlier in the day and learn in the evenings. This way, their classes do not interfere with their work schedules, which give them the money they need to take the classes in the first place.

I bet several of you still think early classes are good. If nothing else, they’re a great way to get students acclimated to life in the real world. After all, once we have jobs from 9 to 5, we can’t exactly just choose a later time to show up. But for many of us, this is our last chance to sleep in and to choose when we work, maybe for the rest of our lives.

To be absolutely clear, I am not insisting that the University do away with morning classes in totality. I know there are a few weirdos out there who prefer morning classes. While this is certifiably insane, I do understand some people concentrate better during the grossest hours of the day.

But on the flip side, others have improved focus in the reasonable hours of the afternoon. So give these night owls the same courtesy awarded to the early birds: the ability to choose their fate.