Opinion | When it comes to mudslinging, sling your mud somewhere else 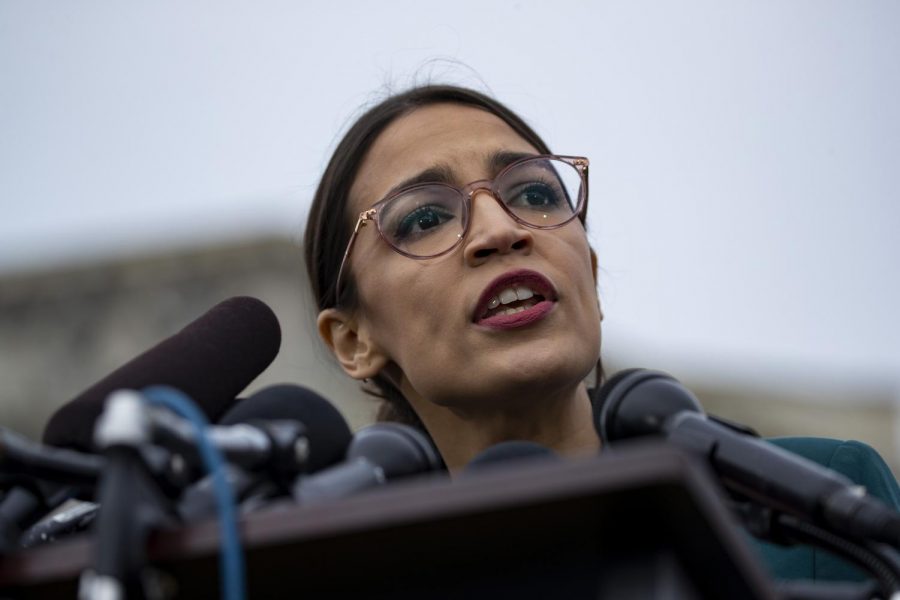 Dem. Rep. of New York, Alexandria Ocasio-Cortez, speaks during a press conference held at the United States Capitol in Washington, D.C. on Feb. 7. Ocasio-Cortez has faced many personal attacks during her candidacy.

Freshman representative Alexandria Ocasio-Cortez has been dominating the news cycle for a few months now. The right claims she is the new face of the Democratic party and the left claims she is the new bogeyman for the right to crusade against. She is on the progressive left wing of the Democratic party, and as a young woman familiar with social media and aware of how to manipulate the media cycles, she has made her presence known.

Rep. Ocasio-Cortez has learned quickly that she has to get her facts straight before she begins to espouse them. Politifact has given her a pants on fire rating for multiple claims she has made on unemployment. She subsequently drew a lot of criticism for making erroneous claims about America’s poverty rates on the Daily Show. Simply put, the 29-year-old Democratic lawmaker still has a lot to learn about fact-checking her own economic claims before making them.

Large and publicly documented errors like these leave a lot for the right to raise legitimate concerns about and criticize her for. Yet it feels as if the right seldom seizes these opportunities and rather turns to their ineffective and petty slander campaign of the woman. To articulate this point in summary, the right, generalized here to refer to Fox News talk show hosts and internet trolls, misconstrue her policy positions and attempt to hurl character attacks at Ocasio-Cortez, most of which backfire spectacularly or appear trivial and petty to the masses.

While the beratement began as soon as she won her primary against long time incumbent Joseph Crowley, one debacle began with the representative from New York tweeting about struggling to afford apartment rent in DC before she begins receiving a salary. What followed was a Washington Examiner reporter posting a picture of Ocasio-Cortez and insinuating that her struggles are fabricated based on the clothing she was wearing.

Ocasio-Cortez retorted and also had a bone to pick over the fact that he had called her a “girl” in a tweet, something many on the left felt was demeaning to a 29-year-old woman and especially to an elected Representative. Ocasio-Cortez responded with spanish lyrics when someone adverted on Twitter that there was a panel of four on Fox News discussing Ocasio-Cortez’s shoes.

But the attacks have not only revolved around the representative’s wardrobe. Sean Hannity awkwardly tried to nickname her in front of his viewers with names such as “O-socialist-o” and “O-crazy-o”. Recently the Tennessee GOP shared a racist meme involving Ocasio-Cortez in their newsletter, according to the Tennessean. Countless caricatures berating her positions, generally the strawman that Ocasio-Cortez is for ‘free everything’, have exaggerated her physical features, particularly her teeth, in order to make her look ugly or in some cases resembling a donkey (the Democratic party mascot). Certain people on the right had even stooped low enough to attack the home she grew up in and mocked her high school nickname, Sandy.

Then there was the fake nude of Ocasio-Cortez circulated by internet trolls and briefly included in a misleading Daily Caller article that was of a woman in a bathtub looking from the shins down. It was interestingly foot fetishists that were able to debunk this and concluded that these feet did not belong to Ocasio-Cortez.

Pushback against the young congresswoman has not only originated from internet trolls and Sean Hannity. During the vote to elect a new Speaker of the House, Republican lawmakers, in a gesture of great incivility, booed Ocasio-Cortez on the House floor as she voted for Nancy Pelosi. Ocasio-Cortez called out the Republican dissent in a tweet later, saying that “Over 200 members voted for Nancy Pelosi today, yet the GOP only booed one: me.”

Perhaps the grandest misfire was what happened the night before Ocasio-Cortez’s swearing in January 3. A video emerged on the internet of the representative dancing to “Lisztomania” by Phoenix as a freshman in college. The video was intended to embarrass Ocasio-Cortez and denigrate her leadership and professionalism as a congresswoman, however, the right wing opposition attempting to do just that severely misaimed. Social media lit up with support for Ocasio-Cortez and confused many who wondered how the video was supposed to embarrass her. Seeing this, Ocasio-Cortez responded with a short video of her dancing in the capitol building outside her office.

Pundits, talk show hosts and Twitter users have also misconstrued many of her policy positions. It would be disingenuous to say her positions are not progressive or are not worthy of criticisms, but if one is to criticize, at least state the policy position accurately or inform oneself on the actual proposal in question.

In particular, Ocasio-Cortez’s proposal for a 70 percent marginal tax rate on income above $10 million dollars invited lots of outrage. The proposal elucidated how many people fail to understand marginal tax rates, as many criticisms began with something along the lines of “Alexandria Ocasio-Cortez wants to tax your income at 70 percent!” Not only does this fail to include the important threshold of $10 million that the tax would kick in at, but it incorrectly interprets what a marginal tax rate is. If you are not sure either, see here.

Rep. Ocasio-Cortez is comparatively a fringe politician with contentious ideas for reform but the treatment she has received so far from some on the right is far from reasonable, it’s deplorable in a sense. She has not had rational actors disagreeing with her and calling her out when she is wrong, she has had bullies attempting to belittle her based on her character. This is not the civility that helps to stimulate discussion surrounding ideas and preserve the pluralism in our democracy.

These are childish attacks that only help Rep. Ocasio-Cortez’s image to improve. For a politician who has suggested publicly many progressive ideas and harbors a more radical ideology, surely her critics could raise legitimate logical and economical problems with her platform rather than continually self-inflict wounds.

Plenty of misfires have proven that Representative Ocasio-Cortez only grows stronger from each attack, but evidently many on the right have not learned that lesson yet.