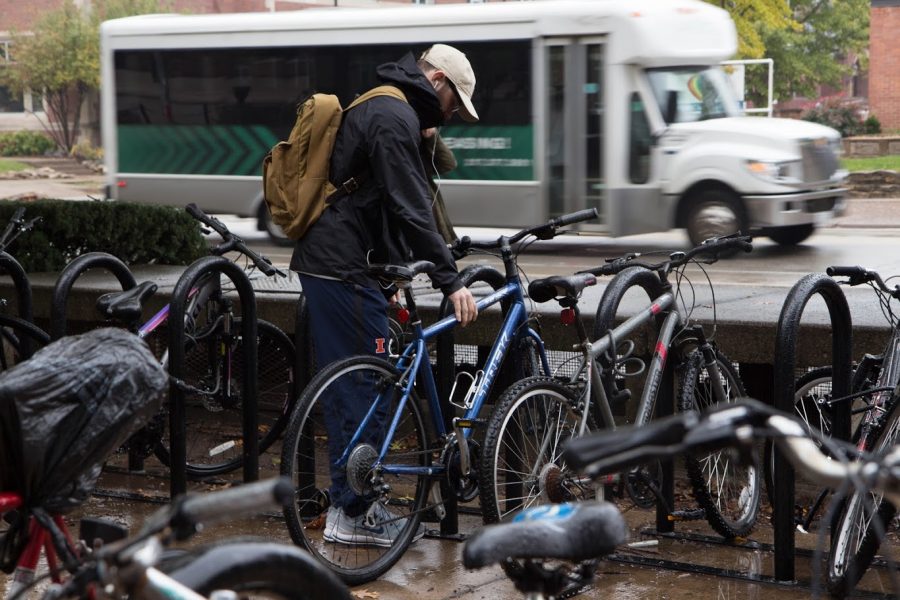 A student unlocks his bike next to Wright Street on Oct. 26. Columnist Andrew argues the existing dichotomy in the fat shaming debate is a fallacy and proposes a third cause: American culture. Bicycling is a great way to offset the sedentary lifestyle.

Fat shaming is almost as large of an epidemic as the obesity it targets. It is a prevalent phenomenon that demeans those on the principle of personal responsibility.

Overall, Americans are divided on treatment of overweight people.

The “fat acceptance” movement believes genetics dictate one’s metabolism and body type; therefore, weight is less controllable than the prevailing sentiment would suggest. The opposition contends one’s weight is a reflection of their personal choices, and it is not healthy for society to prop up “unhealthy” people as role models by normalizing their lifestyles.

Studies show both genes and lifestyle influence one’s weight, but studies also maintain neither genes nor lifestyle can be wholly to blame for obesity. Therefore, both sides are looking at this issue the wrong way.

In Europe, one observes a mystifying lack of overweight people. However, Europeans make the same rational choices as Americans and do not differ in genetics so greatly as to explain the void of overweight people. Therefore, the disparity must be engendered by a third variable seldom blamed for obesity rates: culture.

This debate has been framed as a false dichotomy. But the truth is the environment — America’s food and transportation cultures — is the true culprit.

Americans are products of their environment, so it is time America wakes up and demands the environment change. It is simply more difficult to stay skinny in the U.S. than it is in Europe. An American who utilizes a daily gym membership may still be more overweight than a European who does not veer from their daily routine to purposefully exercise. It’s not for a lack of trying, and it’s not for genetics; it’s for apathy toward a shoddy culture that requires an overhaul.

Food culture in America is completely backward. The government subsidizes meat, cheese, and corn heavily which studies suggest make us fatter. American food is processed to an excessive degree and loaded up with an immoderate amount of sugar. The U.K. also has a growing obesity rate. U.K. citizens aren’t becoming lazier by the day and making worse personal choices; food is becoming more processed, further suggesting cultural norms shoulder much of the blame. Dieting is crucial but is difficult in America, especially when not affluent.

While most of the problem certainly lies with lower-quality food that is nearly inescapable in American supermarkets, America’s tendency to drive everywhere inexorably contributes to high obesity rates as well. Long commutes present in America are just not in Europe. Europeans bike and walk significantly more than Americans do.

Sure, America’s vastness and suburbs make long commutes difficult to eradicate, but some lessons can certainly be learned from elsewhere. Bike lanes and congestion taxes would help to encourage Americans to integrate daily exercise into their normal routine. Some European workplaces even have showers so bikers can work while remaining hygienic.

Blaming American food culture is imperative because of misdirected anger. If Americans felt as personally affronted by government encouraging low-quality food as they do by fat people for existing, government reform would have been done yesterday.

People are great at identifying the problem correctly: America has a high obesity rate. But people are not  using critical thinking skills to ascertain the root cause of the issue and propose a solution.

In accepting a high obesity rate, Americans allow food producers to continue producing the same low-quality garbage without any accountability. In fat shaming those who are overweight, Americans accomplish the same thing. In addition, fat shaming is ignorant to the intricacies of the victims’ lives, to the existence of food deserts and to the danger of biking or jogging outside in unsafe neighborhoods.

Every time someone looks at a fat person and says, “Go to the gym, and eat more vegetables,” Perdue and Tyson Foods celebrate. They’ve succeeded in avoiding any blame for high obesity rates as they watch average Americans bicker over a false dichotomy.

No one thinks to censure the limited options that strangle the American consumer like a boa constrictor. In fact, it is the same society that foists unhealthy food upon its people that has conditioned them to associate any weight gains with personal irresponsibility.

If an overweight person in America could make the same daily decisions in Europe and be skinny, it is unfair to expect the overweight American to spend more time exercising and more money dieting. At the end of the day, personal responsibility cannot be avoided for our weight. But when people make rational and economical decisions for themselves and end up overweight, it is an institutionalized culture problem which must be changed.