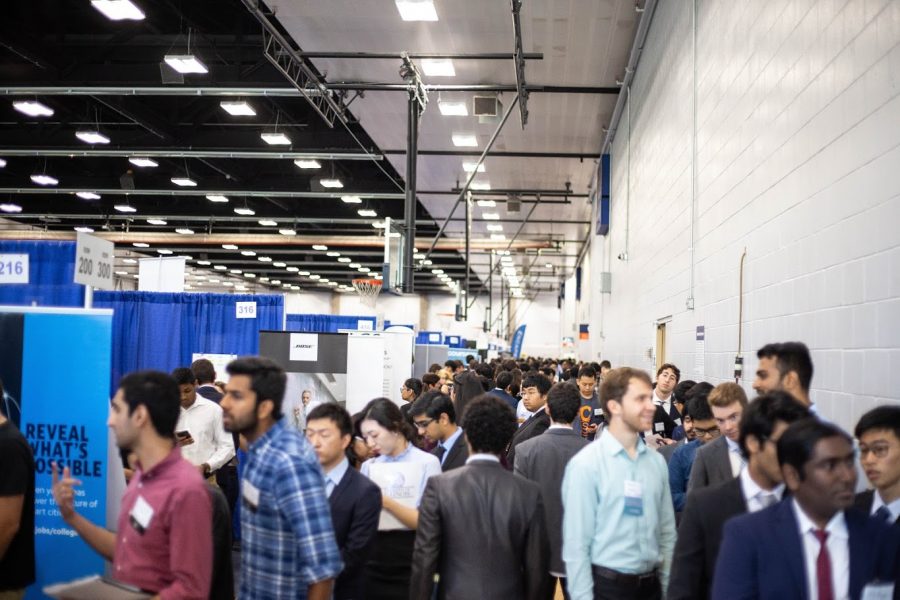 Thousands of students packed the ARC at the Engineering career fair on Sept. 11, 2018.

Career fair season is upon us, and along with it the perennial question, “What does ‘business casual’ mean?”

Career fairs are stressful just as a concept — if I wanted to be massively uncomfortable in a large crowd of sweaty people, I would get on a bus from the Main Library to the Ikenberry Commons. As if wearing slacks and heels isn’t already its own form of torture, the whole point of a career fair is to talk to strangers whose job it is to judge you.

It’s an inconvenient truth that getting hired is less about whether you know what you’re doing and more about whether it looks like you know what you’re doing, which I unfortunately never do.  When you’re surrounded by humble-bragging tech bros and smarmy charming frat guys, it’s pretty easy to feel like you’re the least qualified person in the room.

When you’re halfway through figuring out how to change the column spacing on your resume at 3 a.m. and realizing maybe companies don’t want to hear about the skills that getting peed on at your babysitting job taught you, it’s pretty easy to decide it’s just not worth it.

That being said, a study from the Harvard Business Review in response tore apart that idea, asserting the reason most people don’t apply for jobs they’re only partly qualified for is because they don’t want to waste time applying for a position they know they won’t get. It’s true there is a trade-off between taking a chance on yourself and burning out applying for internships at companies that only hire juniors and seniors when you’re a freshman. Most of the time, sacrificing your sanity just isn’t worth it. I promise.

But as an article from The Atlantic titled “The Confidence Gap” points out, confidence is a legitimate issue — women consistently underestimate their qualifications and performance, whereas men consistently overestimate their abilities, even when they’re absolutely incompetent. Even women who are insanely qualified, have tons of experience and are currently doing amazing things suffer from debilitating self-doubt.

There’s no easy solution to the issue. Advice like “fake it ‘til you make it!” and “just put yourself out there!” are meaningless platitudes, especially given the kind of competition job applicants face today. It might help to know the reason you feel like you know literally zero things despite almost fifteen years of formal schooling might just be because of institutionalized psychology and not because you have an exponentially decaying knowledge retention rate.