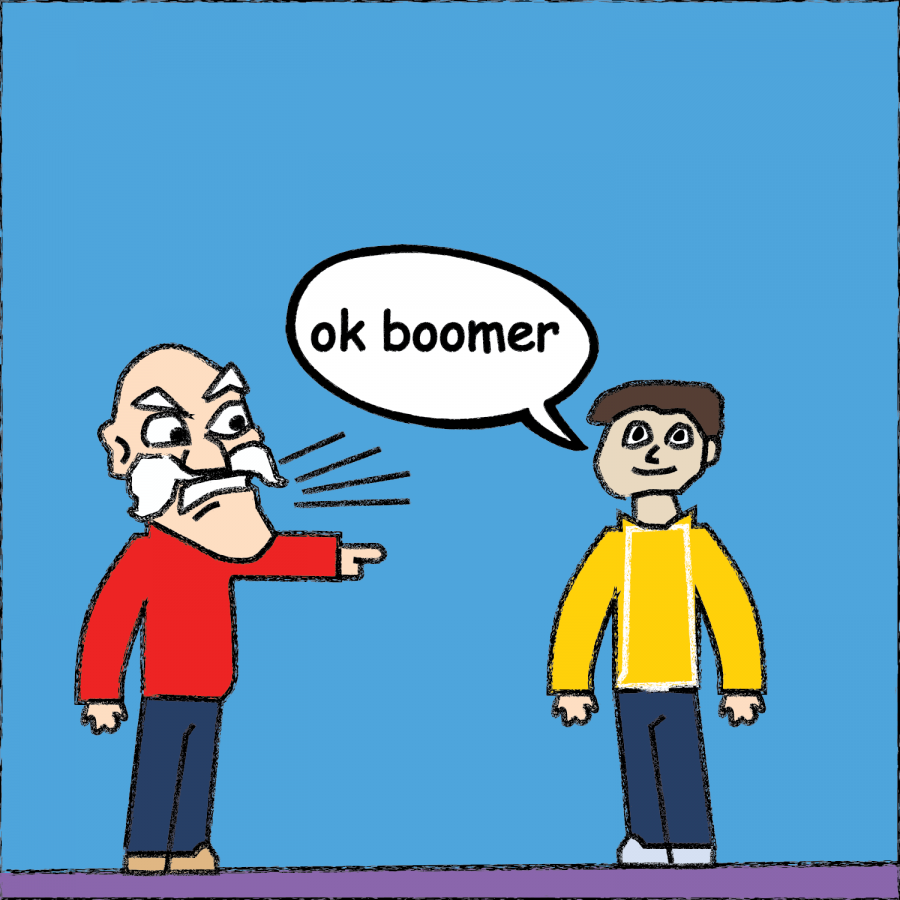 Recently, a tsunami of new memes has flooded feeds of social media. I’m talking about the ones with the newly popularized retort, “OK, boomer.”

Since its rise in popularity and subsequent appearance in every part of the internet, “OK, boomer” has caused an explosion of online discussion regarding generation Z, millennials, baby boomers and the divide between the young and old. But what is the significance of this phrase, and why does it have so many people upset while so many others find it amusing?

“OK, boomer” is used online as a response to an older person — almost always a baby boomer — who has made some comment that is so horribly wrong, off-base or uninformed it is easier to use the condescending remark “OK, boomer” and move on rather than try to argue or explain.

Just think of every time an older member of your family has said something that made you shake your head, roll your eyes or just cringe. These statements usually begin with: “Kids these days,” or “When I was your age,” or — my personal favorite — “You know, back in my day.” Young people have finally fit all of their disgust with these statements into an easy comeback.

But what does it say about the state of our culture to have young people writing off the opinions of an entire generation? It says a lot about boomers, actually, and it also represents many of the challenges that have been unique to millennials and members of Gen Z.

Millennials, in particular, are having a much harder go at life financially than did their baby-boomer forebears. Millennials, for example, earn about 20% less than  boomers did at their age, despite the fact that millennials are on average better-educated. Moreover, 62% of millennials report that they live paycheck to paycheck, and many of them are putting off significant milestones in life due to high levels of student debt.

Through this lens of financial disparity, “OK, boomer” can be seen as a justified response to an older generation that likes to complain about the actions of young people without taking into consideration many of the new problems that they didn’t have to grapple with.

This kind of uninformed and out-of-touch criticism from older people was exemplified rather perfectly in a recent comment made by Martha Blyth. Blyth is a senior vice president for AARP and also the editorial director for AARP media — oh, the sheer irony. In an interview with Axios, when asked about “OK, boomer” she responded: “OK, millennials, but we’re the people that actually have the money.”

This is exactly the kind of idiotic response that only helps to prove the point young people are trying to make. Yes, Martha, you guys do have all the money. That’s because baby boomers were one of the luckiest generations in American history. The postwar economic boom gave many of them the opportunity for a comfortable upbringing and a stable, good-paying career straight out of high school. Blyth and many people with her mindset, would benefit from trying to imagine what life is like for so many young people who weren’t so fortunate.

None of this is to say millennials and members of Gen Z are perfect or that they don’t have legitimate issues of their own. Believe me, they certainly do. Cancel culture and the strange desire to forgo consumption of gluten without having Celiac disease both come to mind.

But before being so quick to judge or make all-encompassing negative statements about “kids these days,” I think many older people would be better served keeping in mind some of the unique challenges — specifically those related to finances — that many young people today are dealing with.