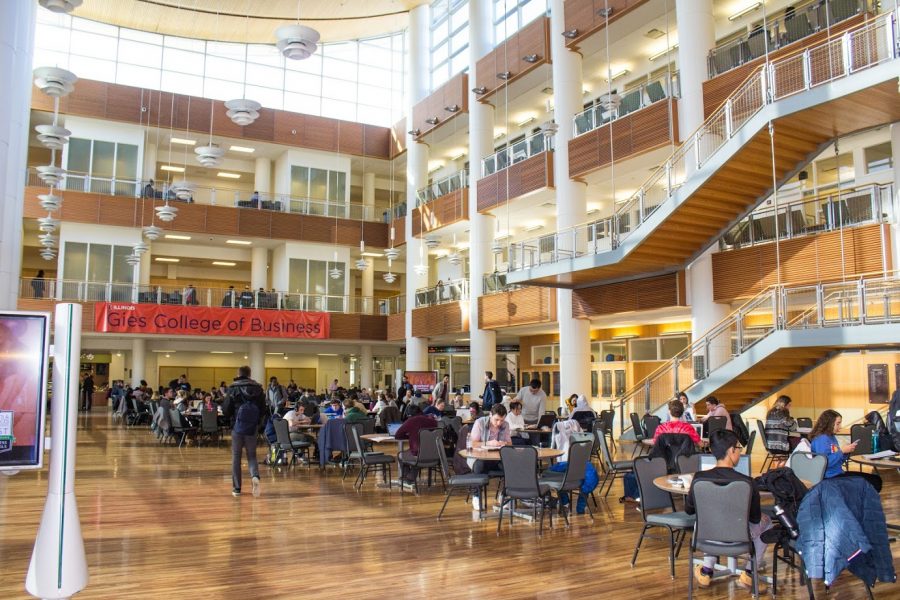 Students studying for their finals in the Business Instructional Facility on Dec. 15, 2017.

The Gies College of Business boasts it is one of the best accounting programs in the United States. U.S. News & World Report ranks Illinois at number two for their 2020 accounting ranking. Gies is responsible for training the top accounting leaders of the future. But how well does it do that? Illinois academics and administrators need to consider their impact on not only student employment but on the accounting and financial services industry in its entirety.

The Illini Success annual report for 2017 to 2018 says as many as 56% of accounting graduates continued with school, and 42% were employed. Compare this to Finance and Management majors, where 83% secured employment. The average starting salary for the class of 2018 was $65,847.

Illinois accounting graduates do well for themselves. Industry data can also provide the bigger picture for Illinois.

How significant is Illinois as an institution in the accounting world? Some of the employers that employ the most Illinois graduates include Amazon, Deloitte, Epic Systems, EY, KPMG, Microsoft, PwC and the University itself. These employers each hire at least 25 Illinois graduates, which makes these companies the most common destination for Illinois alums. Included in this list are all Big Four accounting firms.

The Big Four accounting firms are Deloitte, EY, KPMG and PwC. They are considered the gold standard in accounting. They audit almost half of all publicly traded companies and nearly all companies included in the S&P 500 index. According to LinkedIn, UIUC has the most extensive presence in all four firms out of all American academic institutions.

Illinois is a leader in the accounting world, and what it teaches creates a real impact in corporate America and the economy at large.

Educators can look toward the Big Four firms to understand the trajectory of the industry as a whole, and it is not looking good. The Big Four collectively inaccurately audited companies 31% of the time since 2009. KPMG in 2017 alone failed to accurately audit its clients 50% of the time.

Is this industry-standard acceptable? Deloitte seems to think so, at least for itself. Deloitte has the lowest failure rate in the Big Four between 2009 and 2017 of 27.6%. While other Big Four firms have kept silent, Deloitte has boasted about its “positive trajectory” in audit quality. Analysts at the Project on Government Oversight (POGO) would disagree. They reported the Public Company Accounting Oversight Board (PCAOB) has been empowered to be a watchdog for audit firms but is not doing its job. They calculated the PCAOB had fined the Big Four only $6.5 million out of the $1.6 billion they could have for performing defective audits.

Is there mismanagement at the PCAOB, or is this normal watchdog behavior? It is hard to say. The PCAOB overhauled its entire board last year and has recently undergone other forms of scrutiny lately.

What is interesting is not who is in leadership at the PCAOB but who is not. Out of all 34 Standing Advisory Group members on the PCAOB, based on readily available public information, only one is an Illinois graduate.

Why are there not Illinois graduates doing the work of oversight? Why has the significant presence of Illinois graduates not seem to do anything to improve audit quality in the Big Four? All of this suggests Gies students may not be well equipped to deal with ethical dilemmas or corporate responsibility. The Gies College of Business is offering 194 courses in the spring semester, but only one class has the word “ethics” in its title, and only one other addresses professional responsibility.

Educators need to consider how well Illinois graduates are being trained to deal with the financial problems of our generation. Ethics and responsibility may be addressed implicitly in the classroom. Still, they are not being practiced on a wide scale in the most important financial institutions in the country and the world.