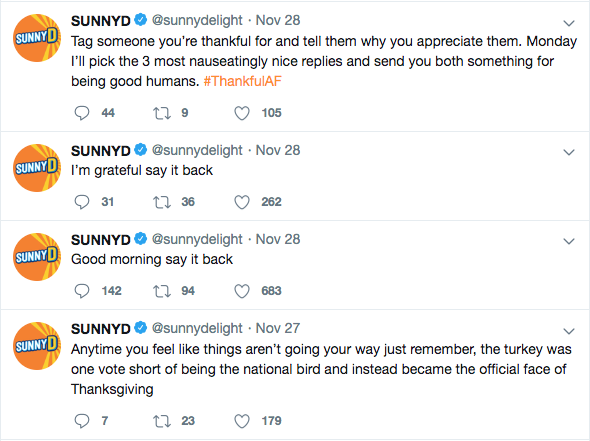 SunnyD tweets as if it was a person. Columnist Dylan urges people to recognize corporate personification on social media platforms and highlights the negative impact of artificial personhood.

In the U.S., corporations are generally afforded many of the same rights as people. While the ethical implications of this are still contentious to this day, it is the law of the land.

However, this debate has remained primarily fixated on the moral, legal and financial effects of this policy. But there is another aspect that has recently manifested and has yet to be addressed: the link between corporate personhood and “brand Twitter.”

“Brand Twitter” is not necessarily new anymore. Still, the idea is several brands and corporations, notably Wendy’s, Taco Bell, Steak-umm and SunnyD, have created online personas via their Twitter accounts to better relate to young people.

Before this phenomenon, which became popularized sometime in early 2018, Twitter was mostly used by brands to hawk their wares without personality. Simple posts about new products or customer satisfaction dotted their feeds, with the occasional hamfisted attempt at humor.

But then something changed. Wendy’s popularized this practice first, starting feuds with other products. But then many others began to jump onto this bandwagon, including the brands mentioned earlier.

In light of this, people have begun to develop parasocial relationships with these brands. They check these Twitter accounts for their latest injection of ironic humor. They laugh, sympathize and chastise these large, faceless corporate entities as if they were sitting right next to them. The theoretical gap between man and conglomerate has been bridged, at least over Twitter.

Perhaps most significantly, in February of this year, SunnyD infamously tweeted, “I can’t do this anymore” on its Twitter page. While a purveyor of sugar-laden pseudo-orange juice feigning depression is already morally dubious, the fact other brands rushed to its aid to “console” it is even more bleak. The alienation we experience (which has partially been caused by these corporations) is being masqueraded by brands as if it is a character that can be played, not a feeling to be experienced.

This sort of emotional voyeurism can only be achieved by an entity incapable of expressing actual emotion, such as a company. But repulsive as it may seem, this is just the logical conclusion of corporations being treated like people.

Eventually, this personhood evolves from merely appearing as one in court to manifesting on the internet as a flesh-and-blood person capable of relationships. They speak in the first person, feel anguish and have a sense of humor. They create parasocial relationships with consumers in a cynical attempt to appeal to a generation already wary of overt advertising.

But it should be taken for what it is: advertising. SunnyD isn’t depressed, Wendy’s doesn’t make mixtapes and Steak-umm doesn’t care about you. Relationships can only be built between actual living things, not abstract entities attempting to appeal to your emotions to siphon your wallet.

Corporate personhood has reached its climax with brands attempting to be our friends, to be people. But it is only through us they can self-actualize.

Remember what they indeed are and what they truly want. Everyone has people in their lives who care about them; don’t neglect them in favor of a snide Twitter account subtly infiltrating your daily life. If your compassion is the only thing that cannot be commodified, then it should be shared only with those who genuinely deserve it.