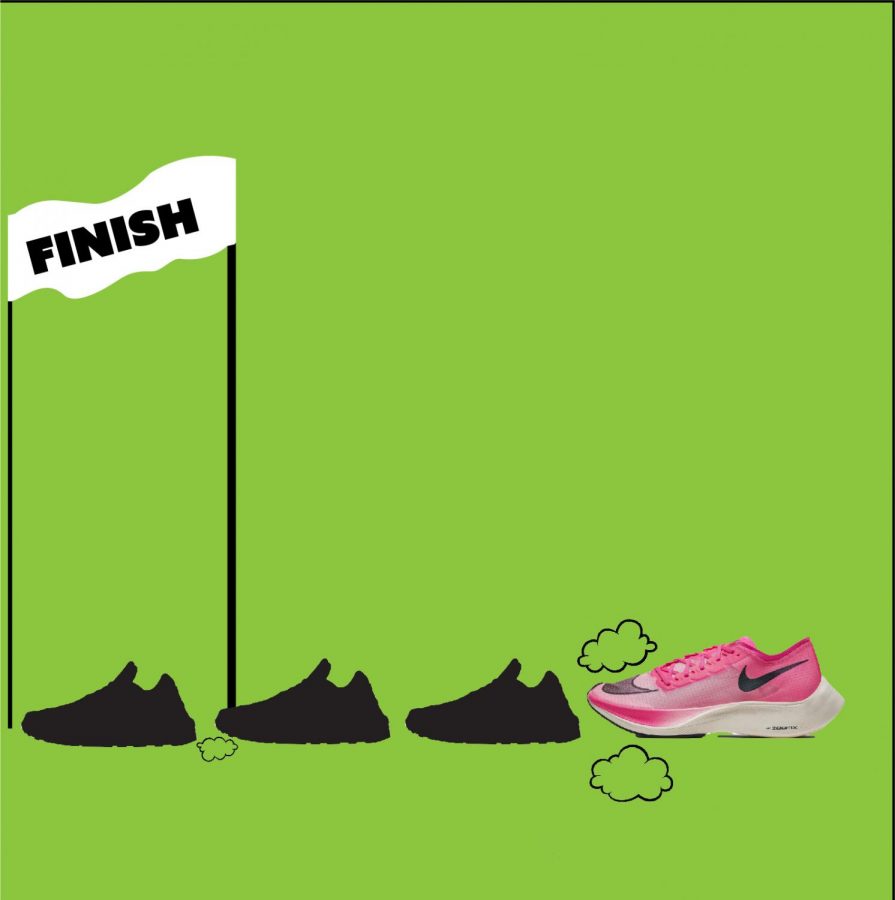 The running world has been taken by storm over the past several months by Nike’s latest and greatest high-performance shoe: the Nike ZoomX Vaporfly NEXT%. A debate has emerged about whether the shoe should be banned from competition for providing an unfair advantage to wearers.

Banning the Vaporfly and similar models would strike against the interests of runners by arbitrarily stalling technological innovation in the sport.

The Vaporfly seized the attention of the running community after versions of it were worn in “31 of 36 top-three finishes in major marathons last year.” Nike research has claimed technology in the shoes give “an improved metabolic efficiency of 4%.”

The success of the Vaporfly compared to conventional running shoes is credited to the combination of Nike’s ZOOM foam material, which offers lightweight cushioning and explosiveness, with a full-length carbon fiber plate in the shoe. The prototype Alphafly, seen on Kipchoge, is said to feature three carbon-fiber plates within the ZOOM foam as well as a frontal air-cushioning device.

In response to concerns surrounding the Vaporflys, World Athletics released a statement announcing amendments to their footwear regulations to take effect before the upcoming 2020 Summer Olympics in Tokyo, Japan.

Their new rules require shoes to be available to the public for at least four months prior to competition, to contain a sole no thicker than 40mm and only contain one rigid plate (with the exception of a second to mount spikes on). The Vaporfly will continue to be permitted in competitions under these rules, but the Alphafly prototype model used by Kipchoge is now banned.

World Athletics clearly made a compromise here. The limitations on sole thickness and number of carbon-fiber plates should appeal to running purists who believe the Vaporfly is unfair, but it doesn’t completely limit the application of such technology. The decision seems unlikely to fully appease many.

This isn’t the first incident in which new technology has smashed records in sports. Notoriously, after the release of Speedo’s full-body LZR swimsuit, “more than 100 world records were broken … leading some to compare it to doping.” Eventually, the suit was banned in competition, but the material continued being used on a restricted amount of the body.

This ultimately becomes a question of balancing evolving technology with the integrity of the sport. While the Vaporfly indisputably aids in high performance, it does not guarantee high performance.

Runners have long used spikes on their racing shoes to seek higher speeds. The increased grip offered by the shoes coupled with their light weight make them optimal for shaving those extra few seconds off race times. These are widely used within the high school, college and professional scenes.

Those who favor banning the Vaporfly should seriously consider if they also support a ban on spikes. They both offer technology that is advantageous to athletes who choose to wear them, and they’re both widely available. Why ban one but not the other?

There’s a reason runners don’t race in hiking boots or flippers. There’s a reason spikes and the Vaporfly are so popular. Specialized footwear increases the quality of life in the sport by providing both the comfort and utility that allows athletes to compete at a high level.

Nike’s success with the Vaporfly will force their competitors to adapt to the market and produce comparable goods. As a result of this “arms race in shoe technology,” companies including Hoka, Brooks, Saucony and more are set to release their own foam and carbon-fiber plated models. This competition has and will continue to drive new technology that benefits athletes and consumers of all levels.

Advancing technology does not necessitate the destruction of the sport’s integrity. Anyone can spend $250 on a pair of Nikes, but only a handful of people in the world can run a sub-two-hour marathon in them.

As long as technology doesn’t serve to replace the training, technique and intricacies of any given sport, it should be welcomed as an improvement.