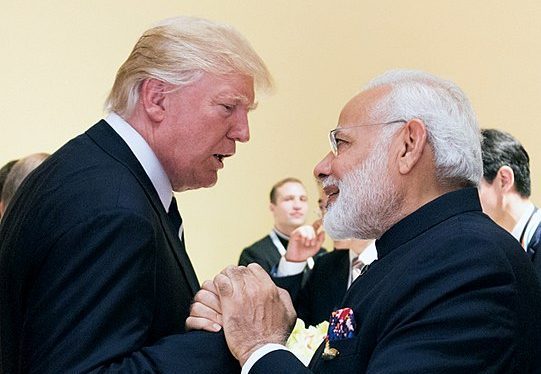 President Donald J. Trump shakes hands with Prime Minister Narendra Modi on July 7, 2017. Columnist Neshmia indicts the Indian government for its poor treatment of the Kashmiris and urges the U.S. to reconsider its solidarity with India.

Over the course of a half-century, a marginalized group of people has been at the center of an ongoing dispute between India and Pakistan: Kashmiris. The Muslim-majority region has been exploited by the two rival countries for years when Kashmiris have consistently sought to govern themselves.

On Aug. 5, the Indian government removed what is known as Article 370 from their constitution. This article allowed the state of Kashmir to have its own government and the freedom to make its own laws. The elimination of this essential law — that gave the Kashmiris a sense of pride — created an uproar among the Kashmiri people.

So why did the Hindu-nationalist Bharatiya Janata Party inflict this injustice upon the Kashmiri people? It’s no secret politics play a crucial role in this blatant discrimination. The BJP has been fervently anti-Muslim for a very long time, and this recent step was simply a move by Prime Minister Narendra Modi to continue to persecute the marginalized community.

The removal of this article highlights a continuing injustice against the people and is coupled with the absence of any Muslims in a Parliament of 303 lawmakers. It may sound conclusory to decipher Modi’s actions as being inherently prejudiced against Muslims, but India’s new “anti-Muslim” law serves to prove my point.

On Dec. 11, the Citizenship Amendment Bill (CAB) was passed in the Parliament, granting citizenship to religious minorities but excluding Muslims. This new rule singles out the Muslims who make up 15% of India’s population, allowing them to be legally discriminated against and persecuted. This is a strategy by the Hindu-nationalist government to polarize a vibrant country that is religiously and culturally diverse.

As a society, we are prone to raise awareness about issues for a week, then continue to go about our lives, forgetting these events are still happening. As a Muslim of Kashmiri descent, these issues affect me personally, despite my being across the ocean. Watching a region my grandparents have told me miraculous stories about exploding into calamity makes their stories a beautiful dream I will never be able to experience.

A government that likes to claim institutionalized dehumanization is an act to improve the economy of a country is familiar to us as Americans. To stand in solidarity with a government that endorses the outright oppression of a group of people is comparable to what is happening on our own grounds, from popular support for a border wall to detention camps.

To sell the human rights of others for economic and political expediency shows where a nation’s true priorities lie: not in humanity, but in convenience.

Neshmia is a sophomore in Media.