Opinion | Is Illinois a football or basketball school? 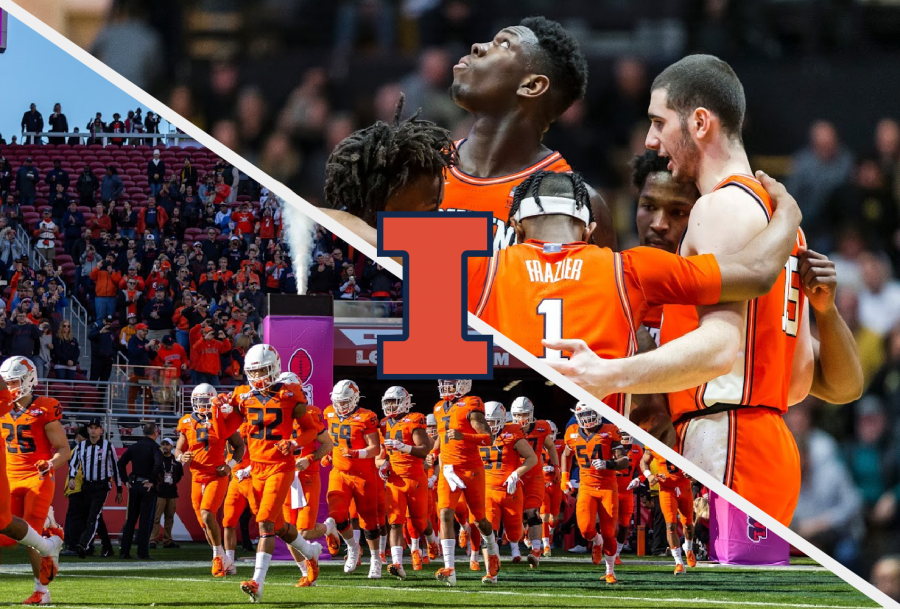 Left: The Illini football team runs out onto Levi’s Stadium for the Redbox Bowl in Santa Clara, California, on Dec. 30. Right: Illinois freshman center Kofi Cockburn looks at the scoreboard late in the second half at Mackey Arena on Tuesday.

When not cramming for the next exam or hanging out with friends, students here at the University enjoy cheering on the Illini to victory. Out of all 21 varsity teams on campus, football and basketball almost always rank toward the top in popularity among students.

While both teams make the experiences at Memorial Stadium and State Farm Center respectively memorable, Illinois has still not decided which team adorns the first place spot.

Besides the first two wins against Akron and Connecticut, the 2019 football season looked to be finished when the team suffered losses to Eastern Michigan, Nebraska, Minnesota and Michigan consecutively. The team’s losing streak ended on Homecoming Weekend last October when Illinois defeated Wisconsin in an upset 24–23 victory with a last-minute field goal.

That game began a four-game winning streak when Illinois soon picked up victories against Purdue, Rutgers and Michigan State. Although it was the team’s last win of the season, the game in East Lansing advanced them to play in the Redbox Bowl in Santa Clara, California, on Dec. 30.

In what was another season of building and growth for head coach Lovie Smith and his team, the question of whether Illini football could be the sport Illinois is known for was raised. But are we considered a football school?

The winter months countered the thought as the basketball team continues to impress fans. Thus far, with the help of sophomore guard Ayo Dosunmu and freshman center Kofi Cockburn, the team’s record currently sits at 16-9. Under the direction of head coach Brad Underwood, the team held a winning streak of their own, defeating seven Big Ten teams before losing to the Iowa Hawkeyes on Feb. 2.

With the team doing so well, the next three home games are already sold out. Fans are excited to see the Illini in action, which raises another thought: Is Illinois known as a basketball school?

Since the beginning of the football and basketball programs over a century ago at Illinois, both clubs have each had their own time in the spotlight. With 15 Conference titles and 18 Bowl game appearances, the football program also paved the way for greats like Red Grange and Dick Butkus. With five Final Four appearances, the basketball program has kick-started the careers of players including Kenny Battle, Nick Anderson, Kendall Gill, Deon Thomas, Deron Williams and Dee Brown.

Maybe the question of which program the school should be known for should not even be debated. Illini fans love both teams with equal pride and will no doubt continue to cheer them on to victory in the future.

Illinois sports will always be one of the many staples of a great institution. Ranking one team at the top position may sound fun to do, but both teams have proved otherwise.