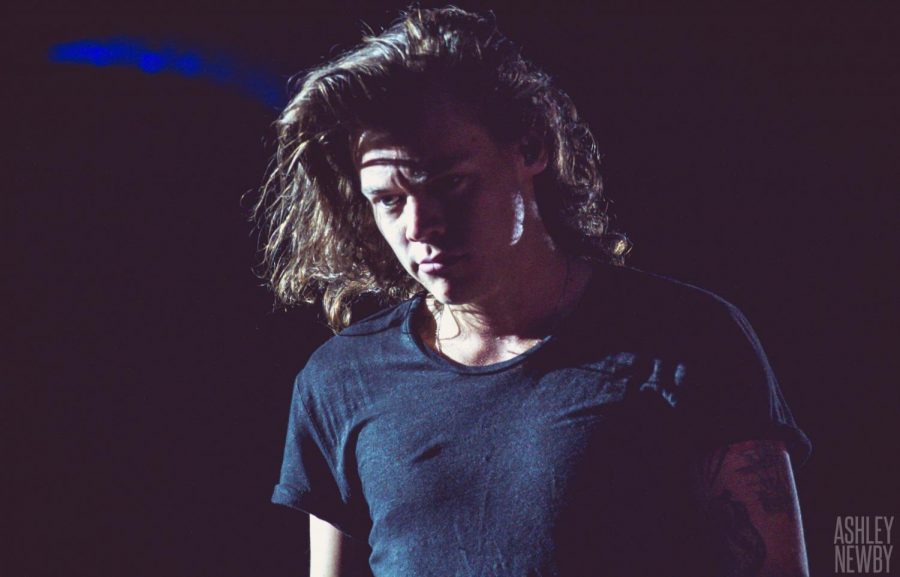 Singer Harry Styles looks off into the crowd during a show at Soldier Field in Chicago, IL on August 23, 2015.

The first breaths of spring have started to emerge. In between the days where the soft glow of sunlight and the chirping of birds are the first things to overwhelm my senses, and their rumbling counterparts of thunderstorms and gloomy nights put me to sleep, I’ve found myself listening to more and more music.

And on the days where the weather permits me to sit under the growing shade of blooming trees, Harry Styles’ “Fine Line” album seems to constantly cycle. But behind this album that perfectly captures the ups and downs of life lies a man we can all learn valuable lessons from.

The former member of One Direction, Harry Styles, first rose to stardom in 2010. But he has since changed from the shy, curly-haired 16-year-old who first auditioned for the British X-Factor to a 26-year-old who is one of the biggest artists out there.

After One Direction’s break in 2015 and the start of his solo career in 2017, Styles has built his image on the phase “Treat People With Kindness.” At seemingly every show, he reminds his audience to do whatever makes them happy and to be themselves.

Thankfully, he practices what he preaches. He is constantly unapologetically himself by breaking away from gender norms that many people still seem to perpetuate. Styles can constantly be seen sporting brightly colored nail polish and wearing clothes traditionally considered feminine.

On his first solo tour, he frequently waved the pride, bi, trans and Black Lives Matter flag, demonstrating to his audience that he supports them no matter their race or sexual orientation. And while on tour in Stockholm, Sweden, Styles conveyed this to his audience by saying, “If you are black, if you are white, if you are gay, if you are straight, if you are transgender — whoever you are, whoever you want to be, I support you. I love every single one of you.”

When at one of Styles’ shows, for however long it lasts, he gives his audience refuge where they can truly be themselves without the pressure and expectations to act a certain way that many often perpetuated outside of the venue.

Styles isn’t just a role model because he supports his audience no matter their racial, ethnical or sexual identity. As a privileged white man with a continuously growing following, he understands the implications of his words and is seemingly always checking his privilege.

In an interview with The Rolling Stones, Styles said, “I want to make people feel comfortable being whatever they want to be. Maybe at a show you can have a moment of knowing that you’re not alone. I’m aware that as a white male, I don’t go through the same things as a lot of the people that come to the shows. I can’t claim that I know what it’s like, because I don’t. So I’m not trying to say, ‘I understand what it’s like.’ I’m just trying to make people feel included and seen.”

And besides constantly assessing his privilege as a wealthy white man, as someone who is aware of his predominantly young female following — even when put in situations where it would be easy to do so — Styles persistently refuses to demean and sexualize women.

In an interview with Ellen DeGeneres where Styles was asked to answer some “burning questions” with the first thing that comes to mind, DeGeneres asked, “What are your three favorite body parts on a woman?” Instead of reducing women to just their looks, Styles responded by saying, “Eyes, smile and character,” instead of a crude and graphic response.

Music has a way of empowering people, but the artist behind the music is just as important. Seeing a prominent figure continuously willing to unapologetically be themselves and be so open about their own vulnerability (something that’s very apparent in his music), while also being socially and politically aware, has made me feel comfortable doing the same.

While this may appear like another fangirl ranting about how much they love Harry Styles, the lessons he preaches and the way in which he practices his own words is something everyone can be inspired by. So, take a lesson from Styles — don’t be afraid to be yourself. Do what makes you happy and treat people with kindness.