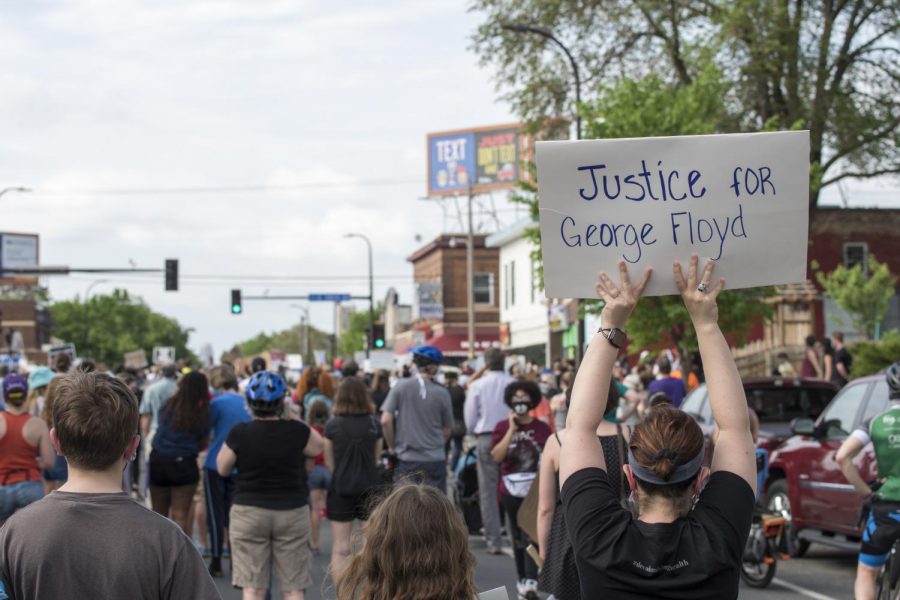 Demonstrators gather in Minneapolis, Minnesota to protest the death of George Floyd on May 26.

The unwarranted, excessive and oftentimes illegal use of force against civilians by American police officers is unfortunately commonplace. Currently, we’re indoctrinated with racism by a system that serves to protect the white people of this country.

The weaponization of whiteness and the sorting of Black stereotypes that white people created to maintain the structures of inequality intact is killing Black people. And by remaining actively silent, an action that speaks louder than words, white Americans become complicit in the murder of the Black community.

Since the beginning of our country, being Black has been a death sentence. For generations, Black families have been sending their loved ones out into the world with the justified fear that they might be the latest victim of a racist police officer’s actions.

And while Black parents teach their children how to act if they are ever pulled over or stopped by the police, white people in the U.S. are taught how to use their privilege in a way that benefits them from the subjugation of Black bodies.

For example, on the same day that George Floyd was murdered in Minneapolis, Minnesota, a video went viral of a white woman, Amy Cooper, calling the police on a Black stranger, Christian Cooper in Central Park, New York. The threatening act that prompted her to call the police? A request to put her dog on a leash.

In the video, Amy Cooper is seen telling Christian Cooper, “I’m taking a picture and calling the cops. I’m going to tell them there’s an African-American man threatening my life.”

Since the release of that video, Amy Cooper, in comments to CNN, said, “I’m not a racist. I did not mean to harm that man in any way.” But whether she wants to admit it or not, she was aware of the injustices and the systemic racism that threaten Black lives.

She understood that the police exist to control Black bodies and to protect white ones. She knew the words to use to signal to the police that a Black body had stepped outside the confines of what was permitted. She recognized all of this and was willing to weaponize it in a heartbeat.

Before police even arrived on the scene, by using a distinct tone and set of words, Amy Cooper manipulated the situation to paint herself as the victim and endangered a Black man’s life without thinking twice.

While Christian Cooper, George Floyd and many others have had their stories shared across social media platforms, the sad reality is that what happened to them has happened to generations of Black Americans. And there are still millions of victims of police brutality that aren’t recorded and that don’t become hashtags.

Many white Americans have trouble expressing and voicing their opinions on matters that involve race, discrimination or privilege. Many, for any number of reasons, choose to stay silent. But silence is not passive. In remaining quiet, they are actively engaging in white silence.

According to Marianne DiMascio, “White silence is experienced by members of the white culture who, during discussions of racial issues, experience negative emotions including guilt and anger. When these feelings are not addressed, whites begin to resist certain content areas. This resistance takes on the form of white silence.”

Our largely segregated society is set up to insulate whites from racial discomfort so that when these issues are brought up, there is a knee-jerk reaction of white defensiveness.

According to the author of “White Fragility,” Robin DiAngelo, “it seems to be virtually impossible … for the average white person to look deeply at their socialization, to look at the inevitability of internalizing racist bias, developing racist patterns and having investments in the system of racism — which is pretty comfortable for us and serves us well.”

Non-Black people must do better than that.

Take an honest look at your discomfort, your learned anti-blackness and ask yourself how you’ve remained complacent in the murder of Black people.

In her book, DiAngelo explains how this discomfort toward issues involving race and privilege, also known as white fragility, holds racism firmly in place.

She also argues that white people cling to the notion of racial innocence, a form of weaponized denial that positions Black people as the “havers” of race and racial knowledge.

Because of this many white people believe it’s solely the job of people of color to dismantle a system of racism and discrimination that they didn’t build and that wasn’t built to protect them.

It’s just as much, if not more, your job as a white American to take action and not remain complicit. It’s long past time to play your part in destroying white supremacy, silence and fragility and everything that upholds them.

Currently, police in Black and brown communities are armed patrolmen, instead of members that are trained to protect. What we see as a result is a continuation of an unequal relationship that has been made worse by the militarization and the increase in firepower of police forces around the country.

And it also doesn’t help that, as explained in the show “Patriot Act,” hosted by Hasan Minhaj, many officers are trained to fear the communities they are supposed to be protecting.

If you’re a white person who doesn’t take action against racism, or if you’re someone like Amy Cooper who uses their whiteness to manipulate a situation, the fact is you’re playing an active role in the murder of innocent Black people.

So take action by opening your eyes to your learned anti-Blackness, paying attention to your white privilege, speaking up and arguing with other white people, amplifying the voices of people of color, confronting racial injustices even when it’s uncomfortable and being more than just “not racist,” but also actively anti-white supremacy.

You can also check out blacklivesmatters.carrd.co, a website that lists ways to get involved such as signing petitions, calling District Attorney offices and donating to victims, protestors and Black-owned businesses.

As a white American who bears witness to the atrocities happening to people of color on a daily basis, you have to ask yourself, are you okay with being a part of the legacy of white supremacy with your inaction and silence?

Abril is a sophomore in the College of Media.