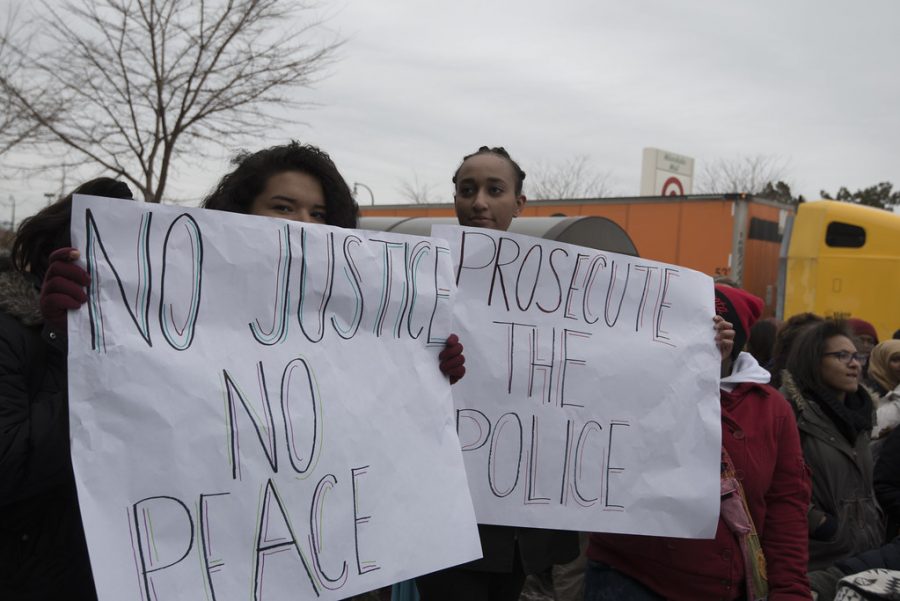 Protesters hold homemade signs at a demonstration following the death of George Floyd.

“He who passively accepts evil is as much involved in it as he who helps to perpetrate it. He who accepts evil without protesting against it is really cooperating with it.”

Despite protests being the expected response to racially motivated police killings, this Martin Luther King Jr. quote is resonating more with the American people now than ever before. In the first week since George Floyd was murdered by former officer Derek Chauvin, protests in Floyd’s memory have taken place in every single state.

The unprecedented coalition of protests is reflective of the American people being collectively fed up with the disproportionate police brutality toward African Americans and the systemic racism it stems from. It is difficult to recall a similarly widespread movement of protests since the Civil Rights Movement of the 1960s.

The protests have imposed pressure on politicians to respond with legislation that combats police brutality, with some progress already materializing. Colorado is presently in the process of passing a bill that would mandate police departments statewide to ban chokeholds, log every use of force and require more concrete reasoning for stopping civilians, among other amendments. New York has just passed a bill that proposes similar reforms within police departments and will soon be signed into law. Minneapolis will likely implement liability insurance for its officers and hike the rates of those who engage in unnecessarily aggressive conduct, while many city council members have shown support for disbanding an entire department for a complete rebuild.

While the developments toward police reform in certain states and House Speaker Nancy Pelosi’s anticipated “sweeping police reform bill” are encouraging news, political pressure from protests alone will not result in the kind of change required to exterminate such a deeply rooted problem in this nation. Those who desire to disrupt the cyclical racial injustice that festers in the United States must carry over their energy from the protests into greater political participation.

People can only protest for so long. As the nationwide protests for equality begin to dwindle, so does the pressure put on politicians to respond with legislation. Lasting change can only be achieved if people care enough to take their civic duties as voters seriously.

Voting is arguably the most direct way to affect tangible change. While most focus is given to presidential elections — and admittedly, it would be preferable to have a president that strives to unite rather than divide his people in such turbulent times — local elections have the most bearing on how police brutality is fought.

Local positions like state and district attorneys are responsible for investigating instances of police misconduct and charging culpable officers, and both are elected positions. Illinois determines the number of state attorneys by how many counties exist within the state, of which there are 102. That’s 102 state’s attorney positions up for election every four years — 102 recurring opportunities for change in Illinois alone.

Calling one’s representative and demanding them to make police misconduct an issue of focus is another effective strategy. If a representative is told by a sizable portion of his or her constituency that receiving their votes depends on the backing of police reform bills in Congress, the representative has hardly any choice but to comply.

Too many times has protesting policemen’s killing of unarmed black people resulted in lackluster long-term resolutions. To enact enduring change, the American public must utilize political participation to its utmost capability — in electing attorneys, pressuring representatives and voting for a president who doesn’t prioritize personal photo ops over the people’s constitutional right to peacefully assemble and call for change.

America is at a tipping point in the fight against systemic racism, and it’s up to the people to pair their words with political action and ensure the country tips in the right direction. Through the vexation of a perpetually divisive political climate and a global pandemic confining many to their homes, a perfect storm has emerged. People are tired of the insufficiency of their political leaders in addressing racial injustice; they’ve got all the time in the world to let those politicians know it.

If this kind of momentum fails to carry into the polls and beyond, the storm will dissipate and this country will continue to prolong the pernicious drought that is systemic racial inequality.