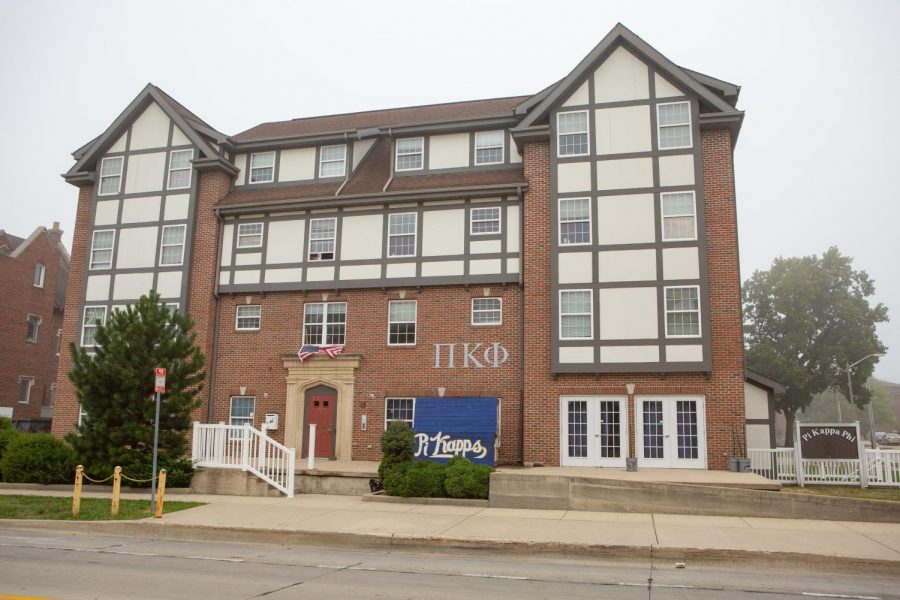 The Pi Kappa Phi fraternity house, located across the street from the SDRP on Gregory Drive, stands tall on Wednesday morning. Pi Kappa Phi was one of the greek organizations recently caught violating COVID-19 policies.

The recent release of Chancellor Jones last Massmail is a surreal wake-up call to many in the University community. In our attempts to understand how the University is just as susceptible to shutting down prematurely as any of our higher institution counterparts, students are finding themselves in a finger-pointing frenzy.

Pondering everything that has gone wrong in the past few weeks brings to mind a few key events.

Greek life, referring to the social and academic organizations students join for communities, common philanthropic goals or career networking, is inherently problematic. It often requires thousands of dollars in dues per semester once you get in — that is, once you are selected by your peers and make it through the outfits, hazing and gratuitous recruitment process.

All of its systemic issues aside, Greek life at the University is an obvious reason for the skyrocketing cases we’re seeing now. For many of us, it’s been about two weekends on campus. The fact that fraternities have already shown how little they care about doing their part in keeping others safe reflects incredibly poorly on their supposed morality.

And beyond that, Greek life executives had virtually no game plan for the inevitable positive cases that were to follow this reckless socializing.

I had the opportunity to interview two fellow students involved in a social sorority on campus, and hearing their experiences trying to get out of their living situation was enough to make my blood boil.

Many of these girls are living in houses with somewhere from 40 to 50 other girls. To put that into perspective, I am enrolled in two laboratory classes this semester, neither of which will exceed 10 to 15 people in a lab space at any given time for the sake of social distancing.

The very idea of communal bathrooms, buffet-style kitchens and no single rooms seems unthinkable in the age of a pandemic. And yet, these are the realities for people living in Greek housing unless they either drop their organization entirely (with no refund) or subject themselves to a lengthy appeals process to an executive housing board made up of mostly untrained volunteers.

It also seems as though positive cases are brushed to the side as a first instinct — members have been told that if they test positive, they should make arrangements to go home.

What about people whose grandparents live with them? Whose parents have long-term health ailments? Who don’t have a way of getting home at the drop of a hat, or who are just scared for their own safety?

The worst part is that these questions have been raised, and many times girls are being told that they’re being disrespectful or even that they’re overreacting.

Is it unjustified to react with cautionary worry over something that has killed over 200,000 people in the U.S. alone and over 900,000 people worldwide? What cost are we willing to pay in the currency of human life for the sake of social establishments and party culture?

I’m not sure what part of forcing students to stay in housing contracts they signed before a pandemic aligns with these organizations’ philanthropies, but it’s time to hold executives accountable the same way we’re holding students accountable for their own quarantine and isolation when they test positive.

This introduces the trickiest angle of responsibility to examine: It’s true that it’s up to all of us to do our part, but to say this without holding University authority accountable is a hollow attempt at making the situation seem helpless. The truth is, the University could be doing much more in the way of making sure positive cases are isolated within a certain time frame, and holding students to disciplinary action if they don’t comply.

Additionally, it shouldn’t be up to members of Greek houses to be responsible for the actions of their many peers. Full-time students do not have the time to be on mask patrol.

Ultimately, Greek life should not have even opened their houses this semester, and putting the lives of their members in danger for the sake of preventing a few budget cuts is immoral and completely devoid of sound judgment. The parties that have followed simply provide a sickening echo of this decision.

Tara is a sophomore in LAS.