Opinion | American healthcare is a joke 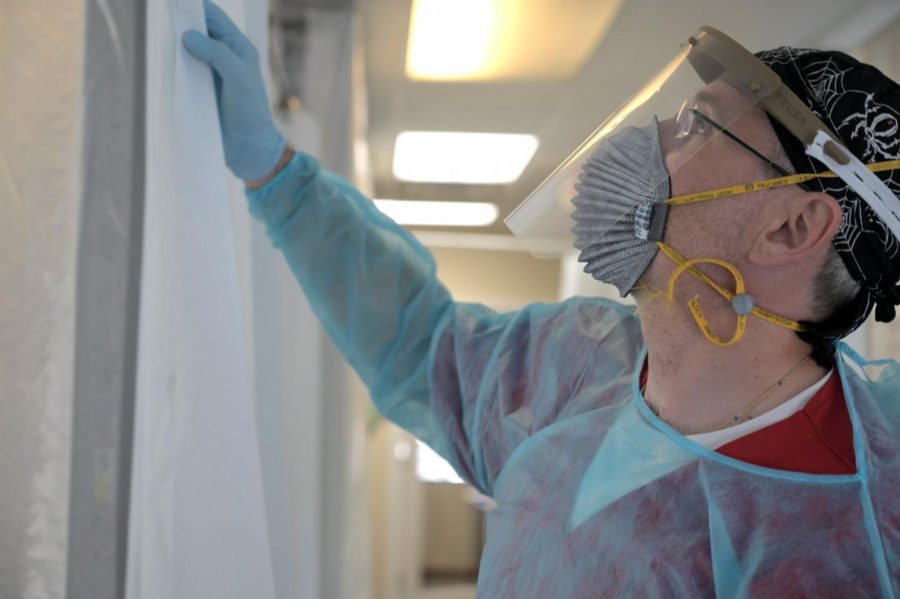 Dr. Ron Elfenbein reaches for a curtain at one of his cubicles, as he is among more than 120 doctors now offering rapid COVID-19 tests in their offices. Columnist Maii critiques the United States health care system, calling it a joke.

The American health care system is honestly just embarrassing. The United States of America prides itself on being a developed country with opportunity. That’s probably why many people want to immigrate here in order to have a better life.

However, if I was old enough to put in my two cents when my parents moved our family to a different country, I would have asked to go to Canada, Switzerland, the Netherlands or literally any other developed country.

The United States does not even breach the top 10 best countries for health care. America’s health care quality and access (HAQ) index rating is the worst when compared to equally developed countries.

Just look at how the United States government and leaders have handled this pandemic that is still raging wild in many states as we speak. Precautionary measures, such as the existence of the United States pandemic response team, had been cut in 2018 when the Trump administration decided they would rather focus their funding elsewhere.

That really turned out great for us didn’t it? Pandemic aside, America’s health care is unaffordable, unattainable and discriminatory.  America has turned the safety and health of its people into a for-profit industry that takes advantage of the people they are meant to help.

Other countries consistently implement laws and regulations that limit how much a company can price their items. Unsurprisingly in the U.S., that is not the case, and therefore something as mild as a peanut allergy can be the cause of your death if you’re not willing to cough up nearly $700 for just one EpiPen.

Health care in the United States, much like many other basic human needs, is treated as a privilege rather than a right we are all entitled to. Although it is joked about on social media platforms, the fear of having an ambulance called for you is far more serious than the jokesmade. It is a genuine fear for many.

In America, the average cost of an ambulance ride can reach up to $2,200. At that point, I don’t care about whether or not I’m surviving, I’m thinking about the bill. The hospital itself also charges a ridiculous amount for treatment, so even if I’ve survived the Uber ride to the emergency room, I can still expect a hefty bill.

Most embarrassing of all, the United States health care system is ridiculously discriminatory, especially to people of color. If you are a POC, especially a Black woman, you are more likely to experience more illnesses while also being less likely to receive treatment.

Although the doctors themselves may not be outwardly racist, the system in and of itself is inherently and systematically racist. An anecdote from Dr. Monique Tello reads, “They treated me like I was trying to play them, like I was just trying to get pain meds out of them. They didn’t try to make any diagnosis or help me at all. They couldn’t get rid of me fast enough.”

This awful experience is unfortunately, one held by many POC. Salome Karwah, a nurse who survived Ebola passed away from pregnancy complications. Kim Porter died of a cardiac arrest after telling doctors for weeks that she didn’t feel well. How does one of the most developed countries have such a high mortality rate?

Shishi Rose stated that she “could barely walk due to pain from (her) ovarian cysts, (the doctor) shoved the internal ultrasound with no warning and said, ‘most women don’t feel ovarian cysts,’ . . . and sent (her) home with no medication.”

Although times are changing and many people are willing to look into the issues that have raged long in the U.S., this is an issue many people in power choose to ignore, since the system in place benefits them and their policies.

It is time that the United States of America recognizes that they have a responsibility to help their people and not leave us to the wolves of insurance companies and overpriced health care. Once someone finally takes the lead on this issue, when public officials brag that America is a great country, they won’t be lying through their teeth.

Maii is a sophomore in LAS.