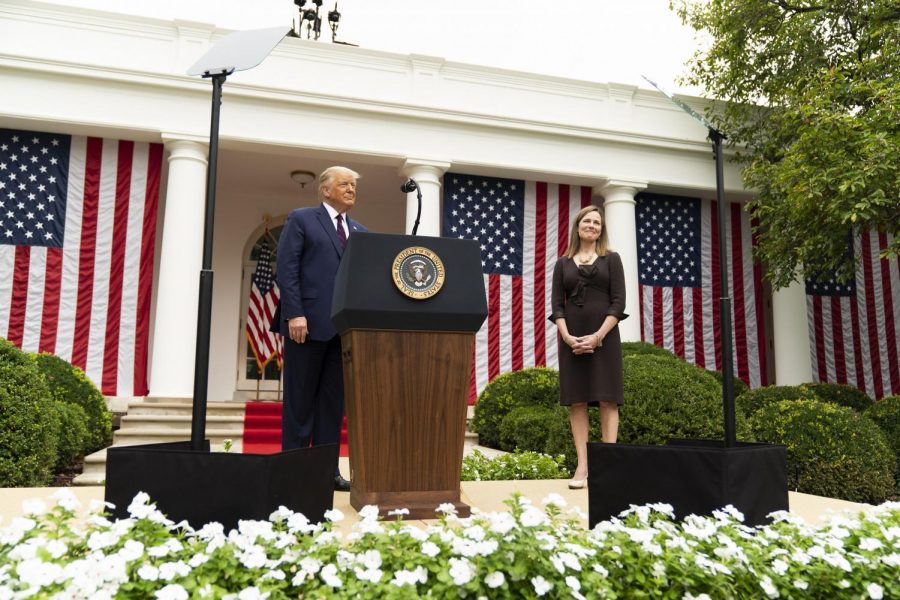 President Donald J. Trump announces Judge Amy Coney Barrett as his nominee for Associate Justice of the Supreme Court in the Rose Garden of the White House on Sept. 26, 2020.

On the evening of Monday, Oct. 5, President Donald Trump was ceremoniously transported via Marine One from the Walter Reed National Military Medical Center back to the White House.

It was no surprise that Trump chose to leave Walter Reed in the evening — when more people are watching television; he used the situation as a chance to declare victory against his COVID-19 infection to the American people. Trump said in a video on Twitter that he now felt “better than (he) did twenty years ago.”

Trump’s supporters too were eager to downplay the president’s COVID-19 infection and promote the narrative that he had already beaten the disease. Kelly Loeffler, a United States Senator from Georgia and notable sycophant of President Trump, tweeted a video of the president tackling COVID-19 to the ground and punching it repeatedly outside of a WWE ring.

Let’s be clear here: Trump may no longer be at Walter Reed Medical Center, but he is most certainly not out of the hospital.

That statement may appear baffling at first, but the White House actually has an entire medical wing just for situations like this one. The White House Medical Unit (WHMU), as it is formally known, is responsible for providing regular medical care to the president, the vice president and other White House staff.

The WHMU is a fully-fledged medical facility that can do just about everything short of performing major surgery, which only adds to the confusion over why the president was taken to Walter Reed in the first place. President Trump’s doctor and medical staff further added to this confusion by seeming to downplay the severity of the president’s condition, even as administration officials said privately that there was cause for significant concern.

Given that all of the treatments that President Trump reportedly received during his stay at Walter Reed — supplemental oxygen, the steroid dexamethasone and Regeneron’s experimental antibody therapy — could almost certainly be continually administered to him from the WHMU going forward, we can call his sudden journey back to the White House what it really was.

Just like the rest of the Trump presidency — and indeed the entirety of Trump’s life — this was nothing more than a cheap publicity stunt.

That fact in and of itself is not unforgivable. Politicians love to put a positive spin on anything and everything that may affect their political fortunes, and Trump is no exception. But this is different. Not only is Trump obviously lying to the American people by pretending to have already beaten COVID-19 — which is wrong — but he is putting lives in danger by downplaying the potential severity of the virus. He said in a statement after leaving Walter Reed, “Don’t be afraid of COVID.”

It is not uncommon for COVID-19 patients to be sick with the disease for weeks, and it will be interesting to see whether or not President Trump’s condition really improves in the coming days and weeks ahead. I truly hope he gets better. No matter how incompetent of a leader I think Trump is, I would never wish the man poor health or anything worse.

It will be even more interesting, though, to observe how the electorate — which by most all indications is already fiercely opposed to Trump — will respond if the president’s health condition worsens as his body continues to fight COVID-19. This would be a clear signal that when Trump left Walter Reed and returned to the White House, he was either severely mistaken about the state of his own health, or he was lying about it.

I severely doubt the American people will reward him at the polls on Nov. 3 if either one turns out to be true.