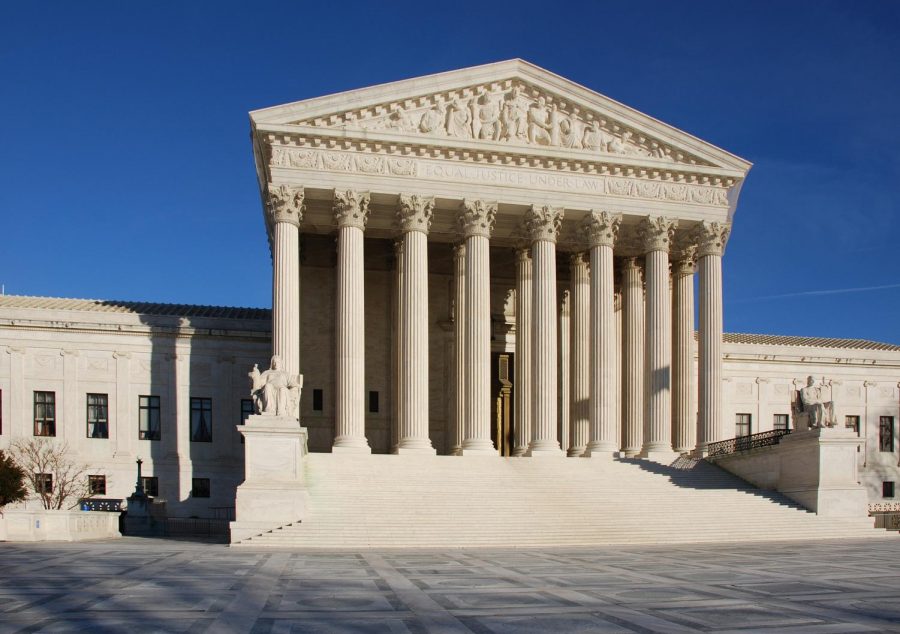 The Supreme Court Buildings stands tall on a sunny day.

As we mourn the passing of former Associate Justice Ruth Bader Ginsburg, her judicial philosophy and that of her potential successor, Justice Amy Coney Barrett, once again gain national attention.

Great as Ginsburg may be in her perseverance with issues of feminism, gender equality and minority rights, I disagree with her philosophy of judicial activism and believe the U.S. may be better without it.

The political system of the United States, also their known as the trias politica, may be the most intelligently designed government in human history; it has embodied the basic principles of democracy for over two centuries and allows our country to flourish.

However, the balance of power of three branches is naturally unequal. Such a situation inevitably raises people’s concerns about the alliance of two against one.

Our founding fathers also considered the same question in Federalist Paper Article No.78: “It proves incontestably that the judiciary is beyond comparison the weakest of the three departments of power; that it can never attack with success either of the other two; and that all possible care is requisite to enable it to defend itself against their attacks.”

The authority of the judiciary as we know it today, however, was not established until Marbury v. Madison, in which Chief Justice John Marshall concluded it is the judges’ duty to review the constitutionality of laws.

The supreme authority of a state ought to have its judicial authority constituted so as not only to depend on it, but must also balance it; for only thus can we be saved from the tyranny of the majority and enjoy real justice and equality. A judiciary with no authority can never be independent, and justice without independence is unjust.

However, concerning the overwhelming power of the legislative and the executive branches, we should be similarly cautious, if not more so, of the same dangerous tendency of the judiciary. It is more difficult to hold the judiciary accountable for its decisions than elected politicians. Similarly, the public tends to invest more trust in the courts than in Congress due to the supposed moral superiority of the judiciary.

Different to a seat in Congress or the highest office of the State, sometimes occupied by the mediocre, only people with unshaken adherence to principle against every allurement of interest and exceptional professional knowledge in law can fill a seat in the courthouse. Only upon them can we bestow a job with such profound significance as to protect our constitutional system.

But, for the same principle, judges must be extremely deliberate and punctilious with their authority. Otherwise, one incompetent incumbent judge could prove more influential than another representative due to seniority. The public, consequently, may begin to distrust the entire judicial system.

Thus, it is self-evident why we need to avoid judicial activism. When the supreme judicial authority is necessary, “sed quis custodiet ipsos custodes?” In other words, nothing guards the guardians but conscience and loyalty to the law itself.

On the basis of common law, judicial activism fundamentally opposes the principle of democracy: using judicial decisions to replace legislative acts contradicts the idea that all laws should be proposed, discussed and voted on democratically.

Notwithstanding the conscience and professional capability of the judges, their viewpoints on specific topics are insufficiently representative of those of the public. Even if some legal provisions are believed unsuitable to the progressed society, the election of the House of Representatives, held every two years, is frequent enough to reflect the evolving positions of the electorate.

Congress can itself solve the problem of antiquated legislation; the involvement of the judiciary is not only unnecessary in these matters, but also threatens the balance between the three branches.

The arguments over judicial activism concern reconstructing the balance of power as defined by our Constitution in the spirit of federalism. Without judicial activism, our political system will be more balanced, fewer issues will be hyper-politicized and our democracy will be better ensured.