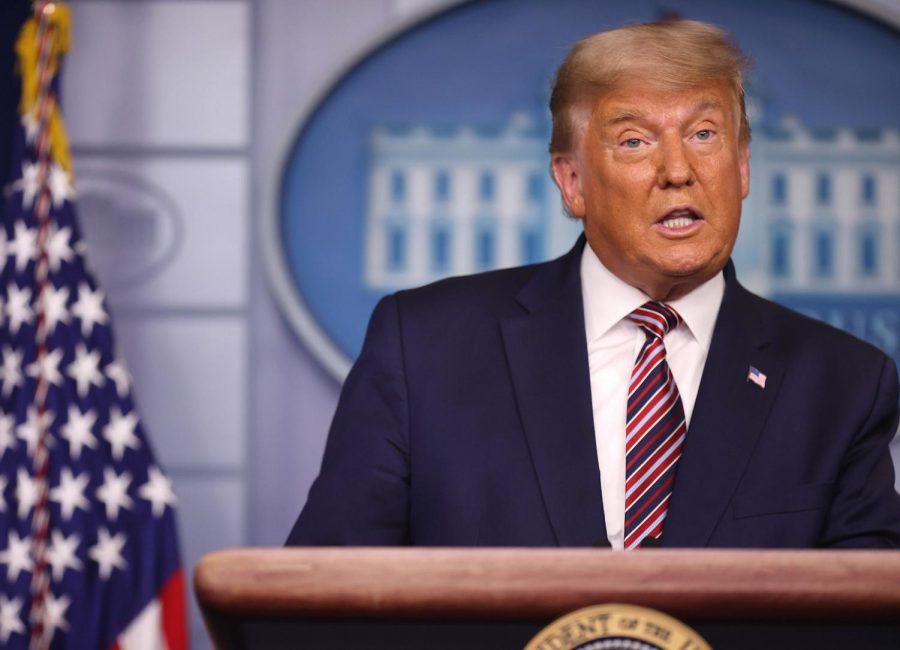 President Donald Trump speaks in the briefing room at the White House on Thursday. Columnist Clint argues Joe Biden’s victory is just the beginning when it comes to making impactful changes in a broken America and that Democrats must pass meaningful progressive reforms.

That was close, America. Too close. No longer a “blue wall,” the three key electoral college states of Michigan, Wisconsin and Pennsylvania seem to have become what would more accurately be described as a “rickety, worn-out blue fence.” These states held up for Joe Biden in the end, but the results were anything but encouraging.

Michigan, Wisconsin and Pennsylvania — as I have written before — are the reason why Hillary Clinton failed to become president in 2016, but they are also the reason why Joe Biden actually has become the presumptive president-elect this time around. Clinton lost those states to President Donald Trump by less than 80,000 votes in 2016.

So far, Biden is winning them against Trump by more than that margin, but not by much more. The fact that President Barack Obama won all three of the aforementioned states so resoundingly in both 2008 and 2012 is a terrible sign for Democrats of the way those states are trending electorally.

Because of this slow decay of upper-midwestern blue wall states, Democrats are going to have to pursue several strategies all at once if they hope to have any realistic shot of winning the presidency or Senate going forward.

First, Democrats will need to increasingly look toward other states to make up ground that may be ultimately lost in the rust belt. As I am writing this, it looks as though Joe Biden will be victorious in Arizona — which has now been called by both Fox News and the Associated Press — and in Georgia.

To be fair, Georgia is apparently headed for a recount, but this is highly unlikely to alter the ultimate outcome. Democrats will need to expand their coalitions within these states moving forward, focusing on groups like Latino voters in Arizona and suburbanites in Georgia.

Democrats will also need to actually deliver for the American people while they hold office. Too often it seems that Democrats are more concerned about losing future elections than they are about passing meaningful, progressive legislation and implementing progressive policies. This pattern of fear must cease if Democrats are to build a reliable path to the presidency or the Senate.

If voters have been willing to put Democrats back in the White House, Democrats owe it to them to fight like hell, tooth and nail, every single day for policy and legislation that genuinely improve the lives of the American people. I promise you, Democrats, if you produce meaningful change, voters will see this and reward you for it at the ballot box.

Finally, and perhaps most important of all, Democrats are going to need to do something about what I will refer to as the “woke” faction of the party.

I have written before about how badly Twitter represents what is going on in this country. Screaming at people who already agree with you because they refuse to be bullied, canceling anyone who does or says something wrong or has “imperfect” views and refusing to accept anything less than policies that many of the American people — and even Barack Obama — see as radical are all very bad ways to try and convince people they should vote Democrat instead of Republican.

Democrats should indeed push for progressive policies on voting rights, climate change, criminal justice, racial justice, health care, LGBTQ rights, income inequality and all the rest, but it is essential that this is done in an inclusive manner and that Democrats discourage this “all-or-nothing” mentality that has developed among the young, far-left wing of the party.

It is entirely possible to be progressive without acting so deranged that most of the country wants nothing to do with you. Just take a look at Andrew Yang, who is simultaneously the most likable and progressive candidate for president in history.

Expand the coalition in Arizona and Georgia, actually deliver meaningful change for the American people and keep the woke Twitter wing of the party from defining the narrative. That is a tough to-do list for the Democratic party, but every box must be ticked if the Republican party — which is now undeniably the party of Trump and will be for an unforeseeable length of time — is out of power in the White House and beyond.

With Trump defeated, Democrats appear to have won the day, but the real work of fixing a broken America and restoring faith in the Democratic party and in the United States government has just begun.

Clint is a senior in LAS