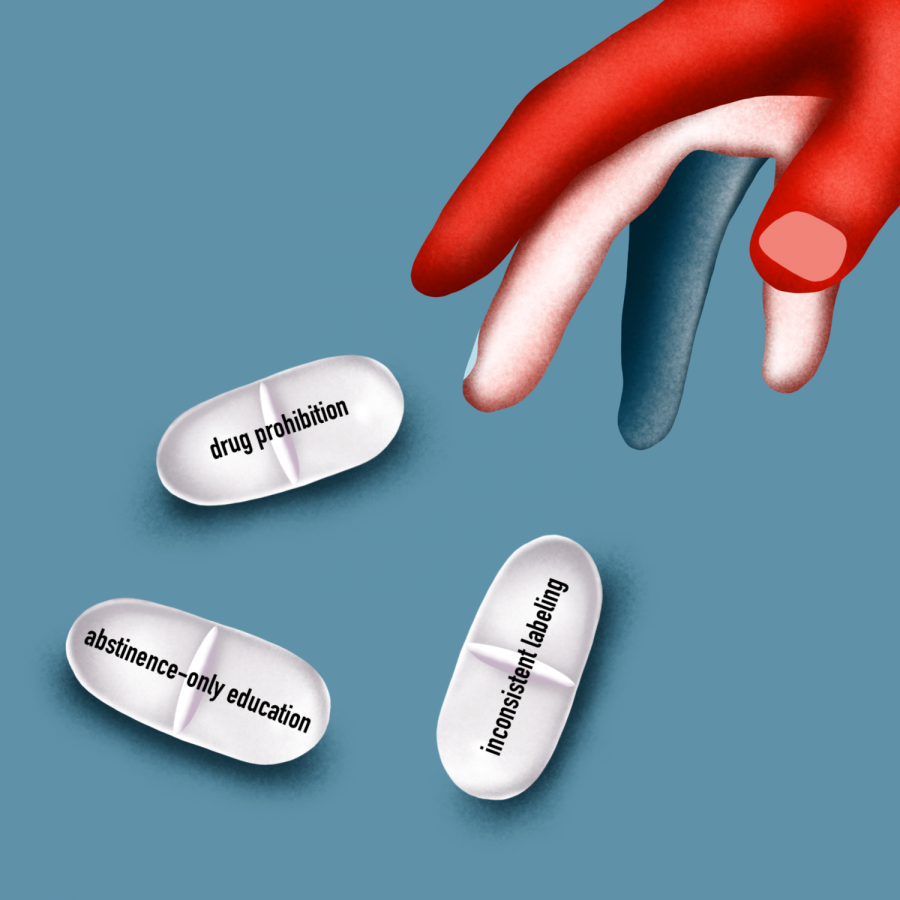 America’s drug problem is how it reacts and responds to drug addiction. It is how America poorly educates its people on recreational drug usage. It is also is how addiction is not met with empathetic rehabilitation efforts, but rather incarceration.

The problem begins with arbitrary substance classification in the United States.

One convention America gets right is that marijuana is a gateway drug. However, it is only a gateway drug because of how the U.S. government treats the substance — as a Schedule 1 drug (though oddly enough, not as a “hard drug”). If a person smokes a joint and finds it is not lethal or highly addictive, they may begin to believe other Schedule 1 drugs are comparable or that drugs classified as Schedule 2, 3 or 4 are less dangerous, which simply is not true.

While drugs that are not highly addictive, such as marijuana or psychedelics, are labeled as Schedule 1, substances that have been proven remarkably addictive are completely legal — substances like alcohol, tobacco and even sugar or caffeine.

Alcohol has been completely normalized and integrated into society despite being both potentially deadly and intensely addictive. Withdrawal from alcohol, unlike most other drugs, can kill a person. This is not to suggest a return to prohibition, but rather to highlight inconsistencies in America’s drug codes.

Additionally, the crackdown on drug usage can be ascribed to political history. One former Nixon operative maintained the reason marijuana had been maligned by the administration and crack cocaine had seen more severe sentencing than powder cocaine was because the crackdown on the substances gave cause to the administration to castigate Black Americans and those who opposed the Vietnam War.

Then, there is education on drug usage. Current curriculums surrounding drugs and drug usage demonize all substances and condemn any drug usage. Ostracization of this behavior has led to the exclusion of those who engage in this perfectly normal activity.

Education must be reinvented not to vilify those who partake in recreational drug usage but rather to encourage moderation and to be honest about the consequences as well as the potential mental health benefits. Abstinence-only drug education simply fails to provide students with a realistic set of life tools if they ever do choose to use drugs recreationally.

Drug addicts are not losers or outcasts. They are simply people who require help, not a prison cell and a punitive sentence.

Ultimately, America declared war on drugs and lost. Millions face incarceration for nonviolent possession offenses, America has a severe opioid crisis and, according to the Center for Disease Control, the number of drug overdose deaths was still four times higher in 2018 than in 1999 after trillions of dollars in spending trying to curb drug abuse.

Prevention efforts through education have failed, and response through excessive punishment has also failed. Therefore, drug laws require a societal overhaul, not more of the status quo.

How should the country better control substance use?

First, society must recognize there is a place for safe, responsible, recreational drug use. Decriminalization of all drug possession is a good start (which is not the same as dealing or distribution), but the legalization of most, if not all, substances would allow government agencies like the FDA to regulate these channels.

Otherwise, the black market will continue to thrive by fulfilling the demand for drugs the government refuses to acknowledge. No regulation and no constraints lead to no other outcome than a lack of control of the situation.

While the government should reduce the penalty for its controlled substances, it should match that new level of regulation vis-a-vis alcohol, tobacco, sugar and caffeine. These substances are addictive and sugar consumption has correlated with a worsening obesity epidemic, yet these substances are relatively unrestrained. All substances deserve the same moderate amount of market regulation.

Government legislation should not be used to moralize behavior as it has through drug laws. Regulation of these substances would not be a sanction or condemnation, but rather a reasonable way to fulfill market demand while safely controlling the distribution quantities, therefore limiting overdoses or addiction.

Needless to say, drug cartels would lose a lot of power without a bullet ever fired. Organized crime divisions would suffer from severed revenue streams. It is not too optimistic to argue legalization of substances undermines real criminal networks.

The legalization of all substances, albeit complemented by regulation, may sound radical. But when one reflects on the past century of failed American drug policy, one must conclude that regarding drug punishment, less is more.

At the very least, legislators must be open to drug policy reform, as the prohibition approach is antiquated and ineffectual.

Hopefully, sometime in the near future, America gets the help it desperately needs and is able to wean off its addiction to societally-harmful treatment toward drug users and usage.

Andrew is the Opinions Editor for The Daily Illini and a junior in LAS.